SONOMA COUNTY, Calif., Dec. 19, 2018 /PRNewswire/ -- Robert Chang, Managing Director and Chief Truffle Officer of American Truffle Company (ATC), the science-based cultivator of European black truffles in North America, has announced the first harvest of a Périgord black truffle (Tuber melanosporum) from the Otellini Truffle Orchard in Sonoma County, California, on Tuesday, December 11, 2018. This marks the first black truffle harvested in the U.S. resulting from application of a proven scientific methodology that is reliable and reproducible. 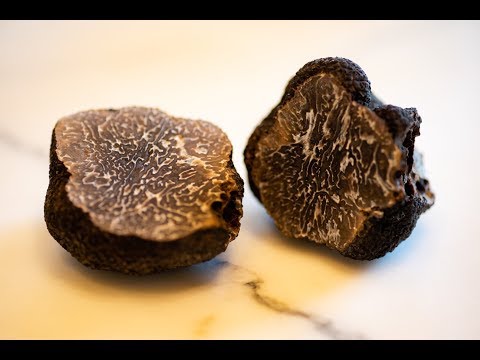 Estate owner Sandy Otellini was notified of the truffle find by her orchard manager Chris Majcherek, who discovered the truffle with Bella, his Border Collie who's been training to sniff out truffles. "My first reaction was: how big?" said Otellini. "It was a sensational moment."

The truffle was of substantial size, measuring three inches across and weighing in at 108 grams. It was harvested from trees inoculated by ATC with the black Périgord truffle fungus and rigorously managed following ATC's strict scientific protocols tailored to the specific microclimate and soil conditions at the orchard site, which was planted in 2011 by Sandy and her late husband, former Intel CEO Paul Otellini.

Chef Ken Frank of Michelin starred La Toque was present for the weighing in of the truffle and ready with ingredients on hand to whip up a dish of Sandy's favorite truffle pasta. "I always knew it would happen," said Frank. "But I didn't expect that my first Périgord truffle of this season would be from California. The perfume was tremendous. This is the real thing and a game changer for us chefs!"

"We're excited by the successful scientific cultivation of black truffles here in wine country," said Chang. "This achievement demonstrates our proven scientific methodology, and is indicative of future successes for all our North American truffle orchard partners."

Dr. Paul Thomas, ATC's Chief Scientist, was able to view the truffle from his office in Scotland. "This is brilliant," he said. "The success of our scientific truffle cultivation technology now spans four continents. I look forward to more harvests in North America as more of our truffle orchards mature."

Founded in 2007 by Robert Chang and Dr. Paul Thomas, American Truffle Company partners with North American land owners to create a custom-tailored approach for cultivating European black truffles that relies on years of scientific research and data from diverse truffle orchards in over 25 countries across the world. ATC expects to help meet the growing global demand for ultra-fresh, high quality and consistently-grown truffles for both professional and home chefs. For more information about the American Truffle Company, visit www.americantruffle.com.

ATC's Chief Scientist Dr. Paul Thomas is an internationally renowned mycologist who received his Bachelor of Science with honors in Natural Environmental Science from the University of Sheffield (England), followed by a doctoral dissertation focusing on long distance signaling pathways within the plant kingdom, which is central in truffle cultivation. During his studies, Dr. Thomas was awarded a university grant to commercialize and enhance the technology and system he pioneered to inoculate trees. He's since developed what is now the largest and most diverse range of truffle research sites worldwide, spanning four continents and a wide range of climatic and edaphic (soil) zones. The results from these ongoing sites have changed and challenged the traditional understanding of truffle biology. Dr. Thomas is also the lead researcher and Managing Director of Mycorrhizal Systems Ltd. in the U.K.

Chef Ken Frank, founder and executive chef of Michelin starred La Toque in Napa, has been cooking with truffles for over 35 years. Widely considered the top truffle chef of North America, he also holds the distinct honor of being the first and only American chef invited to participate in the Fiera Internazionale Tartufo Bianco D'Alba, where he was recently knighted by the Order of the Knights of the Truffle and Wines of Alba. Chef Ken is also the host chef for the annual Napa Truffle Festival.