SAN FRANCISCO, Jan. 24, 2019 /PRNewswire/ -- Today, Expensify, the world's most widely used expense management platform, released a new comedic music video, "Expensify This," featuring Grammy award-winning rapper and Def Jam Recordings artist 2 Chainz and actor Adam Scott. The music video, which takes a funny and elaborate twist on workplace expenses, is the world's first music video you can expense. From now until February 4, fans simply download the Expensify app and snap a photo of the various receipts in the video. Then, they submit the receipts for a chance to get actual cash or win the items themselves. Prizes range from an ice-sculpted sports car, an Audi R8 and a decked-out gold jet ski to a diamond-encrusted football and a gold 2 Chainz bust. 2 Chainz and Adam Scott will both also appear in Expensify's upcoming Super Bowl ad. 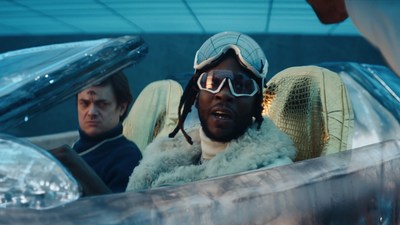 "Expensify This" is part of Expensify's new marketing campaign, "You Weren't Born To Do Expenses," developed by Emmy award-winning creative collective JohnXHannes New York (JXH). The comprehensive campaign kicks off this week with the world's first music video you can expense and will feature a :30 national spot in Super Bowl LIII, plus additional digital, social and TV content that will run through the 61st Annual Grammy Awards this February and beyond.

"This might shock you, but it wasn't my childhood dream to become an expense report magnate," said David Barrett, Founder and CEO of Expensify. "Like everyone, I want to do so much more with my life than file expenses, so I built Expensify to take away the mundane drudgery so you can do what you were born to do. That might be spending more time with your kids, traveling to foreign countries, trying to make the world a better place, or in 2 Chainz's case, making the most epic music video ever."

"Expenses used to take up more time and brain space than they deserve, until Expensify boldly solved this for everyone. With the brand's first-ever ad debuting at Super Bowl and a never-before-done music video, Expensify showcases their unmatched brave spirit. They're an ideal partner for JXH," said John McKelvey, Executive Creative Director of JohnXHannes New York.

"The world's first music video you can expense is basically the greatest and most fun product demonstration ever, and even better with legendary "Expensivest" 2 Chainz," said Hannes Ciatti, Executive Creative Director of JohnXHannes New York. "We want everyone to experience Expensify, so they can get back to what they truly set out to do," adds Ciatti.

A final prize will be revealed during Expensify's Super Bowl ad, a first-of-its-kind commercial you can expense. The spot featuring 2 Chainz and Adam Scott will air during the second quarter of the game and give a sneak peek behind the making of the "Expensify This" music video. The :30 spot was directed by DGA award winner Andreas Nilsson of Biscuit Filmworks. For a chance to take home the most elaborate prize of all, viewers simply snap a photo of the receipt in the TV commercial and upload into the Expensify app.

"So much creativity and collaboration went into making this video," said 2 Chainz. "It was really over the top and a lot of fun. I'm excited to be in the Expensify Super Bowl campaign and can't wait for everyone to see the spot."

"I've always wanted to be in a hip hop video and a Super Bowl commercial, so mission accomplished," said Adam Scott. "Thanks 2 Chainz and Expensify for making it happen."

ABOUT EXPENSIFY Founded in 2008, Expensify has quickly become the innovation leader in automated receipt and expense management with an easy-to-use mobile and web app. With entirely automated expense reporting processes and features such as patented SmartScan technology, company card management, and integrations with all major accounting software. Expensify has quickly grown to serve over 60,000 businesses globally. For more information, visit  use.expensify.com.

ABOUT JOHNXHANNES NEW YORK JohnXHannes New York is an Emmy award-winning creative collective that develops and produces insightful and impactful creative at the junction of culture, storytelling, and technology. Recently, the agency's feature film "Corazon" premiered at the Tribeca Film Festival and won the Cannes Lions Grand Prix. JXH has worked with Beats By Dre, Squarespace, Nike, Under Armour, Expensify as well as cultural influencers 2 Chainz, Serena Williams, John Malkovich, Gisele Bundchen and Michael K. Williams. Their work has been featured in The New York Times, Time, Vanity Fair, Vogue, and on CNN, and "The Tonight Show Starring Jimmy Fallon." JXH has been awarded the highest industry accolades for both creativity and effectiveness, including an Emmy, multiple Webbies, the Cannes Grand Prix, D&AD Pencils, Gold Effies, and has been honored by the United Nations. For more information, please visit  johnxhannes.com.