SARASOTA, Fla., April 24, 2018 /PRNewswire/ -- A small gold coin, mistakenly believed by its New England owner to be a fake, has been authenticated by rare coin experts as only the fourth known example of a $5 denomination coin struck at the San Francisco Mint during the California Gold Rush in 1854.  The historic rare coin was certified as genuine by Numismatic Guaranty Corporation (www.NGCcoin.com) in Sarasota, Florida, the world's largest rare coin authentication company. 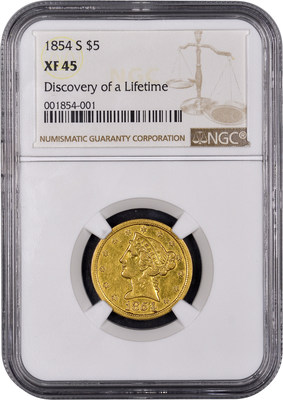 Slightly smaller than a modern quarter-dollar, the 164-year old gold piece now is estimated to be worth millions of dollars, according to NGC.

"It's like finding an original Picasso at a garage sale. It's the discovery of a lifetime," said Mark Salzberg, NGC Chairman.

"The owner of the coin is a life-long New England resident who wants to remain anonymous.  He was stunned when we informed him that it is a genuine, multi-million dollar rare coin. He had shown it to a few collectors and dealers at a recent coin show, but everybody said they thought it was a fake because until now there were only three genuine surviving 1854 San Francisco Mint $5 gold pieces known," explained Salzberg.

"Our initial reaction on examining the coin was utter disbelief that a rarity of this magnitude could still be discovered in this era," said NGC President Rick Montgomery.  "But upon seeing the coin in person for the first time it was apparent that the coin is genuine."

Collectors refer to U.S. $5 denomination gold coins as Half Eagles, and Mint records indicate just 268 of them were made in San Francisco in 1854, the first year that coins were produced there. Until now, only three surviving examples were known, and one of them is in the National Numismatic Collection at the Smithsonian Institution in Washington, DC. The Smithsonian provided a photograph of its coin to Numismatic Guaranty Corporation to assist with authentication of the one owned by the New England man, according to Salzberg.

Since 1987, Numismatic Guaranty Corporation experts have examined and authenticated more than 40 million coins. For additional information, contact NGC at 941-360-3990 or [email protected].