SARATOGA SPRINGS, N.Y., Oct. 10, 2019 /PRNewswire/ -- Today, health and wellness marketing agency, Fingerpaint, unveiled a provocative PSA and corresponding marketing campaign aimed at convincing parents to wait to allow their children to play tackle football until age 14. The PSA is part of a larger Fingerpaint-developed campaign, "Tackle Can Wait," which was designed to drive home the message that youth tackle football is incredibly dangerous to the developing brain, and the damage it causes is easily preventable. The pro-bono campaign was an initiative led by two daughters who both lost their fathers to CTE, Rebecca Carpenter and Fingerpaint employee Angela Harrison, and former NFL player Chris Borland. 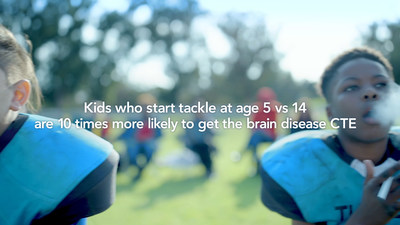 The campaign was created based off the findings of a study published in the Annals of Neurology medical journal on Monday, which was conducted at Boston University in collaboration with the Concussion Legacy Foundation and concluded that the risk and severity of developing chronic traumatic encephalopathy (CTE) increases with the number of years playing tackle football. The study revealed that a child who starts tackle football at age 5, instead of age 14, has an incredible ten times the risk of developing the brain disease CTE.

"The goal of the campaign was to shock the audience into hearing a message they might not want to hear: parents and coaches are allowing kids to take irreversible risks with their brains and need to wait until age 14 to allow kids to play tackle football," said Ed Mitzen, Founder of Fingerpaint. "We look forward to educating and—most likely—challenging the current thinking of moms and dads all over the country as they start to digest what this new data, and our campaign, mean for them, their families, and their communities. The campaign is sure to create conversation, and we are ready for it. You can still be a successful football player and play flag football in youth!"

The agency collaborated across five of its nationwide offices through production, media planning, creative, and development teams to bring the campaign to life.

You can view the full spot and learn more about the behind the scenes of the campaign and study here: www.tacklecanwait.com.

About Fingerpaint: Reset your expectations of a marketing agency. Independent by design, with integrated talent across Saratoga Springs, New York; Conshohocken, Pennsylvania; Phoenix, Arizona; and Cedar Knolls, New Jersey, Fingerpaint is committed to creating and executing meaningful brand experiences that are never paint by number. Fingerpaint was named 2019 Agency of the Year by Med Ad News. It was a 2017 finalist for Agency of the Year by Med Ad News, MM&M, and PM360 and won PR & Marketing Agency of the Year in 2017 from the Business Intelligence Group. Additionally, it won the 2018 Heart Award from Med Ad News for its commitment to philanthropy and social causes and has been on Inc. Magazine's list of the 5,000 Fastest-Growing Companies for the past seven years. Founder Ed Mitzen was honored as 2016's Industry Person of the Year by Med Ad News and as a 2017 Top Boss by Digiday. Visit us at fingerpaint.com and follow us on Facebook, Twitter, LinkedIn, and Instagram.