AKRON, Ohio, Jan. 23, 2019 /PRNewswire/ -- FirstEnergy Solutions Corp. ("FES" or the "Company") today announced that the Company, the official committee of unsecured creditors (the "Committee"), two creditor groups representing a majority in aggregate amount of the Debtors' funded indebtedness and sale-leaseback certificates (the "Ad Hoc Groups"), and a group of creditors holding claims against FES and FirstEnergy Nuclear Operating Co. (the "FES Creditor Group") have reached agreement on the terms of a Restructuring Support Agreement ("RSA") that contemplates the Company's emergence from Chapter 11 protection in 2019 with continued ownership and operation of its retail and wholesale load-serving business. 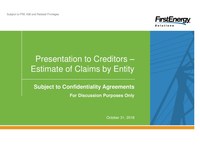 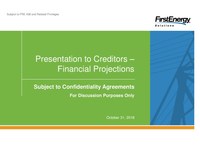 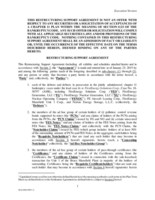 The RSA will enable the Company to emerge as a fully integrated Independent Power Producer focused on maximizing the operating and financial synergies of its retail, nuclear and fossil generating assets. The Company will continue operating its nuclear and fossil generation until their previously announced deactivation dates, with a possibility of running the units for an extended period if the Company obtains sufficient legislative support and meaningful market reforms.  The Company continues to have constructive dialogue with important stakeholders at the state and federal levels for necessary financial support for its baseload assets that are a critical source of reliable and clean power in Ohio and Pennsylvania.  The RSA will form the basis of a Plan of Reorganization which will ultimately be filed with the U.S. Bankruptcy Court for the Northern District of Ohio (the "Bankruptcy Court").

Specifically, the RSA contemplates that unsecured creditors will receive a distribution of newly-issued equity and/or cash based on value allocable to each Debtor and preserves the option for FES (with the consent of the bondholders party to the RSA and in consultation with the Committee) to make cash distributions to unsecured creditors receiving equity in order to optimize the capital structure of FES at emergence from bankruptcy (without increasing the value of recoveries to those creditors). The RSA also contemplates the reinstatement or payment in full of secured pollution control note claims against FirstEnergy Nuclear Generation, LLC and FirstEnergy Generation, LLC.  Finally, the RSA incorporates the implementation of a global plan settlement, including settlements regarding the allowance and treatment of intercompany claims and the allocation of consideration received pursuant to the Settlement Agreement with FirstEnergy Corp. dated as of August 26, 2018 and approved by the Bankruptcy Court on September 26, 2018.

"This is an important step in ensuring the value of the FES estate is maximized for the benefit of all of our stakeholders," said Donald Schneider, President of FirstEnergy Solutions. "It is important to note that nothing in this agreement provides for the Company to continue operating its fossil or nuclear generation assets beyond their currently contemplated deactivation dates.  Without legislative support and market reforms operating beyond those dates will be a significant challenge.  We remain optimistic that such support may be forthcoming, will solidify the tax base and tremendous economic value these plants provide to the surrounding communities in Ohio and Pennsylvania."

The RSA sets out certain milestones for completing the FES restructuring including filing the Plan of Reorganization and the Disclosure Statement by February 8, 2019. The agreement calls for a Bankruptcy Court order approving the Disclosure Statement by March 21, 2019 and a Confirmation order by May 10, 2019.  The initial milestone for the effective date of the Plan of Reorganization that allows the Company to emerge from Chapter 11 is September 15, 2019 which date shall automatically extend to October 31, 2019 in the event that the only remaining conditions precedent to the Plan Effective Date are regulatory approvals.

The Company and its supporting parties are committed to investing in a best-in-class retail supply business that will have the financial resources to provide a compelling suite of solutions for its retail and wholesale customers.  This will provide the opportunity for job creation in Ohio and for existing employees to leverage their strong customer relationships and commercial experience to regenerate the business back to its industry leading position. As a result, the Company has determined to terminate the agreement with respect to the proposed sale of its retail and wholesale load-serving business to Constellation, and will retain ownership of this business going forward. The termination of the retail sale will not affect service to existing FES customers.  The Company expects that the transactions contemplated in the Plan will not impact the collateral it has posted to support its business operations.

The transactions contemplated by the Restructuring Support Agreement are subject to a variety of conditions, including the negotiation and execution of definitive documents evidencing and related to the proposed restructuring, approval of a disclosure statement in respect of the Plan pursuant to section 1125 of the Bankruptcy Code, entry of an order of the Bankruptcy Court confirming the Plan and the satisfaction of other conditions to the effectiveness of the Plan, including all regulatory approvals.

FES looks forward to completing its restructuring in the next year to become a privately held company headquartered in Akron, Ohio focused on job creation, asset and customer growth opportunities for the future.

FES previously executed confidentiality agreements with certain holders or beneficial holders (collectively, the "Creditors") of claims or purported claims against FES, five of FES' wholly-owned subsidiaries (FirstEnergy Generation, LLC, FirstEnergy Nuclear Generation, LLC, FE Aircraft Leasing Corp., Norton Energy Storage L.L.C. and FirstEnergy Generation Mansfield Unit 1 Corp.) and FirstEnergy Nuclear Operating Company (collectively, the "Debtor Entities"). These confidentiality agreements facilitated discussions between FES, the Creditors and the Committee concerning the Debtor Entities' businesses, potential strategic alternatives involving the restructuring of the Debtor Entities and the formulation of a potential chapter 11 plan. Pursuant to the confidentiality agreements, FES agreed to disclose publicly after a specified period, and if certain conditions were met, certain confidential information that FES and the other Debtor Entities had provided to the Creditors, the Committee and their respective advisors. The information included in this press release (collectively, the "Disclosed Information") is being disclosed to satisfy FES' public disclosure obligations under the confidentiality agreements.  Accordingly, attached hereto is a copy of the Restructuring Support Agreement and certain forecasted financial and claims information.

The inclusion of financial forecasts in the Disclosed Information should not be regarded as an indication that the Debtor Entities or any other persons considered, or now consider, such forecasts to be necessarily predictive of actual future results, and does not constitute an admission or representation by any person that such forecasts are material, or that the expectations, beliefs, opinions and assumptions that underlie such forecasts remain the same as of the date of this press release, and readers are cautioned not to place undue reliance on any prospective financial information included in the Disclosed Information.

Neither the independent auditor of the Debtor Entities, nor any other independent accountant has examined, compiled, or performed any procedures with respect to the prospective financial information included in the Disclosed Information and, accordingly, none has expressed any opinion or any other form of assurance on such prospective financial information or its achievability and none assumes any responsibility with respect thereto.

The prospective financial information included in the Disclosed Information:

The Debtor Entities cannot provide assurance that any financial projections included in the Disclosed Information will be realized; rather, actual future financial results may vary materially from such forward-looking information.

Debtors' Estimate of Claims by Entity

The inclusion of an estimate of claims by legal entity in the Disclosed Information should not be regarded as an indication that the Debtor Entities or any other persons considered, or now consider, such estimates necessarily predictive of actual allowed claims and readers are cautioned not to place undue reliance on the claims estimate included in the Disclosed Information.  The claims estimate excludes certain claims, including claims for funded debt, sale leaseback claims, and tax indemnity claims, and cure amounts for executory contracts and unexpired leases.