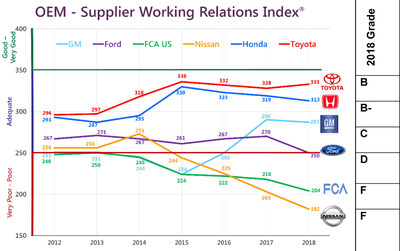 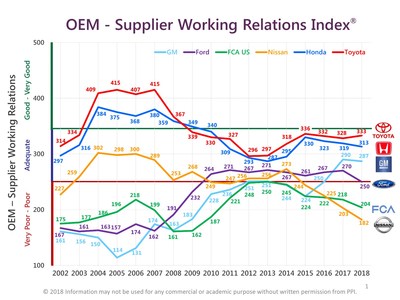 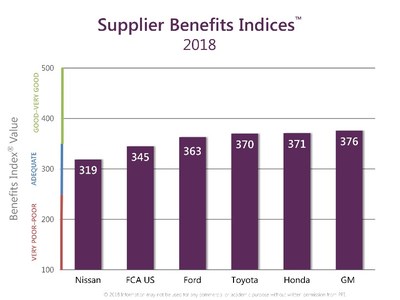 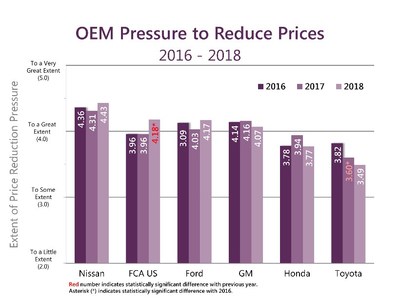 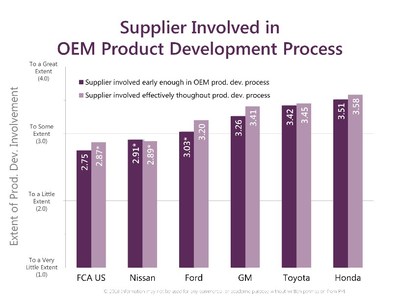 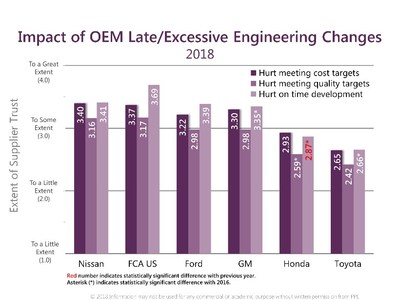 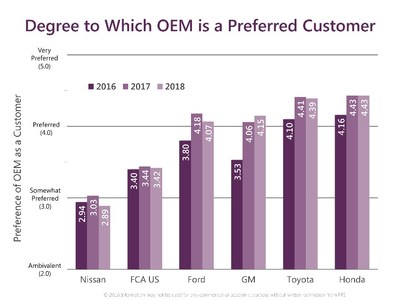 The annual study shows Nissan in last place, continuing its dramatic four-year slide to its all-time low in supplier relations since the study began in 2002. That's significantly below FCA US in fifth place which also continued its downward slide to its lowest ranking in eight years. Ford, after eight years of mixed results, fell to the borderline of Poor relations, its lowest point in nine years.

General Motors, after a two-year dramatic improvement that enabled it to overtake Ford for third place, fell slightly this year. Honda continued its gradual three-year decline. Only Toyota ticked upward slightly after declining for two years, holding onto first-place and continuing to distance itself from second-place Honda.

"The erratic up-and-down year-over-year trend lines suggest that these automakers either don't have a comprehensive supplier relations program in place, or their programs are poorly executed, and it's costing them hundreds of millions of dollars because suppliers contribute about 60 percent to an automaker's gross profits," said John Henke, president of Planning Perspectives. "A well-managed supplier relations program directly impacts the automakers' profits.

"For example, our economic model shows that if GM simply maintained its 2017 ranking rather than dropping 3 points this year, it would have realized an additional $167 for every light vehicle manufactured and sold in N.A. This isn't a lot of money, except that GM manufactured and sold more than 2.4 million light vehicles in N.A. which amounts to more than $400 million in profit. Likewise, had Ford maintained its 2017 level, it would have gained even more -- $600 million in profit."

Cost, of course, is important to an OEM, and Henke's research shows the better the relations with an OEM customer, the greater the price concessions the supplier gives to them. More importantly, the OEM also receives greater non-price benefits such as increased investment in new technology by the supplier, more sharing of new technology, 'A' Team supplier support, and more and better supplier communication that can help avoid and resolve problems more quickly.

Supplier relations are not that difficult to understand, says Henke. "Like any relationship, supplier relations come down to how well you communicate, how fair and respectful you are to the other party, and being trustworthy, which includes doing what you say you will do. The real challenge comes in executing and managing the complexities of the program."

Following are more highlights from the study that show management and buyer actions and their consequences, both positive and negative:

"Based on the results of the study, it would seem the automakers have forgotten the value and financial impact of strong, positive, collaborative supplier relations," said Henke.  "If this was clearly understood, there is no question the OEMs' top management and boards of directors would be much more focused on supplier relations improvement.

"Poor supplier relations mean significant reductions in suppliers' contribution to OEM profits, and with the uncertain future facing automakers in terms of technology, market dynamics, and increasing global competition, each OEM is going to need all the revenue and profits it can generate."

About the Study.  Now in its 18th year, the Annual North American Automotive OEM-Tier 1 Supplier Working Relations Index® Study was conducted from early March to mid-April. Respondents are 684 sales persons from 496 Tier-1 suppliers, representing 62% of the six OEMs' annual buy, participated in the Study.  The sales personnel provided data on 2,024 buying situations (e.g., supplying brake systems to FCA US, tires to Toyota, seats to GM).  Demographically, the supplier-respondents represent 44 of the Top 50 NA suppliers and 77 of the Top 100 NA suppliers.

The annual study tracks supplier perceptions of working relations with their automaker customers in which they rate the US and Japanese automakers across the six major purchasing areas broken down into 14 commodity areas.  The results of the study are used to calculate the WRI® which can then be used to calculate the economic value of working relations based on a proprietary PPI-developed economic model.  The economic model is based on the suppliers' price and non-price contributions to the automakers' profits. WardsAuto provided data on the automakers N.A. annual light vehicle production and sales for use in the model. For more information, visit PPI at www.ppi1.com or phone +1.248.644.7690.