IRVINE, Calif., March 15, 2017 /PRNewswire/ -- Before an overflow crowd of music fans, the Irvine City Council tonight unanimously approved a plan between FivePoint and Live Nation Entertainment to build and operate an interim outdoor amphitheater next to the Orange County Great Park to replace the beloved Irvine Meadows Amphitheater, which closed last fall after entertaining music fans for 35 years. 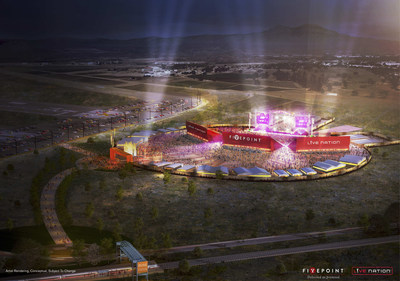 "The Irvine City Council is continuing a tradition that has brought hundreds of thousands of people together for more than three decades in our city," said Mayor Donald P. Wagner. "In doing so, we recognize the enormous economic engine that live music fuels in Irvine and beyond, and the cultural importance of live music as part of Orange County's identity. FivePoint and Live Nation's proposal enables us to collectively develop recreational, cultural and educational opportunities for the enjoyment of Orange County residents and visitors."

Music fans and community stakeholders, many wearing red "Save Live Music Irvine" t-shirts, filled the council chambers with the overflow crowd watching on closed circuit TVs elsewhere in City Hall. Speakers from all segments of the community, including business, labor, education and the performing arts, as well as several longtime Irvine Meadows season ticket holders, asked the council to approve the plan for the interim venue and accelerate action on a permanent amphitheater on city-owned land in the Great Park.

When the council voted 5-0 to approve the proposal, the crowd inside the chambers erupted in applause and cheers.

"This is a win for all live music lovers and especially the nearly 35,000 fans who offered their voices to the Save Live Music Irvine initiative," said Emile Haddad, Chairman and CEO of FivePoint. "The cornerstone of how we build communities is connectivity. We believe what makes communities great is diversity and inclusivity. I don't believe there is a better place to find that than a live music venue and that's why this decision is important. We're excited because when you add music to sports, education, jobs and housing you enhance the experience for everyone and that's how a community is built.

"I only hope that soon we will be celebrating the approval of the permanent amphitheater at the Great Park to insure live music in Irvine continues for many generations to come," Haddad said.

"We couldn't be happier to continue to be part of the unique culture of live music in Irvine," said Gallagher. "We are excited to partner with FivePoint, a company that embodies the spirit of California living, to build and operate what will be a high-quality event venue with spectacular views of the Santa Ana Mountains as well as outstanding conveniences and amenities that cater to music fans of all ages."

In October 2016, the Irvine Meadows Amphitheatre staged its final concert after hosting thousands of music's biggest artists and bands before the iconic venue closed after more than 35-plus years. FivePoint and Live Nation then announced a proposal to build and operate an interim outdoor venue at the former Marine Corps Air Station El Toro base. Under the approved plan, Live Nation will lease the concert venue site at the end of the remaining runways next to the Great Park.

The site of the new interim venue is less than 2 miles from the now-removed Irvine Meadows. In addition, the interim facility is within walking distance of the Irvine Transportation Center, a major mass transit hub for Metrolink passengers. By teaming up with Live Nation Entertainment, the longtime producer of the summer concert series at Irvine Meadows, FivePoint has taken an important step to ensure that live outdoor music will continue in Irvine. A specific date for opening the interim venue has not been announced, but if all goes according to plans Live Nation hopes to stage its first concert in the new location sometime later this summer.

Live Nation offers more than 80 festivals worldwide in its portfolio, including mega events such as Austin City Limits, Bonnaroo and Lollapalooza. The live music promoter also manages 196 venues in 11 countries. The new Irvine amphitheater will be based on the America's Cup Pavilion in San Francisco, a waterfront concept introduced in 2013 at the international sailing competition. Live Nation has committed to building 12,000 seats, 4,000 parking spots as well as concession and hospitality offerings ready in time for fans to take in concerts this summer.

This interim venue has been championed by fans, city officials and area business leaders, including the Save Live Music Irvine movement, which represents nearly 35,000 fans. Organizers formed Save Live Music Irvine in August 2016 to bring attention to Irvine Meadows closing and build momentum for a new venue in Irvine. At a news conference held in October 2016, Save Live Music Irvine joined FivePoint and Live Nation to express their desire to see Irvine's 35-year tradition of hosting live music events continue. Outside of the city council chambers Tuesday evening, several hundred supporters wearing the red Save Live Music Irvine t-shirts rallied before entering City Hall for the hearing.

ABOUT FIVEPOINTFive Point Communities Management, Inc. is the development manager for Heritage Fields El Toro, LLC, the owner of the private development adjacent to the Orange County Great Park, commonly known as Great Park Neighborhoods. Five Point Communities Management, Inc. is a subsidiary of Five Point Holdings, LLC. Spanning the state from Southern California to the San Francisco Bay Area, FivePoint is the largest owner and developer of mixed-use, master planned communities in coastal California based on the total number of residential home sites permitted under existing entitled zoning. FivePoint, based in Aliso Viejo, has major real estate holdings and developments in three of the most dynamic and supply-constrained markets along the California coast: Orange County, Los Angeles County and San Francisco County. For additional information, visit www.fivepoint.com.