LAS VEGAS, Aug. 26, 2017 /PRNewswire/ -- Floyd Mayweather showed his true colours last night, as he sported a pair of lucky pants provided by Paddy Power at the weigh-in for his fight against Conor McGregor.

The custom-made pants cost almost £3,000, and were designed by Mayweather himself – including the line 'always bet on black' stitched into them. 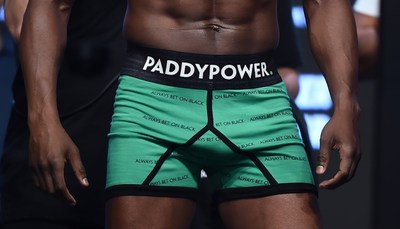 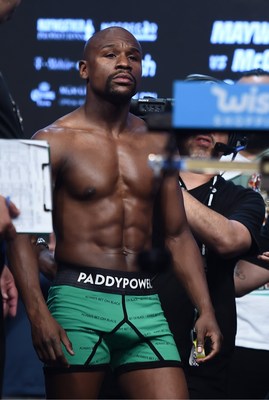 The Paddy Power lucky pants were first made famous when footballer Nicklas Bendtner revealed a pair after scoring at Euro 2012 for Denmark.

And, last night, they were the American's final pre-fight jab at McGregor, whose compatriots Paddy Power surprisingly teamed up with Mayweather to hijack the weigh-in ahead of a fight they say will attract more than £200million in bets.

The bookmaker have taken FOUR times as many bets on McGregor than Mayweather in the last 24 hours, and say that more than 80% of bets overall have been for the Irishman.

That includes one bettor who staked £650,000 on a McGregor victory at 10/3 – which would return winnings of more than £2.8million.

And that's not the only reason Paddy Power fear their compatriot – a fourth round stoppage, as 'Mystic Mac' has predicted, would cost them more than £10million.

Such is the interest in the bout, it is easily Paddy Power's biggest boxing betting market of all time, and their biggest sporting event of the year.

But the bookie is confident – on Wednesday, they paid out early on a Floyd Mayweather victory, including one punter who received more than £50,000 in winnings.

Even Mayweather himself noted the pay-out, posting a celebratory video on his social channels – never one to miss a chance to goad his opponent.

Spokesman Paddy Power said: "Floyd showed his undies-card, and a certain Mr Power was on the bill.

"We've put the Money where our mouth is, and he's put us where…well, you get the picture.

"There's no doubt about it, this is the biggest fight in history – at least in terms of betting.

"From our perspective, despite always wanting the Irishman to do well in major sporting events, we think a Mayweather victory is inevitable, and paid out – because we checked, and only one of them is a boxer."

Our full Mayweather vs McGregor markets are available here: http://www.paddypower.com/bet/boxing/boxing-matches/Floyd-Mayweather-Jr-v-Conor-McGregor-12418948.html