MORGANTON, N.C., June 3, 2021 /PRNewswire/ -- While most young women are getting fitted for prom dresses this time of year, 16-year-old Gray Leadbetter is screaming sideways down a dirt track at 100+ mph in a Sprint Car. "Adrenaline, it's pure adrenaline," says Leadbetter. "It's just one of the best feelings there is." 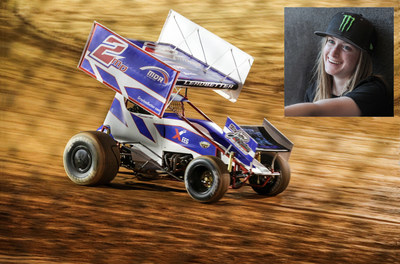 Her enthusiasm is understandable considering the raw performance of her IMCA 305 RaceSaver Sprint Car. With a 500 horsepower V8 and a race-weight of just 1500 pounds, it has more power than a Corvette and is 1800 pounds lighter. It's the closest you can get to just strapping yourself to an engine.

The opportunity to move into Sprint Cars came from Marc Dailey, owner of Factor 1 East and Marc Dailey Racing. He had been working with Leadbetter for eight months in Micro-Sprints, smaller versions of a Sprint Car. When she told Dailey, an accomplished driver himself, that she wanted to try Sprint Cars, his response was, "Oh man, now we're talking my language!"

Despite his confidence in Leadbetter, he admitted he was willing to give her a shot, but he had no expectations. Sprint Cars are the wild beasts of the motorsports world.

Dailey wasn't surprised that she did well, he was surprised that she got up to speed so quickly. "She jumped in like she had already run 10 or 15 races," said Dailey. Her performance was all the more impressive after Dailey discovered that she had been driving all night with a faulty power steering unit. "Man, I would have put that car on the trailer after five laps," said Dailey. "I called her dad and said, Steve, your kid is way tougher than I gave her credit for."

While most young racers dream of careers in NASCAR, Indycar or Formula 1, Leadbetter prefers racing on dirt. "She wants to run Pro4 Trucks and Sprint Cars," said Dailey. "She absolutely can and I think she can do it at the top level. She'll be as good as, not just any female, but any driver who wants to do it."

The prom will have to wait.