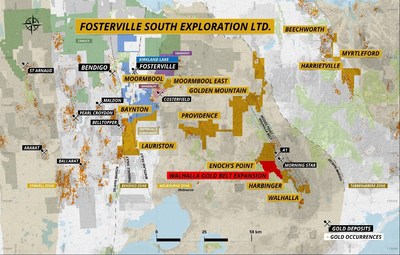 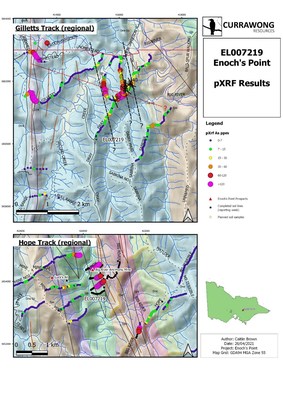 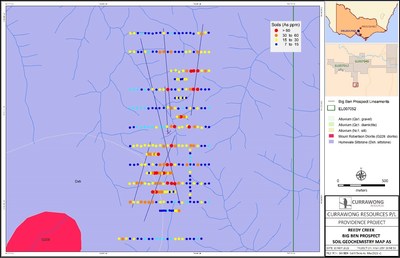 Big River Sb Prospect to Hope Track.  The Big River Sb Prospect is hosted by Siluro-Devonian folded and faulted sediments and occurs in close proximity to the Jerusalem Inlet Fault, which is part of the Enoch's Point Thrust Fault Zone. This fault zone extends for tens of kilometers north to south across the entire state of Victoria. A soil program was conducted at the Big River Antimony Mine, which has outlined an area of As-Sb pXRF soil anomalism covering strike length of 1km by 600m width and possibly extending 1.6km south to the Hope Track arsenic anomalous traverse, as well as north to another ridge traverse making an overall strike extent of 3.2km and up to 600m wide.  Mineralisation is therefore open along strike in both north and south directions beyond these two remote traverses. Fosterville South is exploring the intervening ground currently to establish mineralisation continuity. Gold assays for these soil samples are pending.

Wild Dog Ring Dyke.  The Wild Dog Ring Dyke consists of granite and almandine-bearing granodiorite porphyry. This porphyry contains antimony-gold in sheeted quartz chlorite and carbonate veins, with sericite alteration haloes. Within the Enoch's Point licence, the dyke extends for 23km and is variably Au-As-Sb mineralised for its entire length. BHP drilled two holes in the south in 1985 and CRAE drilled two holes in the central part in 1994. All holes are less than 136m depth. Previous explorers soil sampling traverses indicate numerous gold mineralised prospects occur which require follow up in this very prospective structure.

The Reedy Creek goldfield forms part of the Providence Project in the Melbourne Zone of Central Victoria west of the Walhalla Gold Belt. The goldfield is hosted by the Silurian Dargile Formation of siltstone and sandstone set in a northwest striking doubly plunging anticlinal dome. This geological setting is similar to the Costerfield dome which is being mined by Mandalay Resources and is currently one of the highest-grade gold mines in the world. The Reedy Creek goldfield is well known for its high-grade historic gold production. This goldfield that has never been previously explored or drilled by modern techniques. Soil sampling has generated various areas of mineralisation and exploration is ongoing, both as infill sampling and in the neighbouring landowner properties. The latest sampling program has identified two extensive As-Sb epizonal anomalies:

Prince of Wales Reef.  A north-northwest striking pXRF arsenic anomalous trend is present and associated with the 600m long Prince of Wales reef, which was worked by several gold mining companies in the late 1800s. Further east there is a parallel arsenic trend that shows quartz veining.  This secondary area of potential mineralization has had no historical mining. The soil geochemical anomalies are open along strike in both directions and landowner access is being or has been secured. Historic gold workings extend for a further 2.5km southeast of the soil grid and 3km northwest of the soil grid on various mined structures within the overall corridor.

Big Ben Prospect.  The Big Ben prospect area is hosted by Devonian Humevale Siltstone and occurs partly within the contact metamorphic aureole of the Mount Robertson granodiorite intrusion. Various Au-As mineralised structures occur within the prospect including those associated with the Harry's Dyke and Big Ben gold workings. The main continuous Au-As anomaly lies in the southwest of the grid and is at least 600m in strike length and up to 120m wide. Soil sampling has covered an area of 2000m by 800m and soil sampling is ongoing. Further gold assay results are pending for the newly acquired soil samples.

Rex Motton states "These extensive As-Sb epizonal soil anomalies contain significant strike length and may indicate various robust gold systems through a number of our properties.  Each of Enoch's Point and Reedy Creek are high-priority target areas for future drilling by FSX".

Fosterville South is very active in its exploration of a host of its highest value targets in the largest prospective package in Victoria and has now moved into an expanded operations headquarters in Bendigo, Australia. Expanded field teams, drill rigs and geologists are accelerating the activity throughout the tenements. With in excess of $25 million in cash on hand, Fosterville South is in excellent shape to continue this ramp up and expects to report consistent news flow on its activities.

In addition to regional fieldwork, such as described in today's News Release, the company has ongoing active exploration programs, including drilling at the Lauriston, Moormbool and Golden Mountain projects.

All portable XRF arsenic and antimony assays of the collected soil samples are conducted by Currawong Resources staff, which includes regular duplicates, blanks and supplied instrument standards with the expected results from the samples submitted. The quality control results are consistent. Sampling has been done in several campaigns and follow up results have been supportive of previous results.

The gold assays were subject to quality control measures appropriate for reconnaissance rock chip sampling with duplicates, blanks and commercially available standards with the expected results from the samples submitted. All assays were conducted by Onsite Laboratory Services Ltd (ISO: 9001), located in Bendigo, Victoria, using fire assay techniques with a 50g charge and AAS finish. The quality control results are consistent.

Fosterville South began with two, 100% owned, high-grade gold projects called the Lauriston and Golden Mountain Projects, and has since acquired a large area of granted and application tenements containing further epizonal (low-temperature) high-grade gold mineralisation called the Providence Project and a large group of recently consolidated license tenement applications called the Walhalla Belt Project, which contain a variety of epizonal and intrusion related style gold mineralisation, all in the state of Victoria, Australia. The Fosterville South land package, assembled over a multi-year period, notably includes a 600 sq. km property immediately to the south of and within the same geological framework that hosts Kirkland Lake Gold's Fosterville epizonal gold tenements. Additionally, Fosterville South has gold-focused projects called the Moormbool and Beechworth, which are also located in the state of Victoria, Australia. Moormbool project has epizonal style gold mineralisation and Beechworth has mesozonal and intrusion relation gold mineralisation.

All of Fosterville South's properties, with the possible exception of Moormbool, have had historical gold production from hard rock sources despite limited modern exploration and drilling.

The technical content of this news release has been reviewed, verified and approved by Rex Motton, AusIMM (CP), COO and Director of Fosterville South, a qualified person as defined by NI 43-101.  Historical records were verified by reviewing annual and quarterly reports from government records by the Qualified Person.

On behalf of the CompanyRex MottonChief Operating Officer and Director

Information set forth in this news release contains forward-looking statements that are based on assumptions as of the date of this news release. These statements reflect management's current estimates, beliefs, intentions and expectations. They are not guarantees of future performance. Fosterville South cautions that all forward looking statements are inherently uncertain and that actual performance may be affected by many material factors, many of which are beyond their respective control. Such factors include, among other things: risks and uncertainties relating to Fosterville South's limited operating history, its exploration and development activities on is Lauriston and Golden Mountain Properties and the need to comply with environmental and governmental regulations.  Accordingly, actual and future events, conditions and results may differ materially from the estimates, beliefs, intentions and expectations expressed or implied in the forward-looking information. Except as required under applicable securities legislation, Fosterville South does not undertake to publicly update or revise forward-looking information.

Neither TSX Venture Exchange nor its Regulation Services Provider (as that term is defined in the policies of the Exchange) accepts responsibility for the adequacy or accuracy of this release.