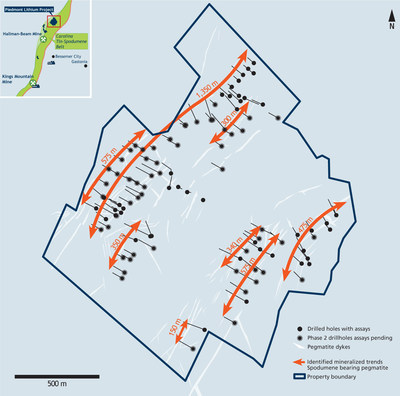 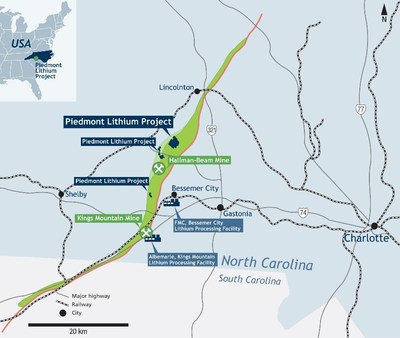 Keith D. Phillips, President and Chief Executive Officer, said, "These initial Phase 2 results are highly encouraging.  We continue to be surprised by the sheer extent of the mineralisation and are excited to begin testing the deposit at depth.  The Project is clearly larger than we had first envisioned and it is important that we do the work to properly evaluate the scale of the resource.  Our Phase 1 drill program identified four potential corridors of mineralization and our Phase 2 program has in fact defined abundant high-grade mineralization in each corridor. We look forward to releasing the remaining results of our Phase 2 drilling campaign over the coming weeks."

"We have established relationships with the leading technical and marketing consultants in the Lithium sector and intend to accelerate our feasibility studies with regards to metallurgical, mine development and off-take plans in the near future."

Piedmont Lithium Limited ("Piedmont" or "Company") is pleased to advise that approximately 4 kilometers of total strike length over eight (8) spodumene bearing mineralized trends have been identified within the Piedmont Lithium Project ("Project") with all pegmatite trends remaining open along strike and down dip.

The initial 9,400 meter drilling which was planned for the Phase 2 campaign is now complete and was finished on-time and under-budget. Due to the success of this campaign, the Company has decided to continue the Phase 2 drilling program for a further 3,000 meters which will test the known mineralisation both along strike and importantly down dip.

The initial assay results for the first 26 holes of the Phase 2 campaign have been received and continue to show high grade mineralisation across significant, mineable widths.  Drill hole details and weighted-composite assay intercepts are attached as Appendix 1. The Company is extremely encouraged by the visual observations of mineralisation in the outstanding holes and expects to receive additional assays over the coming weeks.

The first Phase 2 drill holes were focused on the B, F and G corridors identified from the Phase 1 campaign.  The cross-section below illustrates significant results from the G Corridor to date, from the Phase 2 Campaign.

High grade results from the B Corridor included:

Following the Company's enhanced understanding of the high-grade mineralization potential at the Project, Piedmont, in consultation with our technical consultants who are leaders in the lithium sector, has opted for an increased and wider spaced Phase 2 drilling program.

The Company has now completed the 9,400 meters which was initially budgeted for the Phase 2 campaign and due to the extremely encouraging results, the Company will extend the Phase 2 drilling campaign for a further 3,000m to further test the mineralisation along strike (in the Star Corridor) and down dip (in the B and G Corridor).

Systematic 40 to 80 meter "step-outs" during the Phase 2 drill program have allowed Piedmont to identify eight (8) significant spodumene bearing pegmatites dikes or dike swarms totalling approximately 4 kilometers in strike length.  These eight pegmatite trends consist of one to multiple spodumene bearing dikes with drill thickness ranging up to 16 meters. In general, the Phase 2 drilling has only tested the pegmatites to a vertical depth of 100 meters. A key focus of the additional 3,000 meter Phase 2 drilling extensions will go towards testing the downdip extensions in the "B" and "G" corridors while continuing to test along strike in the Star corridor. Note that several other highly prospective areas within the Project remain untested.

Given the scale of the mineralization on the property and the additional drilling required to test the potential, the Company now intends to release an Exploration Target in December 2017 followed by a maiden Mineral Resource estimate in early-2018.

Piedmont Lithium Ltd (ASX: PLL) holds a 100% interest in the Piedmont Lithium Project (the "Project") which is located within the world-class Carolina Tin-Spodumene Belt ("TSB"), and along trend to the Hallman Beam and Kings Mountain mines, historically providing most of the western world's lithium from the 1950s to the 1990s. The TSB is one of the premier localities in the world to be exploring for lithium pegmatites given its history of lithium bearing spodumene mining, favourable geology and ideal location with easy access to infrastructure, power, R&D centres for lithium and battery storage, major high-tech population centres and downstream lithium processing facilities.

The TSB has previously been described as one of the largest lithium provinces in the world and is located approximately 40 kilometers west of Charlotte, North Carolina, United States. The TSB was the most important lithium producing region in the western world prior to the establishment of the brine operations in Chile in the late 1990's. The TSB extends over approximately 60 kilometers in length and reaches a maximum width of approximately 1.6 kilometers.

Four Kilometers of Mineralization Confirmed at the Piedmont Lithium Project