NUR-SULTAN, Kazakhstan, Dec. 11, 2019 /PRNewswire/ -- The show was organized by the Ministry of Culture and Sports of Kazakhstan as part of the Days of Kazakhstan's Culture in the US.

The tickets sold out in a matter of days and the arena was merely packed. The singer's fans from 54 countries and 41 US states looked forward to seeing their idol. Many of them met Dimash upon his arrival in the New York's JFK. 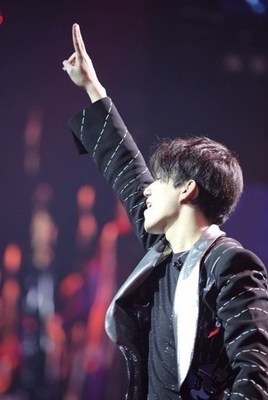 "The Ministry of Culture and Sports actively supports Kazakhstani young talents, and Dimash is one of the great examples of that. It seems fair to say we are witnessing the rising of a new world star – Dimash Qudaibergen – the first Kazakh performer to win the whole world," -- noted Mr. Yeldos Ramazanov, Kazakhstan's Vice Minister of Culture and Sports.

The Arnau Tour ENVOY is the result of work by a huge team of professionals – directors, choreographers, arrangers, dancers, musicians, videographers, operators, etc. -- who employed new conceptual solutions and techniques in artistic design, choreography, visual effects and, of course, sound.

"Thank you for your support! I love you! This is my first concert in New York!" – said Dimash starting his dialogue with the audience after performing the first compositions and getting an incredible feedback. According to Dimash, performing on the big stage and acquainting the world with the Kazakh culture was his childhood dream, and today it came true in New York!

Dimash's performance of The Olimpico caused a real furor! The spectators listened to every song's note holding their breath.

The iconic S.O.S. cannot but touch the human heart. In the course of the performance, the screen in the back of the stage showed pictures of the passed away famous artists: Batyrkhan Shukenov, Bruce Lee, Kurt Cobain, Amy Winehouse and others. With the song, the singer wanted to remind the world of the people whose creative talent will live forever.

The Love of Tired Swans broke absolutely all records of group performance! The spectators were humming the song long after its end. The evening's repertoire included hits like The Love of Tired Swans, SOS d'un terrien en détresse, Daididau and consisted of songs in Kazakh, English, Russian and Chinese.

The show's choreographic elements were performed by the DQ Dance Pro and Astana Ballet dancers. Every act was thought through to the smallest detail. Decorations, costumes and visual effects created a holistic impression and made the audience feel the music even deeper.  Thus, Dimash Qudaibergen accomplished the key concert's mission and became the genuine envoy of the Kazakh culture!

Dimash Qudaibergen is a vocalist, composer, and multi-instrumentalist from Kazakhstan. The six-octave singing sensation has captivated music lovers from around the world with his ability to conquer both bass and falsetto registers. Possessing the vocal style of a lyrical tenor, Dimash excels in the Belcanto technique, revealing his full range. The Ministry of Culture and Sports of the Republic of Kazakhstan