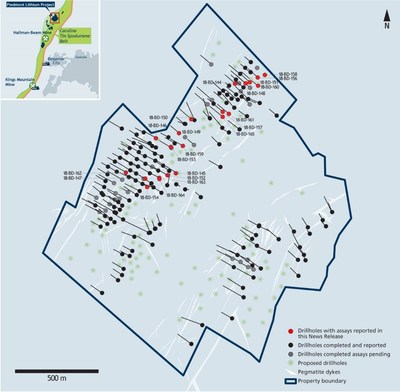 Piedmont Lithium Limited ("Piedmont" or "Company") is pleased to advise that the Company has received assay results from a further 21 holes from the current 20,000 meter drilling campaign on its properties in the Carolina Tin-Spodumene Belt ("TSB") in North Carolina, United States. The Company remains on schedule to release a maiden Mineral Resource estimate in accordance with the JORC Code by the end of the 2nd Quarter 2018.

The results build upon the previous drilling completed on the property and continue to show similar high-grade mineralisation and pegmatite intercepts. The Company has six drill rigs on site and has completed 76 holes totalling just over 13,000 meters of its planned 20,000-meter Phase 3 program. Infill drilling is expected to be completed within the next few weeks and upon completion the Company will move to drilling high priority targets to assist in delineating further potential resources.

Piedmont Lithium Limited (ASX: PLL; OTC-Nasdaq Intl: PLLLY) holds a 100% interest in the Piedmont Lithium Project ("Project") located within the world-class Carolina Tin-Spodumene Belt ("TSB") and along trend to the Hallman Beam and Kings Mountain mines, historically providing most of the western world's lithium between the 1950s and the 1990s.  The TSB has been described as one of the largest lithium provinces in the world and is located approximately 25 miles west of Charlotte, North Carolina.  It is a premier location to be developing and integrated lithium business based on its favourable geology, proven metallurgy and easy access to infrastructure, power, R&D centres for lithium and battery storage, major high-tech population centres and downstream lithium processing facilities.

The Project was originally explored by Lithium Corporation of America which eventually was acquired by FMC Corporation ("FMC"). FMC and Albemarle Corporation ("Albemarle") both historically mined the lithium bearing spodumene pegmatites within the TSB and developed and continue to operate the two world-class lithium processing facilities in the region which were the first modern spodumene processing facilities in the western world. The Company is in a unique position to leverage its position as a first mover in restarting exploration in this historic lithium producing region with the aim of developing a strategic, U.S. domestic source of lithium to supply the increasing electric vehicle and battery storage markets.

Piedmont, through its 100% owned U.S. subsidiary, Piedmont Lithium Inc., has entered into exclusive option agreements and land acquisition agreements with local landowners, which upon exercise, allow the Company to purchase (or in some cases long-term lease) approximately 1,200 acres of surface property and the associated mineral rights.

The information in this announcement that relates to Exploration Results is based on, and fairly represents, information compiled or reviewed by Mr. Lamont Leatherman, a Competent Person who is a Registered Member of the 'Society for Mining, Metallurgy and Exploration', a 'Recognized Professional Organization' (RPO). Mr. Leatherman is a consultant to the Company. Mr. Leatherman has sufficient experience that is relevant to the style of mineralization and type of deposit under consideration and to the activity being undertaken to qualify as a Competent Person as defined in the 2012 Edition of the 'Australasian Code for Reporting of Exploration Results, Mineral Resources and Ore Reserves'. Mr. Leatherman consents to the inclusion in the report of the matters based on his information in the form and context in which it appears.