NEW YORK, Jan. 18, 2019 /PRNewswire/ -- A new survey conducted by OnePoll, on behalf of Garnier Fructis, revealed that if women had extra time in their day, 49 percent would use it to sleep, while others would read (36 percent) or exercise (29 percent).* The survey, which delves into the routines and schedules of 2,000 American women aged 18 and older, pinpointed the hectic juggling act many women face in managing work, families and running errands, on top of seeing friends and life in general. 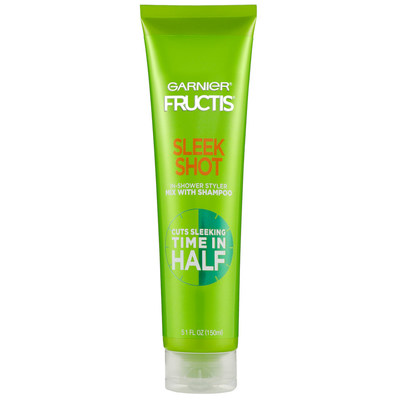 The Garnier Fructis study, revealing that the average woman feels she needs an extra 82 minutes a day to accomplish everything she would like, heralds the launch of a new innovative, time-saving in-shower hair styler, Sleek Shot. Sleek Shot is an in-shower hair styler that works by mixing with your shampoo (1:1 ratio), so that the in-shower hair smoothing and sleeking technology, infused with Argan Oil, coats hair strands with a flexible, hydrophobic polymer to jumpstart the blow dry routine. Users then rinse, follow with conditioner and blow dry as usual with no need for a flat iron or additional styling. The product will leave hair five-times smoother (with the Garnier shampoo, Sleek Shot, conditioner system vs. non-conditioning shampoo). The product was developed and tested specifically for women who spend hours trying to achieve the perfect blow out. Now with Sleek Shot, it takes half the time to sleek her hair.

"As a hairstylist, I hear countless women tell me they wish they could cut down on the time spent doing their own hair. They all wish they could get more time back for themselves," said Garnier Fructis Hair Consulting Stylist Ashley Streicher. "A time-saving product, like Garnier Fructis' new Sleek Shot in-shower styler, is becoming a total lifesaver for my clients with hectic lives. And they're obsessed – by adding it to their shower routine, they're tossing out their flatirons and finding that their perfect sleek hair no longer requires tons of extra time, steps or products to achieve a super polished look."

The survey further revealed that receiving this extra time back is of the essence for today's modern woman. One in three women are so busy, they'd be willing to give up social media and watching TV in order to have a bit of extra time back in their day; one in ten say they'd even give up their significant other for more time.*

With more time saved that was previously spent on their hair care routines, women can reconnect to their own personal priorities. Half of respondents reported that they have given up a hobby, simply because they didn't have the time for it. Twenty-two percent of women would use their extra time to learn a new hobby. Women report wanting to learn how to knit, write poetry and learn photography as some of the most lusted after activities.*

About GarnierGarnier, a L'Oréal USA brand, was developed in 1904 in France by hair care expert Alfred Amour Garnier and is now present in more than 65 countries worldwide. Following the launch of Garnier in the United States in 1999 with Nutrisse hair color, the brand has continued to develop beauty products with a keen awareness of its responsibility to you and the planet. The entire collection of Garnier brands available in the U.S. includes Nutrisse, Fructis hair care and Fructis Style, Olia hair color, Color Sensation hair color, SkinActive and Whole Blends hair care. For more information visit www.garnierusa.com or follow us on Instagram, Twitter, Facebook, Pinterest and Snapchat @GarnierUSA.

*According to the SWNS survey conducted by OnePoll to 2,000 women aged 18+