CLEVELAND, Dec. 21, 2019 /PRNewswire/ -- The Googie-style 1967 building that currently operates as Tom's Diner will be saved from demolition and reinvented through a partnership between the current owner and GBX Group. Additionally, the structure has now been officially listed on the National Register of Historic Places. 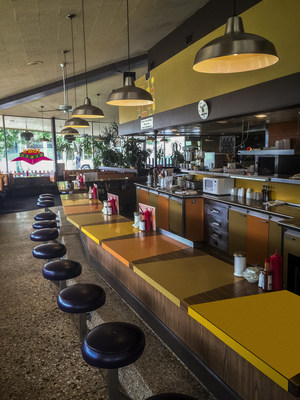 The building was at the center of a local preservation effort over the summer.  In August, community members withdrew a bid requesting local landmark status for the building - citing hoped for win-win alternatives.  Annie Levinsky, Executive Director of Historic Denver, an organization involved in the dialogue, said, "The conversations that were happening locally about the building's future and the owner's rights were challenging, with competing community and economic interests at play."

She continued, "There had to be a solution that benefited everyone and that's when Historic Denver reached out to GBX Group. They were instrumental in protecting the nearby historic George Schleier Mansion, and we knew they could help."

GBX Group Founder and CEO, Drew Sparacia, reacted by saying, "working with historic buildings is our passion and when we learned about Tom's Diner, we took an active interest in finding a balance between economic realities and preserving a historically important property. In addition to our substantial investment, we will utilize various federal and state incentive programs to achieve this balance. These programs include historic tax credits and preservation easement deductions. Additionally, we will improve and modernize the functionality of the property to ensure it is a contributing economic asset to the City of Denver."

Sparacia went on to say that "important historic buildings are being demolished throughout the United States because the current economic real estate climate favors building new. However, there are many government incentive programs available to help bridge the economic gap between building new and preserving the old. Unfortunately, identifying and working with the myriad of programs is quite difficult. That is why the work of local preservation groups like Historic Denver is critical."

Details are being finalized. But what is known is that GBX Group, in line with its business model, intends to do its best to preserve and rehabilitate Tom's Diner so that the building façade and important interior elements will be retained in line with its historic character.

As mentioned earlier, the building has been included on the National Register of Historic Places. The register was created in 1966 and is an honorary designation that acknowledges the structure's significance and creates eligibility for federal and state incentive programs.

GBX Group LLC specializes in acquiring, preserving and operating historic real estate in urban markets. The company partners with investors to fund the purchase and preservation of historic real estate to generate community revitalization and economic growth. Since its founding in 2001, GBX has completed over 100 projects in 18 states. The company recently relocated to its new corporate headquarters in the renovated and award-winning Empire Improvement Building at 2101 Superior Avenue in Cleveland. For more about GBX, visit gbxgroup.com/.

Historic Denver is a local membership-based non-profit organization supported by those who love Denver. For nearly 50 years, Historic Denver has led the way by providing ideas and actions for the places that give Denver its unique identity. Historic Denver owns and operates the Molly Brown House Museum, provides education and technical assistance for owners of historic properties, operates the Denver Story Trek and Discover Denver projects, and actively engages in community dialogue about the vibrancy created through the dynamic mix of old and new. For more about Historic Denver visit historicdenver.org

About the 601 East Colfax Building

Locally known as Tom's Diner, the building is an excellent example of Googie-style architecture. It opened in 1967 in the form of a White Spot Restaurant. Its unusual architecture is an expression of the style that originated with a California coffee shop of that name after World War II and became popular along highways and major thoroughfares throughout the country. The style was viewed as futuristic, displaying features such as cantilevered and tilting roofs, walls, and windows, as well as geometric shapes and acute angles. The style also used expanses of glass, metal, plastic panels, and stone veneers. The architects for this building, Armet & Davis of Los Angeles, were considered the preeminent designers in the Googie style.

The White Spot coffee shop chain started in Colorado in 1947. William F. Clements, who was born in Monte Vista, operated a bakery business that supplied restaurants in downtown Denver before opening his first White Spot in an existing storefront on Broadway. Clements created nine restaurants in the chain and hired Armet & Davis as the firm's architects. The coffee shops were known for their casual atmosphere, convenient parking, attractive prices, fast and friendly service, comfortable seating, and menus with a wide selection of meals. The avenue's White Spot operated until the mid-1980s, and the last representative of the chain closed in 2001. A series of restaurants followed in this building, but none achieved long-term success until Tom's Diner, owned by Thomas S. Messina, began serving food in 1999.