SHANGHAI, Nov. 27, 2018 /PRNewswire/ -- On October 24th, GeekPwn2018, the world's leading hacker contest focusing on securing our digital lifestyles, arrived in style. Thousands of white-hat hackers from around the world gathered at the Grand Stage of the Himalaya Art Center in Shanghai to compete and communicate with each other to develop and explore the safety limits of smart devices and artificial intelligence. At the end of the contest, the GeekPwn organizers announced the final results of the CAAD CTF and CAAD2018 online competitions. 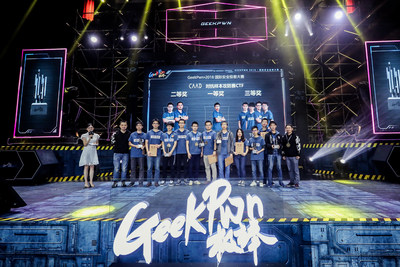 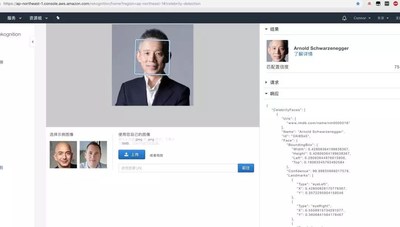 Hailing from Tsinghua University, China's University of Science and Technology, USA's John Hopkins University, Facebook, Tencent, Alibaba, Shanbay as well as six other AI teams from well-known universities and enterprises, the competitors tussled it out on stage for the audience. After two stages of tug-of-war intense battles, the IYSWIM team emerged as GeekPwn 2018's CAAD CTF champion, with OWLET and TSAIL picking up the runner-up and second runner-up prizes respectively. In addition, Blade, USTC-ALIBABA and the RNG team won special mention prizes for their innovative solutions.

The current CAAD CTF champion team IYSWIM consists of two members, one is Mr. Wu Yuxin, who specializes in computer vision research at Facebook AI Research, and Dr. Xie Cihang, who is a Ph.D. student in computer vision at Johns Hopkins University, and is advised by Alan Yuille. At the scene, the adversarial examples they generated successfully deceived Amazon celebrity recognition, which made a mistake in identifying the special guest host Jiang Changjian (the "Most Strong Brain" program Season Five host) as Arnold Schwarzenegger. It was this extremely difficult successful challenge that made IYSWIM stand out amongst the crowd and win the championship.

As the overall champion of the CAAD2018 online competition, the ysharma1126 team excelled in all three sub-competitions, winning first place in both the non-targeted and targeted attacks and third place in the defense sub-competition. The team is comprised of:

FAIR & JHU, the champion team in the Defense sub-competition, include two winning CAAD CTF champions, IYSWIM (Xie Cihang, Wu Yuxin), and Johns Hopkins University (United States). The team included notable people such as Professor Alan Yuille, who is a Bloomberg Distinguished Professor of Cognitive Science and Computer Science at Johns Hopkins University; Laurens van der Maatenm who is a research scientist at Facebook AI Research, working on topics in machine learning and computer vision, and Kaiming He, a research scientist at Facebook AI Research, working on computer vision and deep learning. Kaiming is most well-known as the author of "ResNet", one of the most cited papers in deep learning.

Taking fourth-place in the defensive competition was DLight, including He Xindong, a former researcher at Sensetime in Shenzhen Shangtang Technology Co., Ltd, Zeng Xingyu, a researcher at Shenzhen Shangtang Technology Co., Ltd., and He Xindong, a Ph.D. degree major in electronic engineering at the Chinese University of Hong Kong.

In today's "face-recognition era", in which any environment relies on face recognition and validation, AI mapping technology will permeate every aspect of life. Common AI programs, such as face recognition that are applied to smartphones, airport security checks, and smart door locks, are actually AI recognition of images as a certain category. Since most machine learning-based classifiers are highly sensitive to recognize against adversarial examples, subtle modifications that are imperceptible to the human eye will affect machine learning classifiers and make them mis-classify. The adversarial example attack is the technical means of error classification by modifying the AI neural network and making it wrong, thereby identifying weaknesses beforehand.

Therefore, in order to speed up the research on the adversarial attacks, Alexey Kurakin, Ian Goodfellow of Google Brain, and Dawn Song, a professor of computer science at the University of California, Berkeley, jointly launched a simple offensive and defensive match. They called it the Competition on Adversarial Attacks and Defenses 2018, CAAD2018 for short.

After three years of the Robot Agent Challenge, the new competition rules have led eight teams from China, the United States, India and other countries to pit themselves against the challenge environment. On site, teams compete through using self-designed robots to complete specified tasks such as sneaking into simulated labs and stealing secrets. In this sub-category, the OP-USA team from the University of Nevada won the first place.

GeekPwn, the world's first leading platform to explore Artificial Intelligence and professional security, has been focusing on the issue of AI security since 2015. In the future, GeekPwn will continue to promote new forms of competition and work for the long-term promotion of a safe, ecological and healthy cybersecurity environment. In addition to the CAAD CTF initiative, they also held this year's GeekPwn 2018 "Hacking into the future of Artificial Intelligence". Under the theme of the PWN4FUN Challenge, there was no limit to the Open and the PWN4FUN Challenge, which was a special event with different challenge scenarios, Among them, "Recover Blurred Image Challenge", "RFID long-distance reading and writing", "Data Tracking Challenge", "Robot Agent Challenge" and other innovative and interesting competition systems. As contestants constantly kept breaking new boundaries and limits, the host Jiang Changjian couldn't help but marvel at the feats.