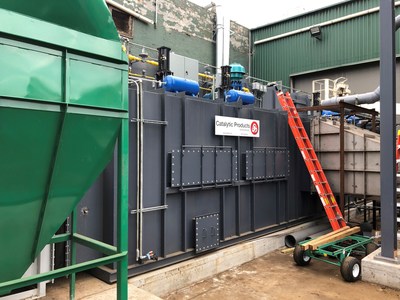 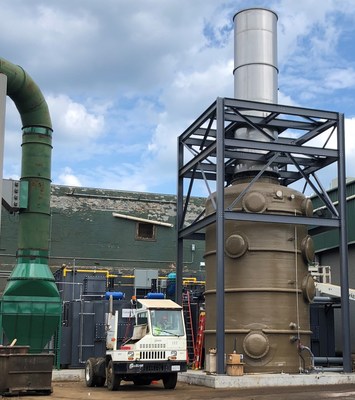 In late 2017, the EPA requested air emissions testing and, in response, General Iron proposed installing the RTO. The air tests, supervised by the EPA in May and June 2018, resulted in a notice of violation regarding VOC emissions, but found no emissions of metals or filterable particulate matter (PM) violated any permitted levels or applicable requirements. The consent order memorializes the installation and operation of the RTO and sets a timetable for demonstrating its efficiency and obtaining the proper permit, fully resolving the notice that the EPA issued in July 2018.

"The RTO sets an example for our industry and makes General Iron one of the first metal shredding facilities in the country to utilize this highly effective technology to control VOC emissions," Adam Labkon, vice president and a fourth-generation owner of General Iron, said. No other metal shredding operation in Chicago or the Midwest has adopted this proven thermal technology.

Under the EPA consent order, General Iron must operate the RTO in a manner that ensures the minimum destruction efficiency of the RTO for VOC emissions from the shredder is 98 percent. Within 90 days, the company must conduct a performance test of the RTO to demonstrate the VOC destruction efficiency. By achieving this result, General Iron will outperform a state regulation designed to help bring the region into attainment with the National Ambient Air Quality Standard for ozone. The regulation requires the overall reduction of shredder VOC emissions of at least 81 percent.

Within three months of completing the performance testing, General Iron will submit an application to the Illinois EPA incorporating operating, monitoring, and record keeping requirements for the RTO into a federally enforceable state operating permit.

In addition to the pioneering installation of the RTO, General Iron is also one of only a few metal shredding facilities in the country, and the only one in the Chicago area, that has installed a high-efficiency air filter, consisting of a capture hood, cyclone, and roll-media filter system, to control PM and metals emissions and the 2018 test results supported the filter's effectiveness. The PM and metals testing required by EPA, including for 17 specific metals, as well as the additional impact assessment that General Iron voluntarily performed, demonstrated that General Iron's PM and metals emissions were far below relevant limits.

General Iron disputed the EPA's July 2018 allegation that fugitive PM emissions were observed during testing the previous month. The EPA was unable to confirm the alleged observation and, as a result, no finding of fugitive emissions was included in the Administrative Consent Order. Also resolved was an allegation that General Iron failed to submit the May 2018 metals sampling results, which the company asserted were invalid. The EPA independently verified those results were invalid and accepted the June 2018 PM and metals testing.

"We are constantly working with the City of Chicago, as well as the state and federal EPA to ensure that we are complying with, or outperforming, applicable environmental requirements," Mr. Labkon said. "Installing the RTO was a substantial proactive investment, but it shows our genuine commitment to being an industry leader in protecting public health and the environment."

Mr. Labkon said General Iron is proceeding with implementing the plan announced last year with Ohio-based Reserve Management Group. Upon closing, RMG will operate General Iron's existing facility through the end of 2020, while a new $80 million metal shredding and recycling facility is being constructed on RMG's property along the Calumet River on Chicago's southeast side. The RTO will be transferred to the new site. Independently, General Iron's property along the North Branch of the Chicago River is being marketed by JLL, a commercial real estate services firm.