SAN DIEGO, Nov. 29, 2018 /PRNewswire/ -- Classy, the #1 online and mobile fundraising platform for nonprofits, saw another record-breaking Giving Tuesday with $15.4 million raised on the platform—up nearly 50% from the year before, significantly surpassing last Giving Tuesday and December 31, 2017, which previously held the title as the company's highest grossing day. The total number of donations on the platform were up 41% with more than 140,000 donations processed across almost 6,000 campaigns. 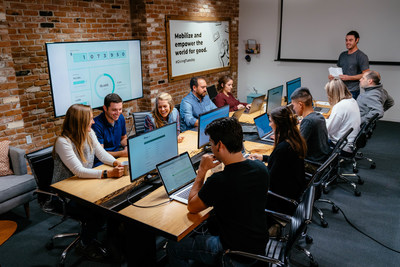 On the heels of several natural disasters in the United States and across the globe, human services—a cause category that includes disaster relief—topped the donation charts with more than $5 million raised on Giving Tuesday via Classy. This aligns with Classy's September 2018 consumer survey which found that donors felt disaster relief was the number one cause needing support on Giving Tuesday.

Furthermore, the number of large online donations (defined as gifts $5,000 or above) grew by 58% this Giving Tuesday—exceeding the overall donation growth rate by over 15 percent—with the largest online gift surpassing $100,000.

While large-scale donations haven't always been associated with online giving, Classy's recent report, "Why America Gives," found that 52% of people find it easiest to make donations digitally, whether on a computer or smartphone—confirming that these increasing online gift sizes signify a continued shift in the public's general comfort with and preference for online giving.

Through Classy's real-time giving hub, which now displays 2018 recap data, visitors were able to track the Giving Tuesday momentum on the Classy platform throughout the day. By 6:00 p.m. CST, the Classy platform had already exceeded its previous Giving Tuesday donation record of $10.3 million in 2017. Donations peaked during the 10:00 a.m., 6:00 p.m., 7:00 p.m., and 8:00 p.m. hours (CST) with more than $1 million donated on Classy during all four 60-minute periods.

"The first Giving Tuesday in 2012 saw $32,000 raised by nonprofits on Classy, so it's beyond inspiring to see over $15 million raised on the platform this year, just six years later," said Scot Chisholm, Classy CEO and Co-Founder. "Our customers' fundraising success this Giving Tuesday leaves us hopeful and enthusiastic for what the rest of the holiday giving season will bring to their critical programs. We're thankful for the millions of donors that participated in this Giving Tuesday, both on and off the Classy platform, and for their impact on the causes most near and dear to their hearts."

Other key highlights from Giving Tuesday 2018 on Classy include:

"For several years, our Giving Tuesday fundraising campaigns have helped us serve thousands of children across the country who have been impacted by a parent's cancer," said Cristin O'Leary Jones, Development Director at Camp Kesem. "We're excited to be named Classy's top fundraiser for the fourth consecutive year and thankful for every donor who contributed to our cause."

A recap of Classy's Giving Tuesday platform activity can be found at https://www.classy.org/giving-tuesday/.

About ClassyClassy is a social enterprise that creates world-class online fundraising software for nonprofits, modernizing the giving experience to accelerate social impact around the world. Based in San Diego, CA, Classy is trusted by organizations of all sizes, from the fastest-growing nonprofits like Team Rubicon and The Trevor Project, to some of the world's largest social organizations, such as The Salvation Army, Robin Hood Foundation, and Shriners Hospitals for Children. Classy also hosts the Collaborative conference and the Classy Awards to spotlight the innovative work nonprofits are implementing around the globe. For more information, visit www.classy.org or follow Classy on Twitter @Classy.