SAN FRANCISCO, Dec. 2, 2020 /PRNewswire/ -- Nextdoor, in conjunction with Brigham Young University in the United States, University of Manchester in the United Kingdom, and Swinburne University of Technology In Australia, has released results from a global scientific study examining how meaningful connections and small acts of kindness impact feelings of loneliness, quality of life, and well-being. 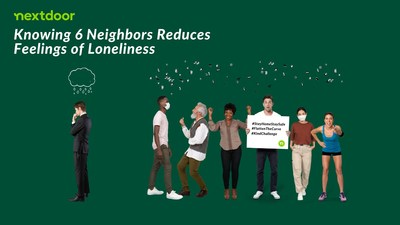 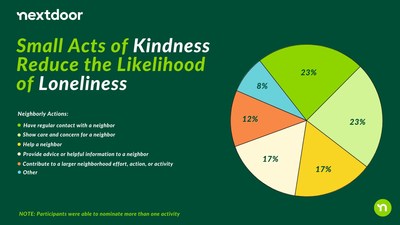 This study, which was conducted by a team of leading loneliness experts, found that knowing as few as six neighbors reduces the likelihood of feeling lonely and is linked to lower depression, social anxiety, and financial concerns related to COVID-19.

The report addressed the impact of the Nextdoor KIND Challenge in the United States, United Kingdom, and Australia where participants performed small acts of kindness in their communities over a four-week period.

Nextdoor's study found that performing small acts of kindness for neighbors also reduces the likelihood of feeling lonely. While 1 in 10 participants said they experienced feelings of loneliness at the start of the study, the number was reduced to 1 in 20 after the study was completed.

Nextdoor connects neighbors based on proximity and not preference, and the research found that the smallest actions, such as saying hello to a neighbor, allows for more harmony, increased neighborhood unity - building a world where everyone has a neighbor to rely on.

"I've spent my career studying the health effects of loneliness, but one of the things that the entire field struggles with is having ways to potentially reduce risk," says Dr. Julianne Holt-Lunstad, who was part of the study's team of top health researchers. "The fact that we were able to find changes—particularly with relatively small, simple steps—is pretty remarkable."

The findings come at a time when loneliness and social isolation are widely reported to be on the rise. According to a recent report from the Ad Council, 36% of participants said they regularly experience at least one of the contributing factors of loneliness. During the COVID-19 pandemic, the number jumped to 44%.

"Each day on Nextdoor, we're inspired by neighbors who are making deep, meaningful connections," says Nextdoor CEO Sarah Friar. "The results of this study prove that knowing our neighbors not only helps our communities, it benefits our health too. By reaching out to those around us, this data confirms that Nextdoor is a unique platform that reduces loneliness and social isolation in our neighborhoods."

Along with Dr. Holt-Lunstad from Brigham Young University in the U.S., the research team consisted of leading loneliness experts, including Australia-based Dr. Michelle Lim from Swinburne University and UK-based Dr. Pamela Qualter from University of Manchester.

About the study:The evaluation of the Nextdoor KIND Challenge was independently undertaken by experts in the field of loneliness research utilizing a Randomized Control Trial (RCT) design, the most rigorous standard for testing effectiveness of treatments and reducing bias. The RCT included randomization to either the KIND Challenge or waitlist control groups, and measurement of change using psychometrically reliable and validated questionnaires. In addition, when examining the KIND Challenge the analyses controlled for important demographic and contextual factors known to impact loneliness, eliminating plausible alternative explanations for change. Therefore, this evaluation was held to thorough and rigorous scientific standards.

About Nextdoor, Inc.:Nextdoor is the neighborhood hub for trusted connections and the exchange of helpful information, goods, and services. We believe that by bringing neighbors together, we can cultivate a kinder world where everyone has a neighborhood they can rely on. Nextdoor is used by neighbors in the United States, the United Kingdom, Germany, France, the Netherlands, Italy, Spain, Sweden, Denmark, Australia and Canada. Nextdoor is a privately held company based in San Francisco with backing from prominent investors including Benchmark, Shasta Ventures, Greylock Partners, Kleiner Perkins, Riverwood Capital, Bond, Axel Springer, Comcast Ventures, and others. For additional information and images, go to nextdoor.com/newsroom.

Nextdoor and Hallmark Channel Partner to Celebrate the Holidays...