VANCOUVER, April 18, 2018 /PRNewswire/ - Goldplay Exploration Ltd. (TSXV: GPLY - the "Company" or "Goldplay"), is pleased to announce that the Company has entered into an option agreement to acquire a 100% interest in the San Marcial Project ("San Marcial") in Sinaloa State, Mexico from a subsidiary of SSR Mining Inc. (NASDAQ: SSRM) (TSX: SSRM) ("SSR Mining"). 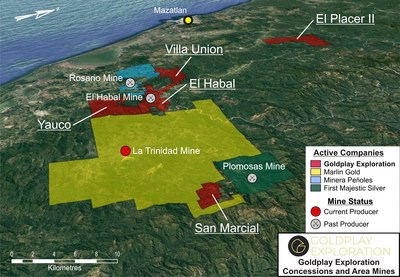 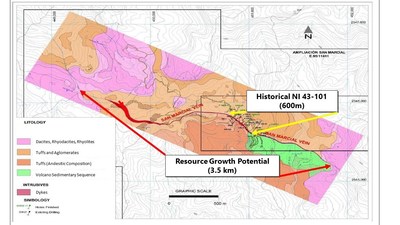 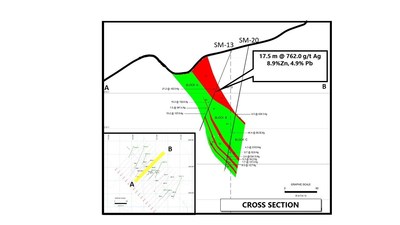 The NSR royalty granted to SSR Mining will be structured in accordance with the following commodity structure and based on the Resource Estimate:

The Company may purchase the NSR royalty from SSR Mining in accordance with the following table:

The Company grants SSR Mining the right to purchase common shares in any future equity financing that the Company may complete during the one-year period following the Approval Date. This grant of participation rights will provide SSR Mining the right to purchase that number of common shares being offered by the Company in such financing as is equal to SSR Mining's then percentage interest in the issued share capital of the Company, for the consideration and on the same terms and conditions as offered to the other potential subscribers under such financing.

Marcio Fonseca, Goldplay's Chief Executive Officer, stated, "Located only 30 km from the Company's El Habal Project, the addition of San Marcial to our portfolio in the Rosario Mining District is an excellent complement to our strategy of consolidating a highly prospective 100% owned portfolio in a world class district. We are delighted with this opportunity and the addition of SSR Mining as a shareholder. The near surface high grade historical resource allied with preliminary historical metallurgical data encourages the Company to continue exploration aiming to expand the resource along the 3.5 km trend. The historical exploration results delineating 14 targets for precious metals explorations represent an upside exploration potential in San Marcial for future discoveries. The Company looks forward to advancing exploration programs at San Marcial".

Geology and Mineralization of the San Marcial Project

The mineralization at San Marcial is typical of the low sulphidation, epithermal systems hosted near the contact of the Tertiary, Upper and Lower Volcanic units in the Sierra Madre Occidental Geologic Province. This Province hosts many important precious metal mines and prospects along its 1,500 km long, 250 km wide extent.

The known precious metals prospects at San Marcial are hosted on what appears to be a set of northwest trending fault structures with a 60-northeast dip which is close to the prospective unconformity (Figure 03). Along the 3.5 km mineralized trend, there are highly altered hydrothermal breccias, conglomerates and relatively fresh dacite porphyry intrusive. Faulting is an important structural feature related to the silver gold zinc lead copper mineralization and the intersection of east-west with northwest structures are considered the most prospective areas for exploration at San Marcial.

The historical exploration programs completed by previous operators have discovered prospective zones with gold values at surface associated with quartz stickwork hosted in silicified and crackled andesites. Similar gold mineralization style has been identified in the San Marcial historical NI 43-101 resource area, however it has not been included in the resource estimation, representing exploration opportunities.

San Marcial should be regarded as a mid-stage project which may have a significant economic potential should the mineralization prove to be more extensive than is presently indicated by the current resource estimate.

San Marcial hosts a significant drill and exploration database. The Company aims to review all data and delineate an aggressive exploration program not only targeting resource expansion with drilling program along the 3.5 km mineralized trend, but also advance exploration on the 14 historical exploration targets with objective of delineating new discoveries.

The Qualified Person under the NI 43-101 for this news release is Marcio Fonseca, President and CEO for Goldplay, who has reviewed and approved its contents.

Goldplay is an exploration-stage company with a strategic portfolio in the Rosario Mining District, Sinaloa, Mexico. Goldplay is currently focused on advancing exploration activities including drilling on its 100%-owned El Habal Project.

Goldplay is providing the historical data related to the San Marcial for informational purposes only. Goldplay has not completed any quality control assurance program to the historical data. Although the Company believes that the work was completed by competent persons to the standards of the day and the Company cautions the reader that the drill results are historical in nature and have yet to be verified by the Company's "Qualified Person" under NI 43-101.