NEW YORK, July 28, 2021 /PRNewswire/ -- On Wednesday, the Democratically-controlled House Oversight Committee responded to a bombshell report in The Intercept by Status Coup's Jordan Chariton and Jenn Dize on the Flint water crisis that revealed phones belonging to top officials in former Michigan Governor Rick Snyder's administration were erased and/or altered—with key communications and data from the 2014-2015 period Flint received toxic drinking water from the Flint River gone when criminal investigators obtained the phones. 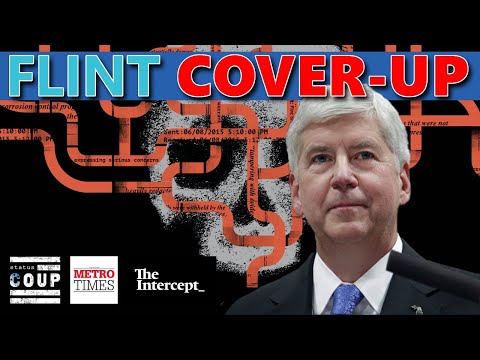 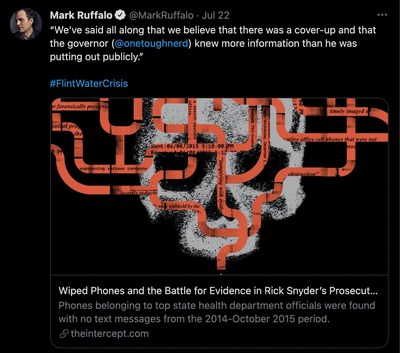 "It would be deeply troubling if any of the officials involved in the poisoning of Flint's children destroyed evidence of their misconduct," Rep. Carolyn Maloney, Chairwoman of the House Oversight Committee, told The Intercept, who recently broke this bombshell story alongside the Detroit Metro Times. "Governor Snyder obstructed the Committee's investigation from the outset and set the tone that his decisions were above accountability. Governor Snyder made the choice to put money over the lives of the children in Flint and he must be held accountable."

In response to the story, the committee is investigating the new allegations, a committee source told The Intercept. Governor Snyder testified in front of the committee in 2016 that he was unaware of the deadly waterborne Legionnaires' Disease that killed untold numbers of Flint residents until January of that year. The Intercept's reporting shows criminal investigators concluded the governor misled Congress and knew about the outbreak as early as October 2014.

Chariton and Dize's reporting shows the phone belonging to Governor Snyder's press secretary was erased when she left her role in 2015 shortly before the launch of the Flint criminal investigation. Prosecutors also found phones belonging to top health department officials with no messages on them for the entire 18-month period Flint used the Flint River. State environmental officials' phones were also allegedly erased soon after Snyder announced Flint had toxic water in October 2015. Finally, the report revealed that Gov. Rick Snyder evaded prosecutors, refusing to provide key Flint documents for three years.

"We've said all along that we believe that there was a cover-up and that the governor knew more information than he was putting out publicly," Lonnie Scott, executive director of Progress Michigan, told The Intercept.

The question of what Snyder knew and when— and what role he and his administration played in covering up the outbreak of the deadly waterborne Legionnaires' Disease in Flint that killed and sickened an untold number of residents, is of increasing importance as the former governor now faces trial in connection with his handling of Flint's water crisis.

The investigative report has received accolades and calls to action from Congress to Hollywood.

Congresswoman Rashida Tlaib said of the story by Chariton and Dize, "30K+ #Flint schoolchildren were exposed to a neurotoxin known to have detrimental effects on children's developing brains and nervous systems and Snyder covered it up. These children and their families are still waiting to see justice!"

Avengers movie star and humanitarian Mark Ruffalo tweeted, "We've said all along that we believe that there was a cover-up and that the governor (@onetoughnerd) [Rick Snyder] knew more information than he was putting out publicly. #FlintWaterCrisis"

Academy Award winner Susan Sarandon tweeted, "How was Snyder only charged with a misdemeanor and why has the Dem-controlled House Oversight Committee not brought him back in for perjuring himself???"

Erin Brockovich, famously played by Julia Roberts in a much-heralded movie of the same name about her heroic activism, said, "This is the biggest coverup story you're going to read. They poisoned the town of #Flint and covered it up. #Criminals #FlintWaterCrisis."

Peter Hammer, a Wayne State University law professor who produced a definitive report on the Flint water crisis that identified structural racism as its root cause, expressed serious concerns about Snyder's evasion of prosecutors' requests for years, as well as wiped phones belonging to state officials.

"If true, this is a disturbing pattern that goes far beyond the problems of having inadequate state laws requiring disclosure of public records," Hammer told The Intercept. "All citizens have an obligation to comply with criminal processes; this is substantially more true for public officials. There can be no accountability without transparency."

Hammer added that if he had the details The Intercept is revealing at his disposal from the very beginning of his analysis of the water crisis, his conclusion would have "shifted towards intentional forms of misconduct and criminal behavior."

On whether Snyder was involved in efforts to cover up state officials' knowledge of the Flint water crisis, Hammer was blunt.

"If the actions reported here are accurate, it is impossible for me to believe that the governor was not aware of the efforts to hide and destroy damaging information."