LOS ANGELES, Oct. 23, 2019 /PRNewswire/ -- GRAMMY® Award-winning singer and songwriter Enrique Iglesias with the help of his fans has raised a third of a million dollars for Save the Children. In appreciation of this fundraising milestone, Save the Children and Enrique would like fans to know that their generous contributions made the world a little better for children.  Enrique and his team invited superfan Lillian Robinson to sign a life-size symbolic check on behalf of fans who participated to support the global humanitarian organization. For more information on how to get involved and to donate, please visit HERE. View campaign images below and download here. 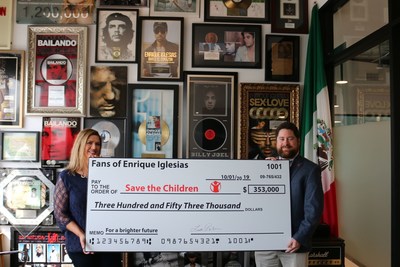 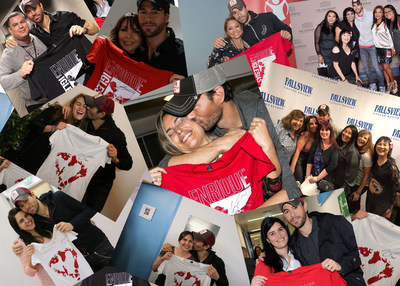 Enrique, a strong supporter of Save the Children since 2015, was recently named a "changemaker for children" by the international humanitarian organization for raising his voice and mobilizing his fans to raise funds for the most vulnerable children.

Through Enrique's encouragement, fans from all over the world rallied to support his favorite cause through online contributions, fundraisers, auctions, merchandise and meet and greets that contributed to $353,000 and counting. This total includes more than $75,000 for the organization's HEART (Healing and Education through the Arts) programs in Mexico, see photos here. In addition, through a partnership with Microsoft, Enrique donated $200,000 in software to strengthen literacy programming for elementary school-age children in El Salvador, Guatemala and Peru.

"I have the best fans on the planet," says Enrique. "They never cease to amaze me with their incredible compassion and support. I am so proud of what we have accomplished and I am thankful for my partnership with Save the Children. Together, we are making the world a little better for children."

In celebration of Save the Children's 100th year of changing children's lives, the organization is honoring changemakers like Enrique who have used their influence to drive change for the most marginalized and deprived children in the United States and around the world.

Enrique Iglesias: The multi-platinum pop icon, Enrique Iglesias is a global superstar recognized for his musical versatility across pop and urban genres in Spanish and English. He has sold more than 180 million albums worldwide, released 10 studio albums and 3 greatest hits compilations. He has headlined 10 sold-out world tours and performed in front of 10+ million fans.

He's undeniably the biggest Latin recording artist in music history achieving 154 #1 single's across Billboard charts with a total of 27 #1 singles on the Billboard's Hot Latin Songs Chart. He currently holds the record for most number ones in the chart's history. Enrique Iglesias is known as pop music's most influential singer/songwriters of our time with the highest success in English/Spanish crossover. He has collaborated with megastars such as Pitbull, Whitney Houston, Lionel Richie, Juan Luis Guerra, Marco Antonio Solis and more.

Enrique has been celebrated with countless awards as a singer and songwriter that include multiple GRAMMYs, Billboard Awards, ASCAP and more. He remains as one of the most streamed and viewed artists with over 14 billion views on YouTube/VEVO and 14 billion in streams. For more information visit: www.enriqueiglesias.com.

Save the Children:Save the Children believes every child deserves a future. Since our founding 100 years ago, we've changed the lives of more than 1 billion children. In the United States and around the world, we give children a healthy start in life, the opportunity to learn and protection from harm. We do whatever it takes for children – every day and in times of crisis – transforming their lives and the future we share. Follow us on Facebook, Instagram, Twitter and YouTube.