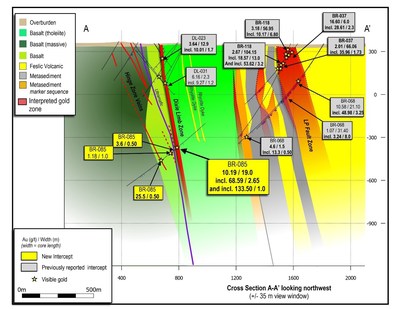 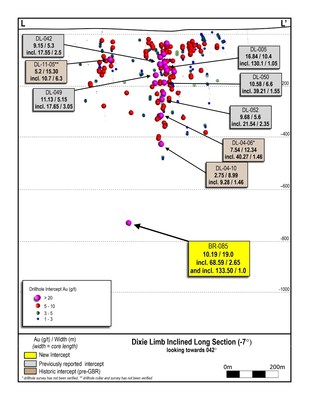 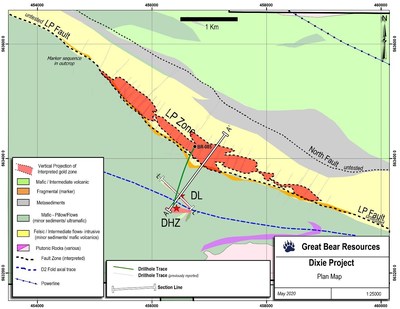 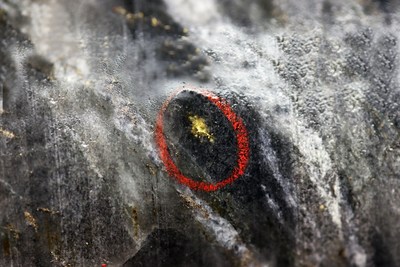 LP Fault drill hole BR-085 (originally reported on April 9, 2020) was extended from 524 metres to a downhole depth of 1,509 metres to intersect the adjacent Dixie Limb zone at depth. It has approximately doubled the confirmed vertical depth of the Dixie Limb zone, intersecting the zone's deepest, widest, and highest-grade interval to date. The drill hole also intersected gold bearing quartz veins that may represent the lateral and vertical extension of the Hinge zone at depth. Results suggest the Dixie Limb and Hinge zones may coalesce at depth. Figures 1, 2 and 3.

Chris Taylor, President and CEO of Great Bear said, "With our first deep drill hole, we have doubled the known vertical extent of the Dixie Limb and intersected new Hinge zone style veins that may represent extensions to the Hinge zone.  Results also suggest the Dixie Limb and Hinge zone veins may merge at depth, an idea we are keen to test with further drilling.  BR-085 intersected identical geology to the upper Dixie Limb zone, however for the first time we observed Dixie Limb style and Hinge zone style gold mineralization in close proximity to each other.  The increased grades and widths of gold mineralization are also consistent with the trend of increasing strength of gold mineralization at depth seen frequently at Dixie.  These results define a new, high-priority exploration target that has the potential to combine the predictable geometry of the Dixie Limb zone with the higher gold grades of the Hinge zone.  Several of the existing LP fault drill holes are ideally located to be similarly extended to deeply target the Dixie Limb and Hinge zones at significantly lower costs than if we had to collar new holes from surface."

*True widths are 90% of interval widths based on intersection points of the drill hole intercept with the geological model and oriented drill core data.

About the Dixie Limb and Hinge zones:

The Dixie Limb and Hinge zones are the largest gold zones adjacent to the LP Fault zone that have been identified to date.  Both zones were drilled by Great Bear from 2017 – 2019, with summary highlights provided in Table 2.  Gold mineralization at both zones has been drilled from within a few metres of surface, and now to a depth of 748 – 840 metres, respectively.  Both zones remain open to extension along strike and at depth.

The Dixie Limb zone strikes approximately parallel to the LP Fault zone, 500 metres to the southwest.  It consists of the steeply dipping, highly regular planar contact between calc-alkaline basalts and high-iron tholeiitic basalts, frequently with argillite present at the contact.  Gold mineralization occurs within silica-sulphide replacement zones and quartz veins at this contact.  The gold zone has been intersected along approximately 500 metres of strike length in more than 100 drill holes and is well defined both laterally and vertically.

The Hinge zone is a gold-bearing quartz vein swarm that is situated subparallel to the Dixie Limb zone, 50 – 200 metres to the southwest.  It is defined over a strike length of approximately 500 metres in more than 80 drill holes.  Hinge zone veins occur in anastomosing subparallel sets of one to six veins across a width of up to 140 metres, and frequently have distinctive red-brown hydrothermal biotite alteration. The Hinge zone gold-bearing veins have similar characteristics to those hosting the other gold deposits in the Red Lake area, including the High Grade Zone at the Red Lake Gold Mine, now owned and operated by Evolution Mining.

Drilling at the adjacent LP Fault zone has intersected gold mineralization to a vertical depth of approximately 500 metres, and along a strike length of approximately 11 kilometres. The LP Fault also remains open to extension along strike and at depth.

The Company continues to undertake its fully-funded 2020 drill program.  The majority of planned drilling consists of approximately 300 drill holes being completed at an average 75 metres vertical and lateral spacing along a 5 kilometre by 500 metre deep grid of drill holes along the LP Fault discovery.  This grid drill program is on track to be completed by the end of 2020.

Additional deep drilling, similar to BR-085, is also planned at all gold zones including the LP Fault, and will be completed periodically throughout 2020.

Drill collar location, azimuth and dip for BR-085 included in this release are provided in the table below:

About the Dixie Project

The Dixie Project is 100% owned, comprised of 9,140 hectares of contiguous claims that extend over 22 kilometres, and is located approximately 25 kilometres southeast of the town of Red Lake, Ontario. The project is accessible year-round via a 15 minute drive on a paved highway which runs the length of the northern claim boundary and a network of well-maintained logging roads.

Drill core is logged and sampled in a secure core storage facility located in Red Lake Ontario.  Core samples from the program are cut in half, using a diamond cutting saw, and are sent to Activation Laboratories in Ontario, an accredited mineral analysis laboratory, for analysis. All samples are analysed for gold using standard Fire Assay-AA techniques. Samples returning over 10.0 g/t gold are analysed utilizing standard Fire Assay-Gravimetric methods.  Pulps from approximately 5% of the gold mineralized samples are submitted for check analysis to a second lab.  Selected samples are also chosen for duplicate assay from the coarse reject of the original sample.  Selected samples with visible gold are also analyzed with a standard 1 kg metallic screen fire assay.  Certified gold reference standards, blanks and field duplicates are routinely inserted into the sample stream, as part of Great Bear's quality control/quality assurance program (QAQC).  No QAQC issues were noted with the results reported herein.

Forward-looking information are based on management of the parties' reasonable assumptions, estimates, expectations, analyses and opinions, which are based on such management's experience and perception of trends, current conditions and expected developments, and other factors that management believes are relevant and reasonable in the circumstances, but which may prove to be incorrect.