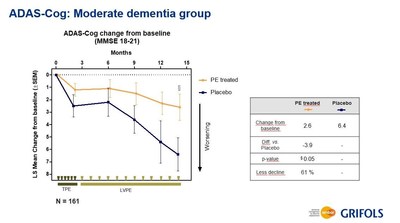 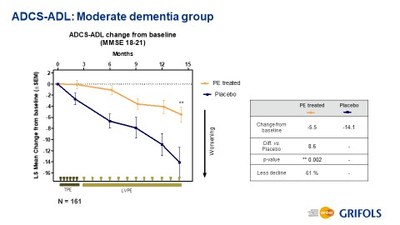 The combination of Plasmapheresis (a well-known and safe procedure used in plasma exchange) with Albutein® 20% (Albumin - a safe, well tolerated plasma protein with multiple properties) has demonstrated a significant reduction in the progression of the disease in the moderate AD patients participating in the study and may offer a new treatment pathway for the illness.

Results in the pre-specified cohort of moderate AD patients demonstrated a statistically significant reduction of 61% in disease progression from baseline across both primary efficacy endpoints as measured by the Alzheimer's Disease Assessment Scale-cognitive (ADAS-Cog) and the Alzheimer's Disease Cooperative Study – Activities of Daily Living (ADCS-ADL) scales.  While a consistent delay in the progression of disease was observed in the treatment arms for the pre-specified mild cohort (the placebo arm presented a similar pattern), and the difference did not reach statistical significance.

The primary outcomes of the study were the changes from baseline to 14 months in the validated scales of cognition and activities of daily living, ADAS-Cog and ADCS-ADL, respectively. The pre-specified primary analysis was performed on the total study population and included the assessment of the differences to placebo in the primary outcomes of the following study arms: a) three combinations of plasma exchange with albumin and IGIV replacement that shared the same volume of plasma removed (plasmapheresis) regardless of the arm, b) an arm with all patients treated with plasma exchange, and c) an arm that included all patients treated with plasma exchange analyzed by disease severity: mild AD and moderate AD.

In the arm with all patients treated with plasma exchange analyzed by disease severity, patients with mild AD did not decline but the same lack of progression was observed in the placebo group for both ADAS-Cog and ADCS-ADL scales, suggesting that more follow-up time is needed to observe disease progression in milder disease. Conversely, patients with moderate AD treated with plasma exchange showed a 61% less decline compared to placebo for both, ADAS-Cog and ADCS-ADL scales with statistical significances of 0.05 (significant) and 0.002 (highly significant), respectively. In addition, when moderate AD patients were analyzed by plasma exchange combination type, all three combinations achieved statistical significance for ADCS-ADL.

Fundació ACE in Barcelona, Spain and the Alzheimer Research Center of the University of Pittsburgh, USA have been instrumental partners in the AMBAR research and in Grifols' Alzheimer's program since its initiation in 2004. Investigators from both institutions have praised the results and called out the new era that these new findings may open in the fight against Alzheimer's disease.

"The treatment effect observed in the group with moderate severity is remarkable and those findings open new avenues for the research of neurodegenerative disorders in the adult that have the potential to offer the Alzheimer's disease patients a new modality of treatment", Oscar Lopez, M.D., Director of the Alzheimer´s Disease Research Center of the University of Pittsburgh.

"We are very pleased with the results and we celebrate them as a breath of fresh air that brings hope to the Alzheimer's patients and their families. This is the most significant development in the treatment of patients with moderate Alzheimer's disease in over 15 years," said Mercé Boada, M.D., Ph.D., Director of Fundació ACE.

"As a clinician it is also important to note that this procedure is safe and feasible. We have conducted more than 1000 plasma exchanges in our center and close to 5000 in the total study", continued Dr. Boada.

Víctor Grífols Roura, Chairman of Grifols, noted "These results unlock a new era in the treatment of Alzheimer's disease and Grifols will continue to explore the potential of plasma proteins and plasma exchange in further studies".  He also stated that "We are very excited with the results, for the progress we have made and for what they may represent for society".

AMBAR is an international, multicenter, randomized blinded and placebo controlled, parallel group clinical trial that enrolled mild and moderate Alzheimer patients from 41 Treatment Centers in Europe and the United States. The study was designed to evaluate the efficacy and safety of short-term plasma exchange followed by long-term plasmapheresis with infusion of Human Albumin combined with intravenous immunoglobulin in patients with mild and moderate AD.

AMBAR was designed to evaluate whether the progression of Alzheimer's could be stabilized through plasma exchange, a process that entails periodically extracting plasma and replacing it with a specific albumin solution (Albutein®). AMBAR is based on the hypothesis that most of the amyloid-beta protein – one of the proteins accumulated in the brains of Alzheimer's patients – is bound to albumin and circulates in plasma. Extracting this plasma may flush amyloid-beta peptide from the brain into the plasma, thus limiting the disease's impact on the patient's cognitive functions.  Additionally, Albumin may represent a multi-modal approach to the management of the disease due to it's binding capacity, antioxidant, immune modulatory and anti-inflammatory properties.

The AMBAR study included 496 mild and moderate Alzheimer patients, randomized in three treatment groups and one control (placebo) group. The participants were 55-85 years old and the efficacy of treatment was measured by changes in cognition and in daily living activities scores.  An independent contract research organization (CRO), oversaw the trial's clinical monitoring phase and managed the data collection and analysis stages. The trial employed a randomized and double-blind design, meaning that neither patients nor evaluators knew whether subjects were receiving the treatment or the placebo.

The company began its research on Alzheimer's disease in 2004 with several pre-clinical trials, two pilot studies and a Phase II clinical trial before launching the AMBAR trial.

Alzheimer's disease is a neurodegenerative pathology characterized by the death of neurons in the brain. Described as a 21st-century epidemic, it currently has no cure and its prevalence is expected to rise, especially among elderly populations in developed countries.

The most common cause of dementia, Alzheimer's causes memory loss, intellectual impairment, behavioral change, and the inability to perform daily tasks. It also has a major psychological, physical, social and economic impact on caretakers, society, and healthcare systems.

Information, graphic resources and audiovisual material on the AMBAR study and Alzheimer's disease are also available on Grifols' website: www.grifols.com

Grifols is a global healthcare company with more than 75 years of legacy dedicated to improving the health and well-being of people around the world. Grifols produces essential plasma-derived medicines for patients and provides hospitals and healthcare professionals with the tools, information and services they need to help them deliver expert medical care.

Grifols' three main divisions – Bioscience, Diagnostic and Hospital – develop, produce and market innovative products and services that are available in more than 100 countries.

With a network of 250 plasma donation centers, Grifols is a leading producer of plasma-derived medicines used to treat rare, chronic and, at times, life-threatening conditions. As a recognized leader in transfusion medicine, Grifols offers a comprehensive portfolio of diagnostic products designed to support safety from donation through transfusion. The Hospital Division provides intravenous (IV) therapies, clinical nutrition products and hospital pharmacy systems, including systems that automate drug compounding and control drug inventory.

Grifols is headquartered in Barcelona, Spain and has 20,000 employees in 30 countries.

In 2017, sales exceeded 4,300 million euros. Grifols demonstrates its strong commitment to advancing healthcare by allocating a significant portion of its annual income to research, development and innovation.

The facts and figures contained in this report that do not refer to historical data are "future projections and assumptions". Words and expressions such as "believe", "hope", "anticipate", "predict", "expect", "intend", "should", "will seek to achieve", "it is estimated", "future" and similar expressions, in so far as they relate to the Grifols group, are used to identify future projections and assumptions. These expressions reflect the assumptions, hypotheses, expectations and predictions of the management team at the time of writing this report, and these are subject to a number of factors that mean that the actual results may be materially different. The future results of the Grifols group could be affected by events relating to its own activities, such as a shortage of supplies of raw materials for the manufacture of its products, the appearance of competitor products on the market, or changes to the regulatory framework of the markets in which it operates, among others. At the date of compiling this report, the Grifols group has adopted the necessary measures to mitigate the potential impact of these events. Grifols, S.A. does not accept any obligation to publicly report, revise or update future projections or assumptions to adapt them to events or circumstances subsequent to the date of writing this report, except where expressly required by the applicable legislation. This document does not constitute an offer or invitation to buy or subscribe shares in accordance with the provisions of the following Spanish legislation: Royal Legislative Decree 4/2015, of 23 October, approving recast text of Securities Market Law; Royal Decree Law 5/2005, of 11 March and/or Royal Decree 1310/2005, of 4 November, and any regulations developing this legislation. In addition, this document does not constitute an offer of purchase, sale or exchange, or a request for an offer of purchase, sale or exchange of securities, or a request for any vote or approval in any other jurisdiction. The information included in this document has not been verified nor reviewed by the external auditors of the Grifols group.

Grifols further expands its activity in Africa with agreement to...