SEOUL, South Korea and VINH LONG, Vietnam, June 5, 2019 /PRNewswire/ -- To commemorate World Environment Day on June 5, Hanwha is launching the "Clean Up Mekong" campaign in Vinh Long Province in collaboration with the Vietnam Environment Administration and the Global Green Growth Institute (GGGI) of Vietnam. The campaign will combat the pollutants floating in the Mekong River. Central to the campaign's launch was the unveiling ceremony for solar-powered boats, donated by Hanwha, that will be used to clean the river. 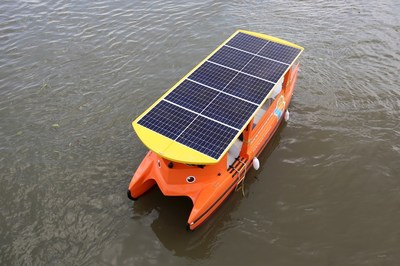 30 local university student volunteers also attended the ceremony. After the event, everyone took part in the clean-up effort by picking up refuse out of the river.

The Mekong is a trans-boundary river that runs through China, Myanmar, Laos, Thailand, Cambodia, and finally Vietnam before discharging into sea. It moves 475 km3 of water annually and supports over 70 million people who rely on it as their main source of water.

However, indiscriminately disposed waste and sewage discharge along the river's length has turned the Mekong into one of the world's ten most polluted rivers. The pollutants ultimately float into the ocean and threaten marine life. As Vietnam is the last country the river runs through, the Clean Up Mekong campaign aims to remove waste before it enters the ocean, at the riverside city of Vinh Long.

The key to the campaign's clean-up efforts will be solar-powered boats donated by Hanwha. Powered and propelled by Hanwha Q CELLS' Q.PEAK solar modules, the boats will be used to scoop up waste in the Mekong River without emitting any greenhouse gases or other pollutants. The boats are also silent, resulting in minimal disturbance to local wildlife.

This campaign is the latest in Hanwha's ongoing efforts to combat climate change and energy poverty, and to encourage responsible consumption in accordance to the United Nations' Sustainable Development Goals (UN SDGs).

The Hanwha Solar Forest campaign is another initiative to support the UN SDGs that works to combat desertification and air pollution by planting new forests with trees grown in solar-powered nurseries. This project was cited as the world-first practice for utilizing solar energy to fight desertification at the United Nations Conventions to Combat Desertification (UNCCD) COP Summit in 2011. And through its Happy Sunshine initiative, Hanwha has donated 1,779kW worth of solar power systems to 254 community development projects and isolated communities since 2011.

GGGI and Hanwha have long worked together to advance green growth and now, given the mounting challenge of solid waste in Vietnam, have come together with the government of Vietnam on this crucial campaign to clean up the Mekong. This campaign links with GGGI's other efforts to improve waste management, such as recycling, reducing and waste to energy technologies.

Ms. Nguyen Thi Thien Phuong, Director General of the Department of Science, Technology and International Relations, Vietnam Environment Administration, said, "I'm pleased that South Korea and Vietnam can work together to solve climate change and environmental issues. I'm hoping that this campaign will be successful and spread throughout the whole of Vietnam."

"I am very proud to be working with Hanwha on an innovative idea to solve the Mekong's waste problem with these solar-powered boats here in Vinh Long," said Tran Hoang Tu, Vice President of Vinh Long Permanent Provincial People's Committee. "Vinh Long will continue to use these donated solar-powered boats to keep the Mekong River clean.

"Solid waste is one of the top issues facing cities in Vietnam," added Hanh Le, Deputy Country Representative of the Global Green Growth Institute in Vietnam. "With Hanwha's solar boats, and the awareness campaign around it, we can begin to see a cleaner Mekong river, which will benefit all of Vietnam".

Ahead of the handover ceremony for the solar-powered boats, Hanwha implemented a social media campaign to raise public awareness on the environmental issues caused by water pollution. The campaign also speaks to the importance of environmentally friendly energy sources and its benefits. The campaign was aimed at supporting the UN SDGs Target 12.5 and 12.8 to substantially reduce waste generation and to ensure that people everywhere had the information necessary for sustainable development and lifestyle that is in harmony with nature.

Vietnamese citizens were encouraged to spread the news of the campaign by uploading messages of encouragement and support on Facebook -- the more messages got uploaded, the bigger a solar hero character became. As a result, 3.4 million video views and more than 9,000 shares were posted on Facebook in just a week. The awareness campaign proved to be a success.

More than just a business opportunity

Back in December of 2018, Hanwha Chairman, Seung Youn Kim, reiterated Hanwha's commitment to Vietnam, saying: "As a member of the local community, Hanwha won't just be concerned with how we can contribute to the economy, but also how we can help address environmental issues as well."

The Clean Up Mekong campaign builds on this commitment the chairman spoke of and bring about real progress towards cleaning up Vietnam's environment. Prior to Hanwha's solar-powered boat donation, clean-up efforts along the Mekong River were only limited to regions with resources large enough to support them. Waste would have to be manually removed from the water using boats powered by diesel or heavy oil that would inevitably add to the pollution through leaks and carbon emissions.

The boats donated by Hanwha make the clean-up effort significantly greener. Powered entirely by five high-performance Q.PEAK solar modules from Hanwha Q CELLS, they don't emit any pollutants during use. A conveyor belt system installed on board makes collecting waste from the Mekong River's surface faster and more efficient.

With regard to Hanwha's ongoing efforts to make positive environmental change, Sun-Mok Choi, President and Head of the Hanwha Communications Committee, said, "As the world's top solar energy provider, Hanwha is contributing to the UN's Sustainable Development Goals through sustainable environment initiatives that utilize clean energy." He added, "In Vietnam, which is an important strategic market for Hanwha, we will set up an infrastructure that will change the way sustainable environment initiatives are undertaken in a fundamental and environmentally friendly manner."

Hanwha Group, founded in 1952, is one of the Top 10 business enterprises in South Korea and a "FORTUNE Global 500" company. Hanwha Group has 70 domestic affiliates and 325 global networks in three major sectors: manufacturing & construction, finance, and services & leisure. With a track record of 65 years as an industrial leader, Hanwha's manufacturing and construction businesses encompass a broad range of fields from chemicals & materials, aerospace & mechatronics, total solar energy solutions, and global construction. The finance network, covering insurance, asset management and securities, is the second largest non-bank financial group in South Korea. The services and leisure sector offers premium lifestyle services with retail and resort businesses.

Based in Seoul, GGGI is an intergovernmental organization that supports developing country governments transition to a model of economic growth that is environmentally sustainable and socially inclusive. GGGI delivers programs in over 35 partner countries with technical support, capacity building, policy planning & implementation, and by helping to build a pipeline of bankable green investment projects.

More on GGGI's events, projects and publications can be found on: www.gggi.org