"In IoT projects, many devices on the edge have limited storage hardware and the data is only valuable for a short period of time. With the ability to replicate and store data in the cloud, users can optimize their on-device storage for the most impactful analytics," said Zach Fowler, Chief Product Officer of HarperDB. "It's important that we constantly evolve the HarperDB solution to meet industry demands. With enhanced geo-analysis and the ability to concurrently run large data sets in the background, our customers have a competitive advantage they can exploit for success."

Geographical Data Analysis: HarperDB's dynamic schema allows for geo analysis and reaction to constantly evolving IoT data in real-time, directly from the edge. As more IoT sensors are deployed, the complexity around data analysis will increase dramatically. With this new feature, companies can now gain deep analysis by intelligently parsing geo data in an HTAP database and eliminate the need for multiple database products, which will reduce complexity.

Utilizing the industry standard of GEOJSON users can out-of-the-box integrate with MapBox, Google Maps, and many other GIS applications. Traditionally, geo data would be analyzed in a GIS or spatial database. With HarperDB, companies can now combine workloads for applications, data warehousing, and spatial analysis into a single product.

"It is especially critical in IoT for companies to be able to immediately identify where systems need attention in real-time as their data is transacting or to understand where it trends overtime. With HarperDB's geo-analysis functions, users have the ability to visualize and understand their data as it occurs in the real world by gaining insights into specific locations, regions or their entire topology," said Kyle Bernhardy, Chief Technology Officer of HarperDB.

Time to Live: This new feature gives companies the ability to run the full power of HarperDB on IoT devices. Developers can now make better decisions about what data needs to be stored on the edge without incurring further storage or hardware costs. With Time to Live auto expire data, users can store the most important information on the edge while retaining full access to all historical data in the cloud.

Jobs: Data scientists and developers migrating to HarperDB can perform large operations and expand the capability to ingest data from flat files, backup and recovery. Additionally, with the Jobs feature, users can now run massive and timely data sets to ensure transparency and continuity of operations.

"We're seeing a rapid increase in the deployment of IoT devices in nearly every industry from oil and gas, logistics, military defense, telecommunications, agriculture and more. As these organizations continue to expand their IoT and edge computing strategies, they need a database built to handle the amount of data they're producing," said Kyle Bernhardy, Chief Technology Officer of HarperDB. "The addition of these features allow data scientists and developers, in any field, to migrate existing data into the HarperDB platform while capturing and analyzing large data sets on smaller hardware footprints."

HarperDB was founded to deliver a simple solution that could be used by any developer of any skill level without sacrificing scale or performance. The HarperDB database solution is being used for IoT project development, app development and enterprise data warehouses. Founded in 2017 and headquartered in Denver, HarperDB's founding team has spent many years working in enterprise architecture, software integration, software development, and software sales. 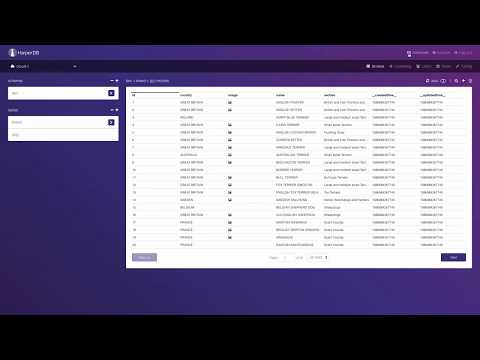