LEWISVILLE, Texas, Oct. 5, 2017 /PRNewswire/ -- New research from Hawk Incentives, a Blackhawk Network business that provides rewards and incentive solutions, finds that the number of consumers that look for deals when they shop is on the rise. Furthermore, among those surveyed, deal seeking is occurring before, during and after the shopping process, and across different income, age and gender groups. 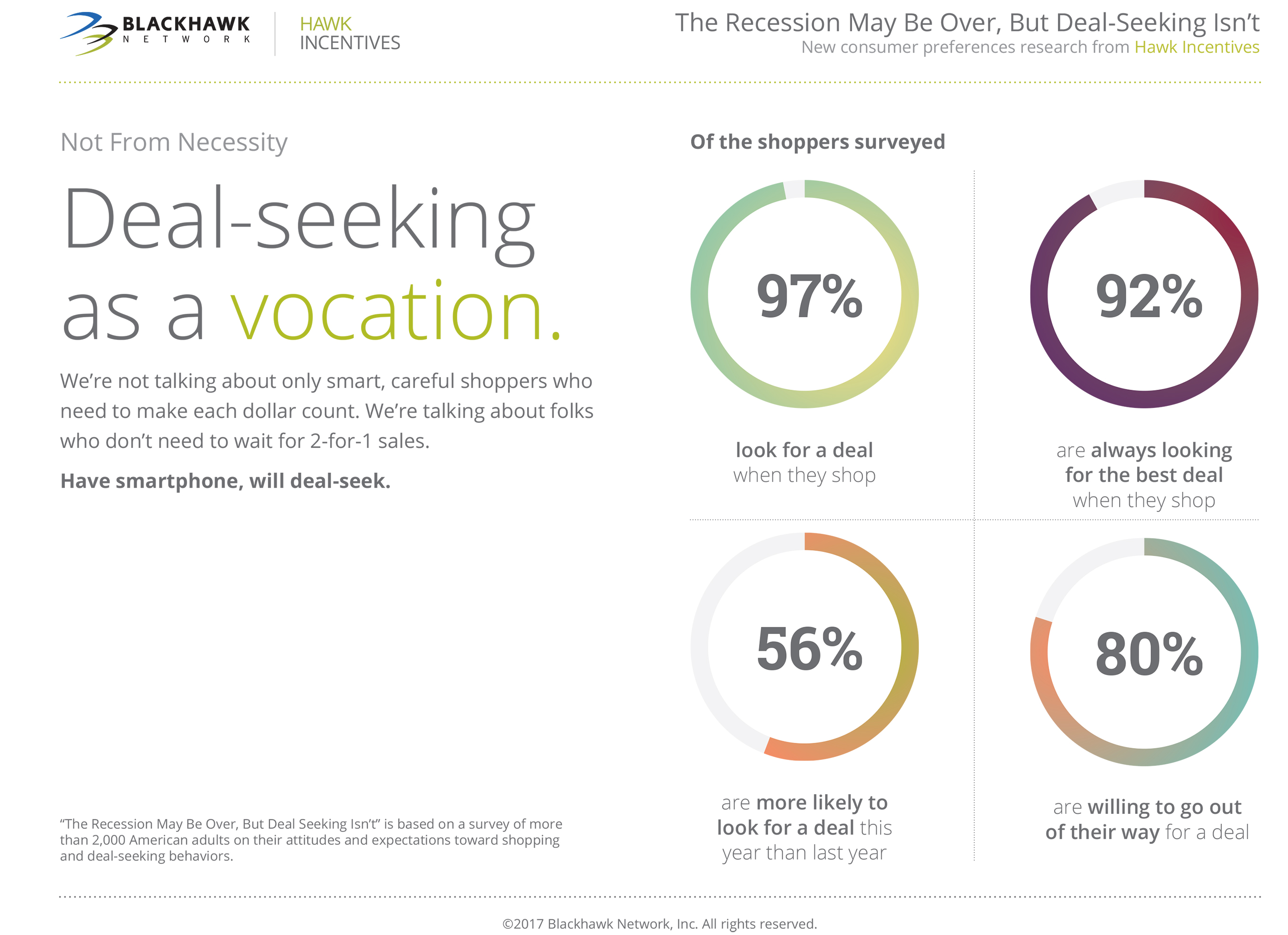 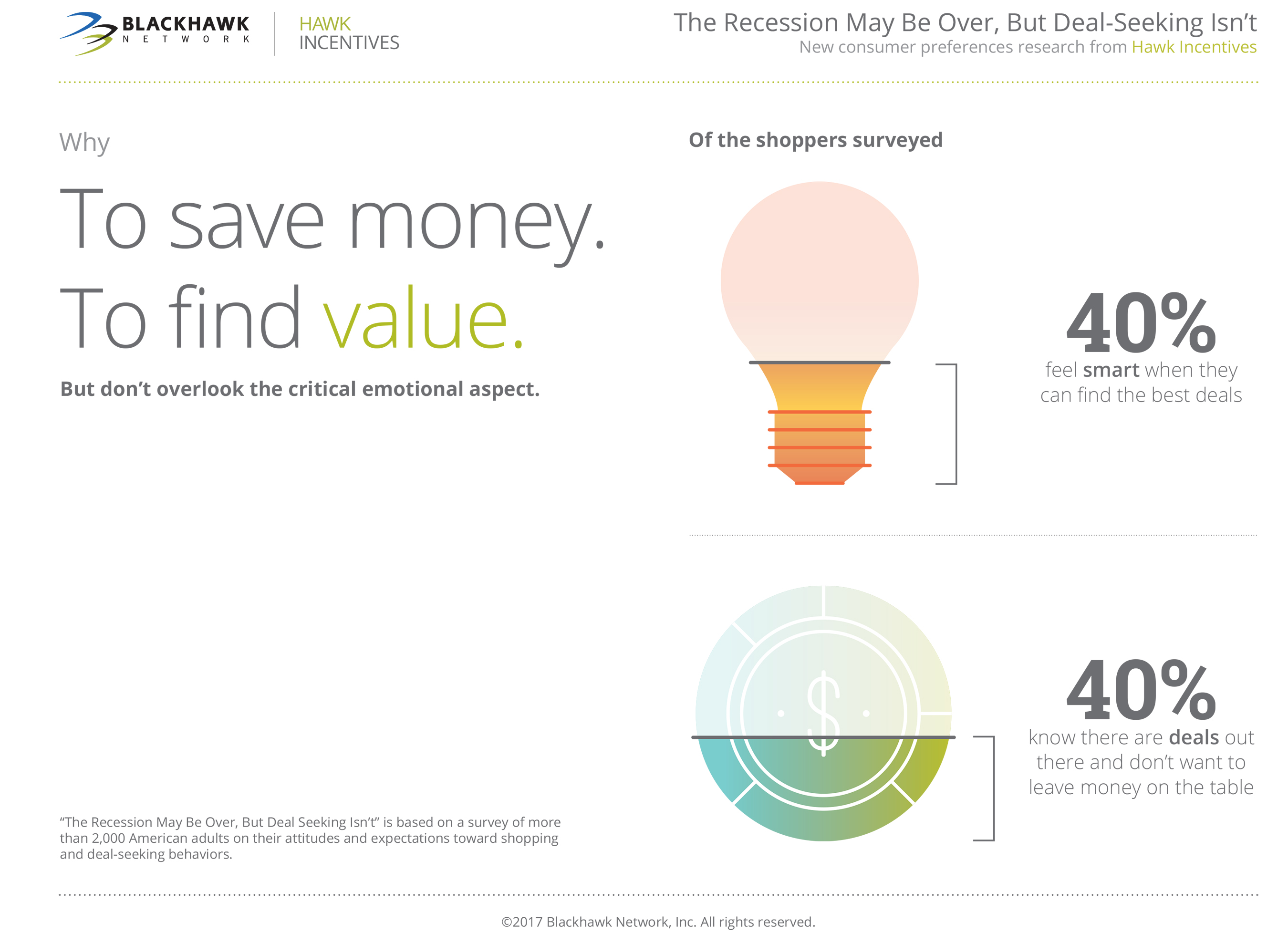 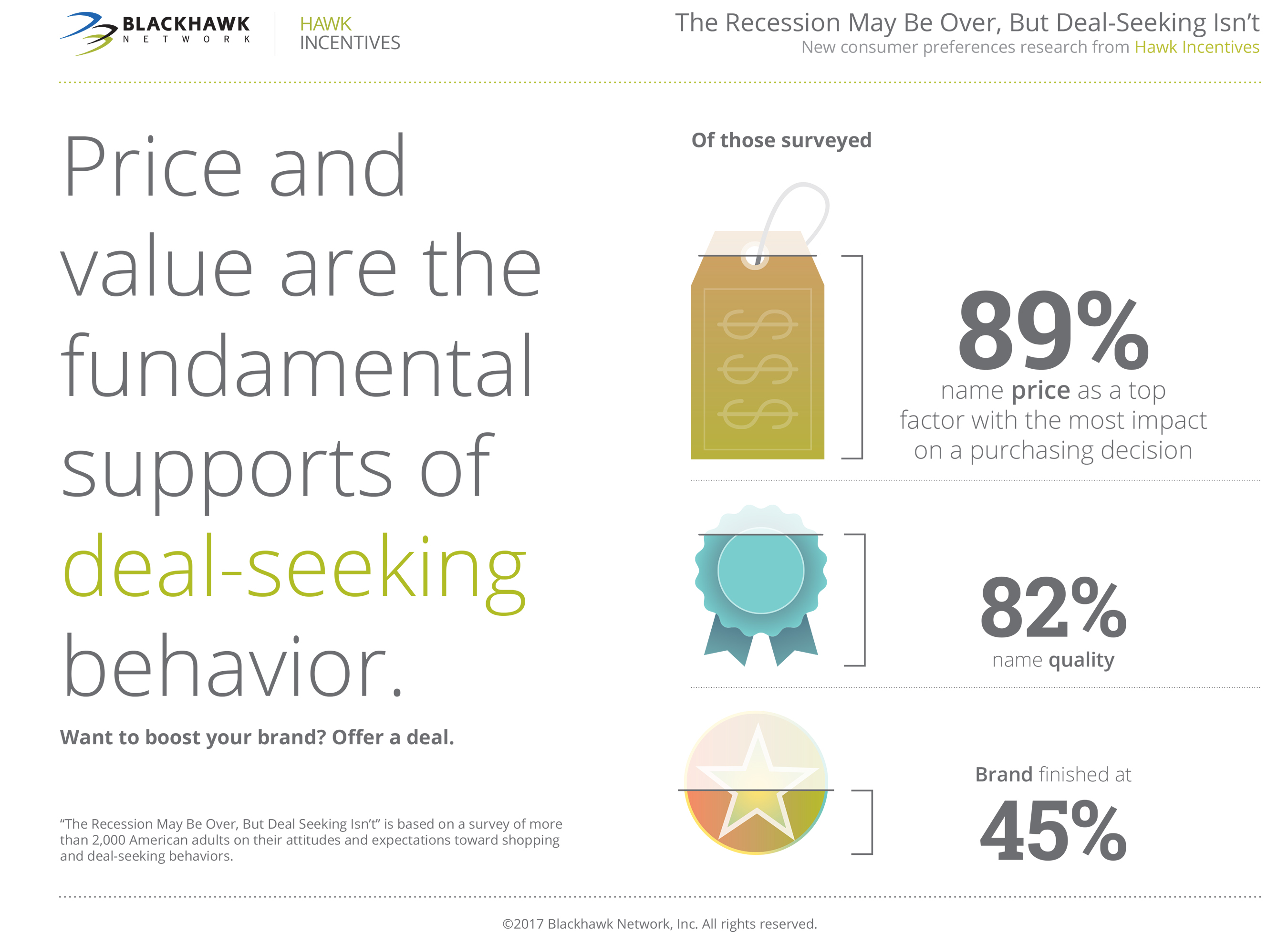 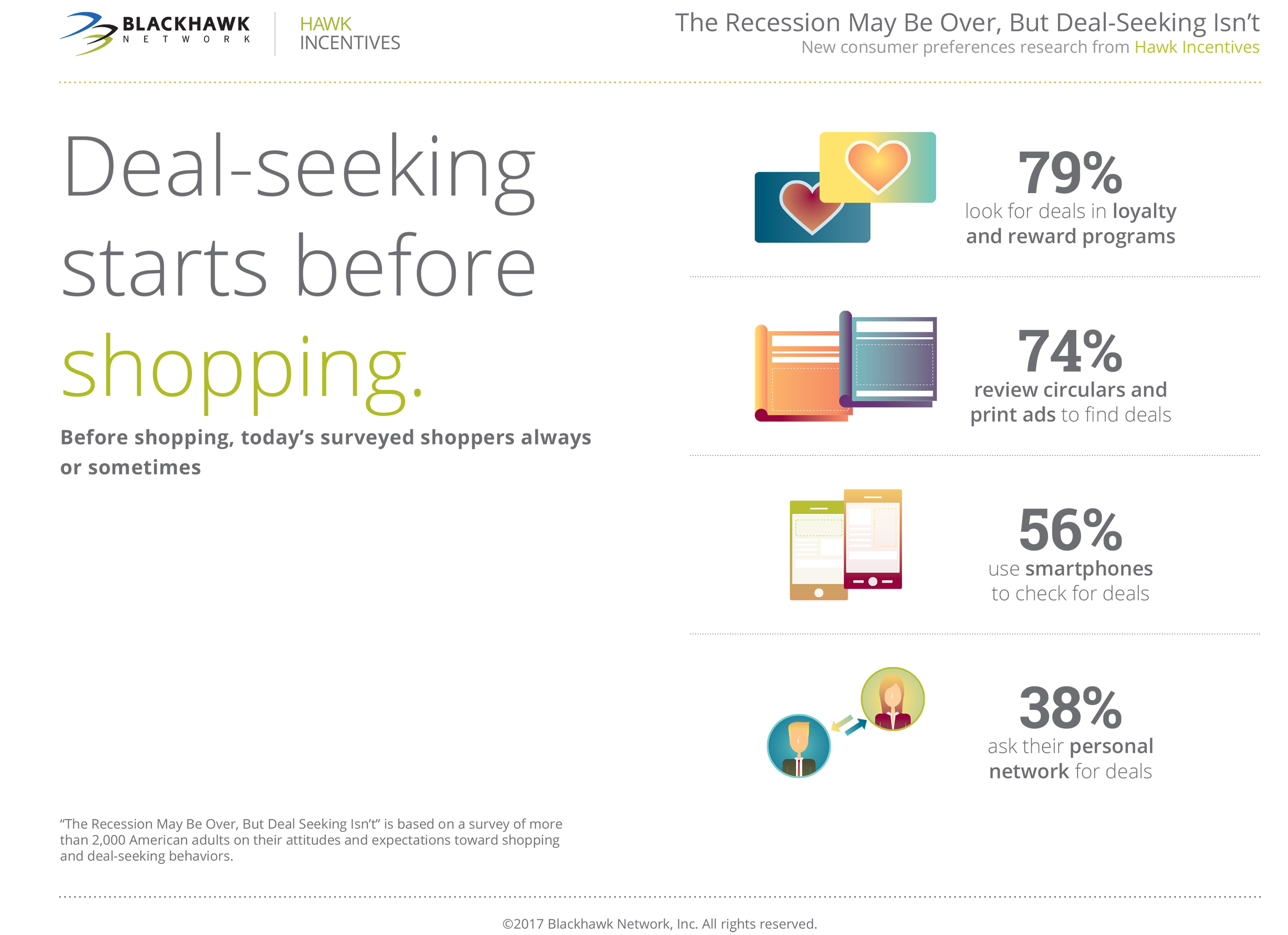 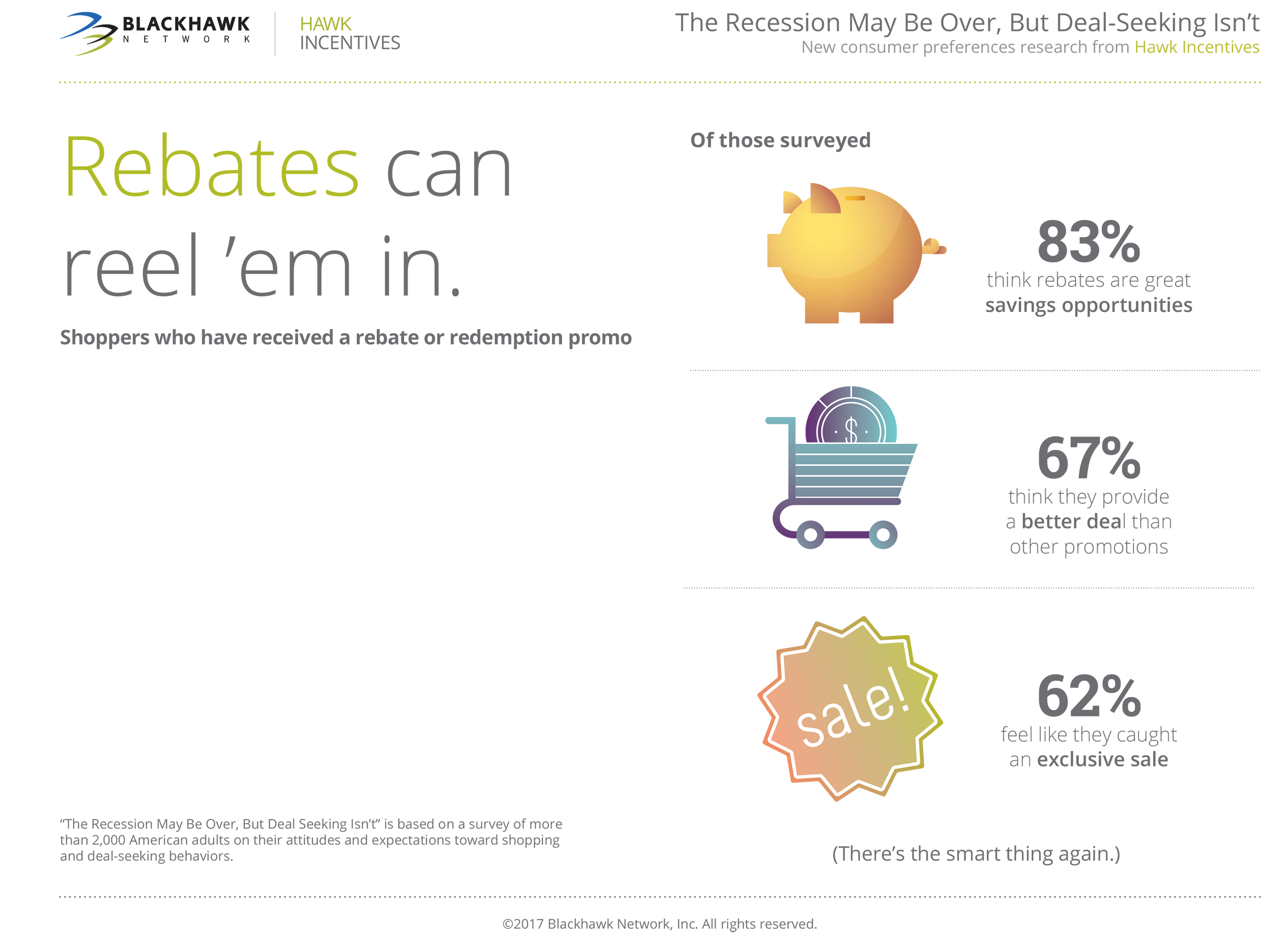 The findings were published in an ebook, "The Recession May Be Over, But Deal Seeking Isn't" and were based on a survey of more than 2,000 American adults on their attitudes and expectations toward shopping and deal-seeking behaviors.

Key findings from the survey include:

"Smartphones and instant access to deals via thumb swipes and mouse clicks have perpetuated deal-seeking behavior, and shoppers now have an emotional and habitual propensity to stretch their dollars and maximize their purchase value," said Theresa McEndree, Vice President of Marketing, Hawk Incentives. "Our research finds that consumers are going after the best deals with a vengeance, and deal seeking doesn't seem to stem from necessity. Retailers wanting to engage existing and prospective customers can offer deals such as rebates to help meet consumers' expectations for receiving the best deal while also collecting data to help promote future purchases and boost sales."

About Hawk IncentivesHawk Incentives, a Blackhawk Network business, delivers incentive programs that build relationships with easy-to-use platforms, global rewards and comprehensive service and support. Our solutions include consumer, sales, channel and employee incentive programs. With a focus on access, ease, rewards and speed, we help create an improved incentives experience that helps our clients grow their results. For more information, please visit hawkincentives.com.

Hawk Incentives, headquartered in Lewisville, Texas, is a division of Blackhawk Network.