The 1.8-mile extension of the City of Brownsville's Historic Battlefield Trail—funded by a $2 million grant from the Valley Baptist Legacy Foundation—is the first phase in a plan to connect Brownsville with Los Fresnos by trail and is the first among six catalyst projects designed to accelerate completion of the Caracara Trails—a 428-mile regional network of multiuse trails, U.S. Bicycling Routes and paddling trails. The development of the trail network is expected to generate a 22% increase in physical activity and an annual health-care cost savings of as much as $12.3 million. Construction of the trail network is expected to deliver a total economic impact of more than $173 million.

"When we hosted the groundbreaking for the Battlefield Trail Extension in January, we knew that the public health and economic benefits of the region's trails would be infinite for decades, but we had no idea that it would serve so much critical purpose in the short-term as the region and country works to stay healthy in a pandemic," said Rose M.Z. Gowen, M.D., Brownsville city commissioner and a board member of RTC. "The trail extension is a significant step forward in building a sustainable future in Cameron County that will position our city and our region as a leader in tourism based on a strong economy that is driven by ensuring the health of the local residents and community."

At the private ribbon-cutting ceremony, which was streamed live on Facebook so that people across Cameron County could participate, RTC, the City of Brownsville and the Palo Alto Battlefield—joined by the Valley Baptist Legacy Foundation, the City of Los Fresnos, cdcb, the Rio Grande Valley Metropolitan Planning Organization and UTHealth—outlined the opportunities that the completion of this trail segment moves forward. This includes immediate next steps with the Brownsville to Los Fresnos Connect project, a 2.5-mile trail project funded by a federal Transportation Alternatives grant, and the 1.1-mile Los Fresnos Hike and Bike Trail, funded by the Legacy Foundation and a Texas Parks and Wildlife Department grant.

The 428-mile Caracara Trails network is an RTC TrailNation™ project that is being developed in partnership with the Legacy Foundation; UTHealth; the cities of Brownsville, Harlingen, Combes, Los Fresnos, Los Indios, Port Isabel, Rio Hondo, San Benito and South Padre Island; the towns of Laguna Vista and Rancho Viejo; and other nonprofits and public agencies. The Caracara Trails will ultimately connect the Lower Rio Grande Valley by trail.

Learn more about the Caracara Trails and the Lower Rio Grande Active Plan at  caracaratrails.org.

Rails-to-Trails Conservancy is the nation's largest trails organization—with a grassroots community more than 1 million strong—dedicated to connecting people and communities by creating a nationwide network of public trails, many from former rail lines. RTC's TrailNation™ projects are designed to prove what is possible nationwide when trails are connected into seamless networks. Connect with RTC at railstotrails.org and @railstotrails on Facebook, Twitter and Instagram.

The City of Brownsville Today Brownsville is the largest city in the Rio Grande Valley with a population near greater than 185,000. It covers nearly 150 square miles and has some 350 miles of paved streets. With an assessed valuation of more than $7.5 billion, the city has nearly quadrupled its wealth in the past 15 years. Brownsville is proud of our past and annually hosts thousands of tourists who not only take in the history, but the climate and proximity to Mexico as well. Follow the City of Brownsville at cob.us and Facebook. 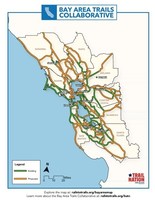