SHANGHAI, July 9, 2018 /PRNewswire/ -- In the spirit of the new epoch of the public blockchain, the HNB project has been launched. Based on a public chain, HNB, aka Hashnet BitEco, provides a decentralized platform for people to work and exchange their products or services without the fear of theft, thereby establishing and developing a promising and diverse real economy. 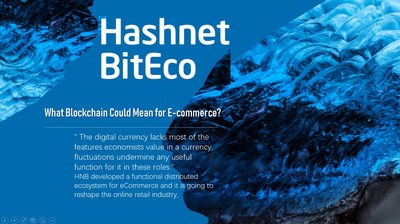 At its debut at the first "Blockchain Hundred People Lecture" in Shanghai, China, on June 22nd, HNB introduced the next generation of decentralized economic model. Compared to other economic models, HNB demonstrates a brand new model which dedicatedly supports real economy. HNB has a unique community governance framework - HNB DAO - and a dual-token system to fulfill the most significant meaning of blockchain to support the development of real economy.

As one of HNB's business partners, Honey, the world's largest hand-painted IP platform, has been closely working with HNB. With more than 100,000 artists and 30 million users, Honey helps users paint cartoon portraits using internet technology. Despite its success, Honey has a number of pain points, such as the lack of an effective copyright protection system for hand painting, especially digital products. With Honey becoming more and more successful, its legal expense would dramatically increase due to more competitors becoming threats to its IP. By migrating into the HNB community, backed by blockchain technologies, Honey reduced the costs and protected its IP. Furthermore, armed with the HNB incentive and governance mechanisms, producers and buyers are more loyal to the Honey community.

The HNB economic model was developed and implemented by a global elite team, which consists of experts from the US, Canada and China. The team members are top tier professionals in blockchain, economics, sociology, finance and business operations.

HNB (Hashnet BitEco) is aiming to design a Blockchain based decentralized economic operation mechanism for a closed-loop economic entity. HNB believes that transparent and properly implemented economic incentives will motivate participants to be both active and behavioral in the economic entity. When participants can earn incentives throughout different ways to contribute to this automated entity, it will strengthen the participation and creativity of participants. In return, the entity will be more dynamic and reach a certain scale. A global self-development HNB economic entity is supported by the open and vigorous governance mechanism, mixed with business partners, a large number of customers, and the latest technologies. Based on the next generation of blockchain technology, the HNB team is confident and committed to growing its business entity into one of the largest decentralized economic communities in the world.