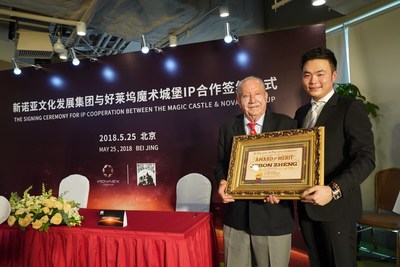 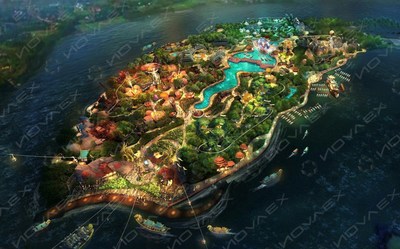 The NOVAEX GROUP that is partnering with The Magic Castle is an emerging innovative group enterprise newly established and focusing on cultural industry development. Its offline internet integrated resort community brand -- "The Circle" has become a popular topic on internet for its bold and innovative design ideas. This signing between NOVAEX and "world first class" magic IP -- The Magic Castle means more "possibilities" are going to be created for "The Circle" resort community as supported by the power and resources of The Magic Castle Hollywood.

The Magic Castle: The reality version of "Hogwarts"

08 in the Franklin Avenue of Hollywood, L.A. This is a place where world top magicians and the most miraculous "magic" gather.

Years ago, "Harry Potter" became popular around the world. The magic world in the books fascinate many readers. But most people don't know, there is the real "Hogwarts" in reality world -- The Magic Castle. It's a place full of wisdom, sacred and mysterious feelings. There are antiques over a century old, literature and historic documents about people's exploration to magic mystery.

With the halo of the top IP of the magic, NOVAEX is going to build a reality version of "magic world" -- "The Circle". It's an offline integrated internet resort community where tourists from around the world can come to China to experience magic things such as vanishing roller coaster, Ferris Wheel floating on water, world top magic shows like in the film "Now you see me", five-star hotel crossing time and space… "Magic things" can happen in everywhere of "The Circle" resort. Tourists can be immersed in the charm, surprise and delight of magic.

The cooperation between "The Circle" project and The Magic Castle is not limited to traditional magic show. People are going to experience special effects like in sci-fi films in reality. For example, magic scenes and unbelievable experience like floating people, dragon in the air, monsters attacking the city, vanishing large buildings are going to be designed, produced and presented by "The Circle" project team of NOVAEX.

Before signing with The Magic Castle, NOVAEX GROUP has made huge investment to build an elite team of top talents in technology, entertainment, game, design and education industries from China and other countries. Today, with the support of The Magic Castle, NOVAEX is going to present a more impressive "The Circle" offline internet integrated resort community featured in magic, illusion, big special effects, etc.

Besides, NOVAEX is going to build "The Magic School". World top magician teams and Chinese professional education teams are jointly researching and developing the education system for children and teenagers. Magic makes people feel more real than special effects of films, because the essence of magic is science, technology and design. In "The Magic School", magic can be applied to direct attention to physics, mathematics, chemistry and other subjects; attract children to love knowledge, learn to create; and inspire children's intelligence and gifts. Children can learn to observe every detail of the life and become more confident. This is a creative education form different from any education system of the world.

In "The Circle" resort community, the initiatory education and knowledge training for kids can be accompanied by family members. Kids will love to learn because it's interesting. The whole family members can also enjoy their vacation time together. In the modern busy urban life, the creative education in "The Circle" can perfectly blend with family relation and provide a unique vacation experience.

Building the concentric circles of online and offline: bringing emotions back to reality

The film "Ready Player One" popular in April bears some similarities with "The Circle" project and generates heated discussion on internet about "The Circle". Its shocking large visual special effects and operation, the "OinO" blending between the virtual and reality world has surprised netizens.

Actually, the idea of blending online is offline is based on the insight on future development trend of China. It also highly matches the Party and government's direction of "building the concentric circles of online and offline". In a country with number of netizens exceeding 0.77 billion, an important subject that we need to think about the next internet age is how to use the advantages and resources of internet and creative contents to realize the synchronization of online and offline.

In the age of internet and mobile network, people are becoming more and more "obsessed" in the internet world. Gamers and those who indulge themselves in mobile phones ignore the face-to-face communication with their family and friends. It's a strange situation that many people didn't notice: people tend to stay at home and meet others less because of convenient information.

Jeson Zheng, CEO of NOVAEX GROUP said, the eternal values of NOVAEX GROUP is to help people recover the bonds of emotional connection. The reason he proposed "Connecting and blending the virtual and the reality world" is because people are more and more indifferent to emotional connection in reality as they are immersed in the internet and technology world. Just like what Spielberg told us in the film "Ready Player One": No matter how impressive the game world is, it cannot replace the real emotional world.

The offline internet integrated resort community "The Circle" is born out of this kind of values. It is not only about games. After 7 years of conceiving, design, plan, adding, subtracting, restarting, optimizing and reforming, the project elite team has finally made "The Circle" model that is almost perfect now.

Technology and experience are together: leading the new mode of global entertainment resort

In "The Circle", smart technology such as VR, AR, MR, 3D and hologram projection technology are applied to create games and entertainment items that can surprise even the guru gamers; "The Circle" also has 5-star level service to provide a kind of resort experience integrating recreation, catering, natural scenery, luxury, shopping and relaxation for visitors of all age groups; "The Circle" also include kids' land and "magic" initiatory education to attract all family members.

Tourists can bring anyone to "The Circle" resort, not only family members, lovers, friends, colleges, classmates. You can also invite those internet friends who play game with you everyday but you've never met face to face, enjoy the excitement of battling shoulder to shoulder. You can also bring kids with you for a marvelous vacation, who you are too busy to look after. "The Circle" is going to become a future integrated resort suitable for all user groups. NOVAEX will integrate the most cutting-edge technology and innovative service to provide the kind of resort, recreation, entertainment and education experience that users have never enjoyed before.

After signing with The Magic Castle, the NOVAEX "The Circle" project team has more power. "The Circle" resort community is going to be a resort full of miracles everywhere. The cultural resource cooperation of China can also bring new opportunities for the industrial ecology.

"The Circle" is planned to be launched in 2020. It is going to lead the new entertainment and resort mode of current world through a series of diversified creative experience of game, e-sports, recreation, entertainment and education. The friendship between China and USA is also going to move to a new stage for cultural exchange.