WASHINGTON, Dec. 17, 2019 /PRNewswire/ -- Judge Charles F. Lettow of the Federal Court of Claims issued an official ruling today in favor of homeowners suing the Army Corps of Engineers for damage to their property located behind the Addicks and Barker dams in Houston, Texas during and after Hurricane Harvey (Case 1:17-cv-09001-CFL, Sub-Master Docket No. 17-9001L, United States Court of Federal Claims). Judge Lettow's ruling applies to thirteen "test properties" located behind the federal government's structure. 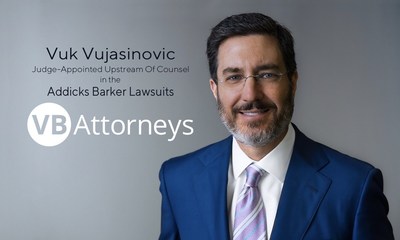 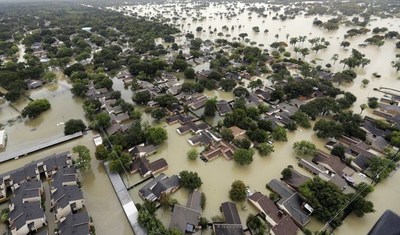 Vuk Vujasinovic of VB Attorneys, who is part of the court-appointed lead team that took the case to trial and won, stated: "People living in the flood pools behind these dams sacrificed their homes to save the heart of Houston, and we are extremely pleased the judge agreed with us that they are entitled to compensation under the 5th Amendment to our constitution." Click here to learn more HurricaneHarveyLawsuitHelp.com.

The homeowners alleged the two dams stopped water that would otherwise have flowed from the project's location 17 miles west of downtown Houston, eastward into West Houston neighborhoods, Houston's central business district, and the industrial ship channel. The homeowners alleged the water backed up until it flooded over the thirteen test properties and over 10,000 homes and businesses located behind the dams.

The homeowners claimed the government's construction and operation of the Addicks and Barker project constituted a "taking" under the Fifth Amendment to the U.S. Constitution, entitling them to compensation.

The government alleged Hurricane Harvey was a very large storm that it could not foresee when it built the dams in the 1940s, and denied owing compensation to any homeowners.

Judge Lettow held a 2-week trial in Houston, Texas, which concluded on May 17, 2019. Over 30 witnesses were called to testify, including property owners, experts in hydrology, meteorology, and real estate valuation, representatives of the Army Corps of Engineers, as well as officials with Harris County and Fort Bend County. The trial included an excursion with the Judge to personally view the entire Addicks and Barker project.

In his ruling, Judge Lettow held that the federal government's construction and operation of the Addicks and Barker project was a "taking" under the 5th Amendment, entitling the homeowners to compensation. "The court finds that the government's actions relating to the Addicks and Barker Dams and the attendant flooding of plaintiffs' properties constituted a taking of a flowage easement under the Fifth Amendment.  Thus, the court finds defendant liable."

Mr. Vujasinovic anticipates a second phase of litigation for the thirteen test properties to determine the amount of compensation owed to each. Collective damages for the over 10,000 flooded properties are estimated to exceed $1 Billion.

According to Mr. Vujasinovic, "this trial victory will be instrumental in our efforts to obtain fair compensation for all our clients whose property was damaged or destroyed due to the Addicks and Barker project. We look forward to finishing this fight to enforce our clients' constitutional property rights."

About VB Attorneys Based in Houston, Texas, VB Attorneys handles cases throughout the country. To learn more about the firm, visit HurricaneHarveyLawsuitHelp.com and VBAttorneys.com, or call 888.695.6993.