ANAHEIM, Calif., July 13, 2017 /PRNewswire/ -- Attendees at this year's Disney D23 Expo: Ultimate Fan Event will get to enjoy Minnie's polka dots in a whole new way when Honda unveils its one-of-a-kind 2018 Honda Odyssey minivan in Anaheim. Inspired by the magic of Disney and the iconic character Minnie Mouse, Honda has created the MINNIE VAN for display at the 2017 D23 Expo: (https://youtu.be/eFNlHybYDWg). The MINNIE VAN is a one-of-a-kind, pink-polka dot design inspired 2018 Honda Odyssey minivan celebrating Honda's partnership with Disney-ABC and the "Disney Unlock the Magic Sweepstakes": www.Disney.com/unlockthemagic. 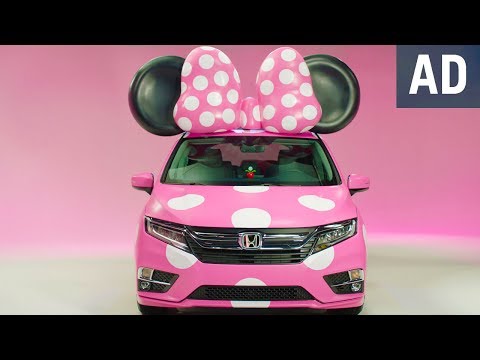 The sweepstakes and exclusive Mickey and the Roadster Racers custom content piece will air on Disney Channel and Disney Junior with special appearances by Disney characters and the 2018 Honda Odyssey minivan.

"The all-new Odyssey was developed for modern families offering high-tech features, flexible seating and new styling, all aimed at keeping everyone in the family happy," said Susie Rossick, Assistant Vice President of Honda Marketing. "In creating the MINNIE VAN that will be on display at the D23 Expo, we're proud to partner with Disney-ABC and be inspired by the style of the most fashionable gal around – Minnie Mouse."

The MINNIE VAN is a unique collaboration between Honda and Disney-ABC to create a one-of-a-kind minivan inspired by Minnie Mouse; a truly custom creation that everyone in the family will love getting to see. For this exclusive display, one all-new Honda Odyssey was transformed through a pink-polka dot design inspired by Minnie's iconic style, including her oversized bow and highly recognizable ears perched atop the vehicle.

The MINNIE VAN will be on display for fans July 14-16 at the D23 Expo: The Ultimate Disney Fan Event (https://d23.com/d23-expo/) in Anaheim, Calif. The MINNIE VAN will be a part of the "Minnie's Style: The Fashion House of Minnie Mouse" display presented by the all-new Odyssey, showcasing a selection of Minnie's iconic dresses and accessories from throughout the years. Attendees may register at the Honda display to have their photo taken with the MINNIE VAN, and receive a special keepsake. The MINNIE VAN will be for display only and will not be for sale.

To introduce the 2018 Honda Odyssey to families across America, Honda's partnership with Disney-ABC also features the "Disney Unlock the Magic Sweepstakes," with one lucky winner receiving a grand prize vacation to Disneyland® Resort, plus an all-new 2018 Honda Odyssey. The campaign includes exclusive content that will feature the Odyssey minivan alongside Mickey Mouse, his pals and their personalized transforming vehicles from Disney Junior's hit animated series Mickey and the Roadster Racers.

The Honda Odyssey has been the best-selling minivan in America for the past seven years. The all-new 2018 Honda Odyssey continues its evolution to meet the needs of changing American families, raising the bar for performance, cabin quietness, family-friendly interior space, comfort and connectivity in the minivan segment. The new Odyssey has a more powerful engine, advanced new transmission and extensive body redesign that combine to deliver class-leading performance and cabin quietness. The all-new Odyssey provides the ultimate in family flexibility and connectivity with available new Magic Slide™ second row seating, 4G LTE Wi-Fi, CabinWatch™ and CabinTalk™ technologies, and Honda Sensing® technology, now standard on EX and above trims.

The Odyssey was developed by Honda R&D Americas in Ohio and California, and is produced exclusively at Honda's Lincoln, Alabama, auto and engine plant, alongside the Pilot and Ridgeline, using domestic and globally sourced parts.

About HondaHonda offers a full line of reliable, fuel-efficient and fun-to-drive vehicles with advanced safety technologies sold through over 1,000 independent U.S. Honda dealers. The Honda lineup includes the Fit, Civic, Accord and Clarity Series of passenger cars, along with the HR-V, CR-V and Pilot sport/utility vehicles, the Ridgeline pickup and the Odyssey minivan.

Honda has been producing automobiles in America for 34 years and currently operates 19 major manufacturing facilities in North America. In 2016, more than 95 percent of all Honda vehicles sold in the U.S. were made in North America, using domestic and globally sourced parts.