SAN FRANCISCO, Sept. 16, 2017 /PRNewswire-USNewswire/ -- Hundreds of hemophilia advocates and survivors came together at the National AIDS Memorial to dedicate the Hemophilia Memorial Circle, a beautifully designed permanent feature built to forever honor all the lives lost in the hemophilia community to AIDS. 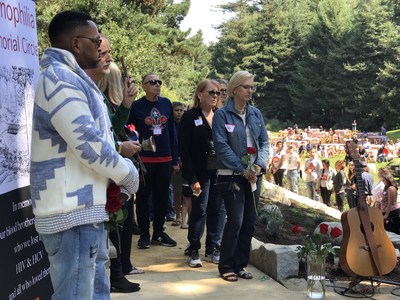 During a touching dedication ceremony, the names of the first loved ones whose names will appear in the Hemophilia Memorial Circle were read aloud and red roses were placed in the memorial in their honor. The names include family members, friends, supporters and loved ones in the Hemophilia community who lost their lives to AIDS. Each name will be inscribed in the memorial over the next month and included as part of World AIDS Day ceremonies on December 1st.

The Hemophilia Memorial Circle consists of a new stone circle and surrounding landscape with benches inscribed with the names of those in the hemophilia community who have died from AIDS.  It also pays tribute to the courage and activism of those who worked tirelessly on behalf of the hemophilia community to ensure America's blood supply is safe and that the tragedy they lived through never happens again.

"The story of AIDS is a story of darkness, and a story of light -- of hope, healing, and gratitude.  One of these stories is that of the hemophilia community, which nearly thirty years ago suffered through the loss of thousands of lives," said John Cunningham, Executive Director of the National AIDS Memorial.  "Each name inscribed here will tell a story of a person who was loved, and who was gone too soon.  Telling their stories we help future generations understand the past and use those lessons to shape a better tomorrow."

Hemophilia is a genetic condition that prevents a person's blood from clotting.  Common sites of bleeding are muscles and internal joints and organs, including the brain, which can cause injury and death.

Cries for help were met with silence from drug corporations and the federal government. People with the disease were left to fight this fight on their own, and they have served as the guardians of the nation's blood supply ever since.

"Were it not for the strength of so many in both the hemophilia and HIV/AIDS communities who stood up during the worst of times, the breakthroughs we see today in HIV research, prevention, and treatment would not have happened," said Kimberly Haugstad, President and CEO of the Hemophilia Federation of America.  "This memorial will serve as a permanent reminder of the lives that were lost and will pay tribute to the bravery and activism of a community that has suffered so dearly."

This year marks nearly thirty years since the Ryan White Comprehensive AIDS Resources Emergency (CARE) Act was signed into law, creating the most extensive federal program that provides services exclusively to people living with HIV.  Ryan White, a person with hemophilia whose story captivated our nation and the world, never lived to see passage of the new law, but his bravery, courage and heart will never be forgotten.  His mother, Jeanne White-Ginder, a prominent activist and supporter of both the Hemophilia and HIV/AIDS Communities, was a strong advocate for the new memorial.

"For decades, I have worked side-by-side with brave and dedicated people to tell Ryan's story and stories of those like him," White-Ginder said. "The construction of this memorial – inside the National AIDS Memorial, which has already brought hope to so many for decades – is a long overdue acknowledgment of those in the Hemophilia community who lost their lives so tragically."

The completion of the Hemophilia Memorial Circle at the National AIDS Memorial forever brings the hemophilia and gay communities together, bound by their common stories of fear, prejudice, loss and hope.

"The tragedy that struck this community is one that cannot be forgotten," said Val Bias, CEO of the National Hemophilia Foundation. "It is our duty to find a way to provide a place for people to remember those who lost their lives, and this memorial does just that. We are honored to be able to partner with organizations that share this mission."