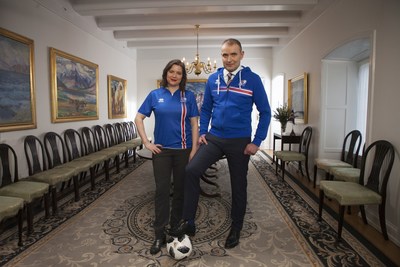 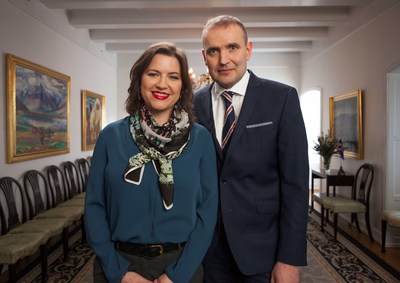 With 100 days until their first ever World Cup match on 16 June, Iceland has kicked off the celebration with a special message delivered by the President and the First Lady. They have invited the world to share in the nation's excitement and anticipation by joining Team Iceland, a digital hub for Iceland supporters designed to celebrate all things Icelandic.

Iceland's participation in the World Cup is uncharted territory, as with a population of only 340,000 they are by far the smallest nation ever to have made it into the tournament. The second smallest nation to qualify this year is Uruguay with 3.4 million people. In the spirit of inclusivity, Team Iceland gives the whole world the chance to support the island nation as they take their place on the biggest stage in sport.

In the invite film, President Guðni Th. Jóhannesson and First Lady Eliza Reid demonstrate their football skills, whilst referencing Iceland's immense pride in having qualified. President Jóhannesson said: "Win or lose, there is always the excitement of being part of something big, even when you are small." First Lady Ms. Reid added: "Come along for the celebration, everyone is welcome no matter what you're a fan of, what you believe in, or where you live, there is a place for you on our team."

Upon joining Team Iceland fans will receive a personalised digital jersey with their own squad number and their 'Icelandic' name. Icelanders' surnames are made up of the first name of their father or mother, combined with 'dóttir' for daughter and 'son' for son. For example, a woman named Emily with a father whose name is Peter would be Emily Petersdóttir. Everyone who joins "Team Iceland" will also have the chance to win a trip to Iceland.

For more information on Team Iceland and to sign up, visit: inspiredbyiceland.com/team-iceland and follow the conversation on social media at #TeamIceland

Inspired by Iceland is a joint marketing initiative for Iceland and is managed by Promote Iceland in a close cooperation with the government, tourism, trade and other stakeholders in Iceland.