LOS ANGELES, March 21, 2017 /PRNewswire/ -- It's Morphin' Time. IGN Entertainment and Lionsgate announced today that they will partner to live stream "POWER RANGERS Red Carpet Live Stream Presented By IGN," the official red carpet show for the film's US premiere on Wednesday, March 22 from 9:15-10:15 pm ET (6:15-7:15 pm PT). The world premiere event will be live streamed by IGN via Facebook LIVE, YouTube, and IGN.com. 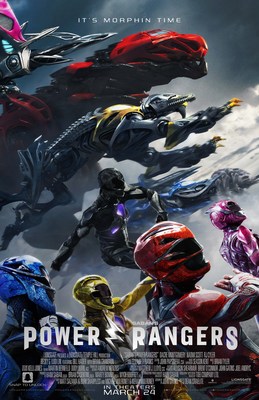 The one-hour show, produced by IGN, in association with Lionsgate, will stream live from Mann Village Theater in Los Angeles. Hosted by Tiffany Smith and IGN's very own Terri Schwartz and Joshua Yehl, the live red carpet experience will feature exclusive interviews with talent and celebrities, offering Power Ranger fans a front row seat to the excitement of the highly anticipated premiere first-hand.

Dacre Montgomery, Naomi Scott, RJ Cyler, Ludi Lin, Becky G. and other special guests are expected to be in attendance. Plus Bill Hader and Elizabeth Banks will also be stopping by to answer questions, taken directly from IGN's Facebook, enabling fans to participate in the red carpet in real time.

"IGN's collaboration with Lionsgate on Facebook LIVE is a great way for Power Rangers fans all over the world to experience the mega red carpet event first hand. Both IGN and the Power Rangers have been a dominant force since the 90's, so it's only appropriate that we come together on the biggest stage of them all - a Hollywood premiere," said Wade Beckett, SVP of Video at IGN Entertainment.

Stay connected and part of the fun by using hashtag #PowerRangersMovie. Catch all the excitement live from the red carpet at www.facebook.com/ign, www.youtube.com/ign and www.IGN.com.

Established in 1996, IGN is operated by digital media company Ziff Davis, LLC, a subsidiary of j2 Global, Inc. IGN is headquartered in San Francisco, with offices in Los Angeles, New York, Sydney and London. IGN content is localized in 25 languages and 114 countries and hosted on websites and native applications on mobile, connected TV, and Xbox and PlayStation platforms. For more information, visit www.IGN.com and follow @IGN on Twitter, Facebook, and YouTube.

One of the largest independent television businesses in the world, Lionsgate's slate of premium quality series encompasses nearly 90 shows on more than 40 different networks. These include the ground-breaking Orange is the New Black, the fan favorite Nashville, the syndication success The Wendy Williams Show, the hit drama The Royals, the acclaimed Casual, the breakout success Greenleaf and hit STARZ series including Outlander, Black Sails, Survivor's Remorse and Power, the second highest-rated premium pay television series of 2016.

Lionsgate's home entertainment business is an industry leader in box office-to-DVD and box office-to-VOD revenue conversion rates. Lionsgate handles a prestigious and prolific library of more than 16,000 motion picture and television titles that is an important source of recurring revenue and serves as a foundation for the growth of the Company's core businesses. The Lionsgate, Summit Entertainment and Starz brands are synonymous with original, daring, quality entertainment in markets around the world. www.lionsgate.com