NEW YORK, March 14, 2021 /PRNewswire/ -- A new generation of Chinese moviegoers flocked to Pandora this weekend, as IMAX Corporation (NYSE: IMAX) delivered $6.2 million in box office with the re-release of James Cameron's sci-fi epic "Avatar." Remarkably, IMAX theaters captured 30% of the film's weekend box office, despite accounting for only 1% of screens in the market. The strong performance helped "Avatar" regain its crown as the highest grossing theatrical release of all time. IMAX has now earned a lifetime box office of $249.5 million with the groundbreaking film, which remains the highest grossing IMAX film of all time as well. 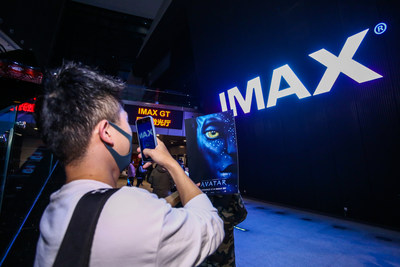 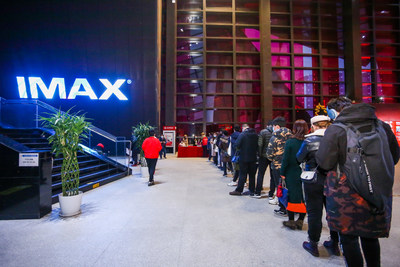 "A big screen sized thank you to IMAX for their contribution to the success of 'Avatar' at the box office. We know that we can always rely on IMAX to offer audiences quality premium cinema experiences," said "Avatar" producer Jon Landau.

"'Avatar' changed everything for IMAX — catapulting our brand into the stratosphere and putting us on the map in China — and we're grateful to help James, Jon, and this watershed film further cement their place in cinematic history," said Rich Gelfond, CEO of IMAX. "Yet again, Chinese moviegoers are demonstrating the pent-up demand for theatrical blockbusters that awaits cinemas around the world as they reopen, and IMAX continues help lead the recovery of the global movie business."

The 2010 IMAX 3D release of "Avatar" in China was a phenomenon, earning $24 million on only 14 IMAX screens — a per screen average of $1.7 million — and playing to round-the-clock sold out shows. The film began IMAX's ascent to become one of the most recognized entertainment brands in China. The following year, IMAX signed a 75-theater deal with Wanda — at the time the company's biggest international theater deal ever — and established IMAX China as its own wholly owned subsidiary of the company. Today, China is IMAX's biggest market in terms of theaters with more than 700, and the market accounts for approximately one-third of IMAX's annual global box office.

With this weekend's re-release, "Avatar" reclaimed the box office crown it relinquished to "Avengers: Endgame" in 2019. IMAX holds a piece of the storied history of both films. "Avengers: Endgame" continues to hold the record for the biggest opening weekend of any IMAX film ever with $91.5 million worldwide, and was the second Hollywood film ever to be shot entirely with IMAX cameras.

The second and third installments of the "Avatar" saga are currently slated for December of 2022 and 2024, respectively.

IMAX, an innovator in entertainment technology, combines proprietary software, architecture and equipment to create experiences that take you beyond the edge of your seat to a world you've never imagined. Top filmmakers and studios are utilizing IMAX theaters to connect with audiences in extraordinary ways, and, as such, IMAX's network is among the most important and successful theatrical distribution platforms for major event films around the globe.

IMAX is headquartered in New York, Toronto, and Los Angeles, with additional offices in London, Dublin, Tokyo, and Shanghai. As of December 31, 2020, there were 1,650 IMAX theater systems (1,562 commercial multiplexes, 12 commercial destinations, 76 institutional) operating in 84 countries and territories. Shares of IMAX China Holding, Inc., a subsidiary of IMAX Corporation, trade on the Hong Kong Stock Exchange under the stock code "1970."

IMAX®, IMAX® Dome, IMAX® 3D, IMAX® 3D Dome, Experience It In IMAX®, The IMAX Experience®, An IMAX Experience®, An IMAX 3D Experience®, IMAX DMR®, DMR®, IMAX nXos® and Films to the Fullest®, are trademarks and trade names of the Company or its subsidiaries that are registered or otherwise protected under laws of various jurisdictions. More information about the Company can be found at www.imax.com. You may also connect with IMAX on Instagram (https://www.instagram.com/imax), Facebook (www.facebook.com/imax), Twitter (www.twitter.com/imax) and YouTube (www.youtube.com/imaxmovies).

IMAX Corporation to Present at the Credit Suisse 23rd Annual...

Darren Throop Elected Chairman of IMAX Board of Directors,...