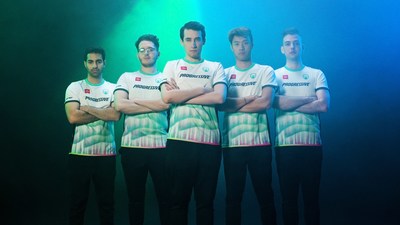 As part of the announcement, Immortals Progressive revealed its "Northern Lights" themed jerseys and branding that pay homage to the northern lights and Great Lakes Region, home for both Progressive Insurance and Immortals.

"Our new branding previews how we intend to integrate visual representations of the Great Lakes Region throughout our merchandise, content and other collateral," said Brad Peters, Immortals Director of Brand. "This jersey design demonstrates how we are breaking the traditional mold of what fans expect to see from esports teams visually." The new jersey design is available for purchase now at store.immortals.gg.

In addition, Immortals Progressive will bring a number of entertaining and interactive initiatives to the gaming community in 2022, including:

Immortals Progressive looks forward to connecting the Great Lakes Region through community-driven activations, custom gaming content, streams and giveaways, all with the support of a Fortune 500 company.

"We look forward to continuing our relationship with Immortals as the team's LCS entitlement sponsor," said Jay VanAntwerp, Media Business Leader at Progressive. "We're excited to work with Immortals throughout the upcoming season to bring fans and members of the gaming community fun and engaging content from the players as well as activations and unique opportunities to interact with the team."

The LCS Lock In tournament starts today, January 13th. Viewers can tune in to watch Immortals Progressive compete in their first match Saturday, January 15th on LCS Twitch and YouTube.

About Immortals Immortals is a U.S.-based professional esports organization representing the Great Lakes Region, with a mission to serve as the region's gateway to all things gaming. Immortals is dedicated to using gaming as a connective force linking its players, influencers and creators, fans, staff, and the broader gaming community. Immortals competes across multiple premier esports titles, including League of Legends (LCS), VALORANT, and Wild Rift.

About Progressive Progressive Insurance℠ makes it easy to understand, buy and use car insurance, home insurance, and other protection needs. Progressive offers choices so consumers can reach us whenever, wherever and however it's most convenient—online at progressive.com, by phone at 1-800-PROGRESSIVE, on a mobile device or in-person with a local agent.

Founded in 1937, Progressive continues its long history of offering shopping tools and services that save customers time and money, like Name Your Price®, Snapshot®, and HomeQuote Explorer®.

Fetch.ai partners up with esports organization Immortals for...