MINNEAPOLIS, Sept. 11, 2018 /PRNewswire/ -- In response to the U.S. recycling crisis, 501(c)(3) nonprofit organization Recycle Across America® (RAA) has launched the celebrity-led "Let's recycle right!®" ("Let's®") Campaign, which is the largest recycling education campaign in U.S. history. Many of the TV/billboard/print/social media ads features simple tips for proper recycling and introduces the society-wide standardized labeling solution for recycling bins, which makes it possible for people everywhere to recycle right. 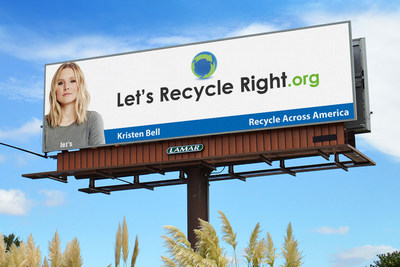 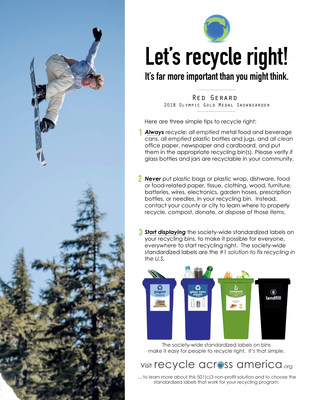 "We are beyond grateful to have an ever-growing collective group of influencers, media companies, municipalities, political leaders, brand leaders, and bin manufacturers unite around this critical education campaign and recycling solution at a time when it is most needed," said Mitch Hedlund, Founder of Recycle Across America.  "Just as standardized road signs make it easy for people to drive safely, standardized labels on bins make it easy for people to recycle right. This isn't an awareness campaign; this is a 'solutions' campaign -- together we will solve the crisis."

"Let's" ads are currently playing on many ABC, CBS, FOX, and NBC stations in forty of the largest U.S. cities; and are appearing on Lamar Advertising Company's digital billboards coast-to-coast; are displayed in international airports; are featured in national and regional magazines and newspapers; and are seen in other public spaces throughout the country.

RAA launched the campaign in response to the U.S. recycling crisis. In the state of California alone, 1,000 recycling centers and processing plants have recently shut down, and stories are frequently published about collected recyclables being sent to landfills due to contamination. The chronic confusion at the bin has led people to throw millions of tons of garbage in recycling bins, and that contamination cripples the economics of recycling.  China, which used to purchase a third of U.S. recycling, enacted the Green Fence Policy in 2013 warning the U.S. to clean up the recyclables. Without seeing improvements with the contamination levels, in January 2018 China announced the Green Sword Policy banning the purchase of most U.S. recyclables due to the contamination.

The public confusion and apathy about recycling, stems from a lack of national education about proper recycling and a lack of standardized labels on recycling bins, carts and dumpsters. Therefore, in addition to creating the most extensive recycling campaign in U.S. history, nonprofit RAA created the only standardized labels for society-wide use on recycling bins to make it easy for the public to begin recycling right wherever they might be. To date, there are nearly nine-million standardized labels displayed on bins throughout the U.S. that have proven to double or triple recycling levels and significantly reduce or eliminate contamination. In turn, the standardized labels help reduce the cost of processing recyclables and allow many manufacturers to have access to high-quality recycled commodities at competitive prices, thereby preventing the depletion of finite natural resources.

About RAA: Recycle Across America (RAA) is a 501(c)(3) non-profit organization, which has developed the first and only society-wide standardized labeling system for recycling bins and the nationwide education campaign for proper recycling. RAA and the standardized labels have been identified as a world-changing solution by Ashoka Global Innovators for the Public and referred to as "one of the most important environmental fixes taking root today" by the New York Times. For more information, visit www.recycleacrossamerica.org or contact [email protected]