PURCHASE, N.Y., June 19, 2019 /PRNewswire/ -- In the technological feat of the century, Doritos has completed production on "Incognito Doritos," state-of-the-art, traditional-looking Doritos bags that covertly transform into an official replica suit from Spider-Man: Far From Home, in theaters on July 2, 2019. The Spidey-suit allows Peter Parker to be a hero, even far from home, completely undetected with his Spider-Man identity kept safe. And luckily for select fans, an official replica suit is now available for a limited time and a noble cause. 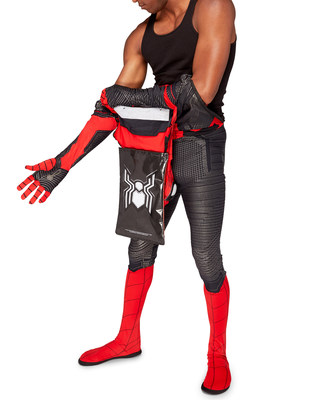 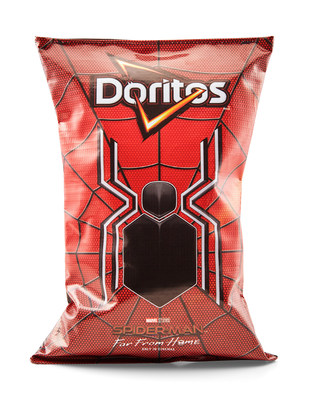 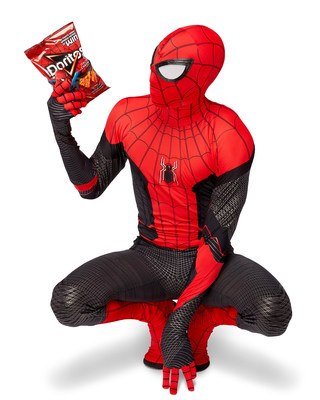 Through a global promotional partnership with Columbia Pictures' upcoming summer release Spider-Man: Far From Home, in association with Marvel Studios, the "revolutionary" Incognito Doritos "chip bags" conceal the full-size Spider-Man suit… but not just any suit. It is the official replica of the "Black & Red" edition made by Spider-Man's official suit maker Shafton Inc. that will make its debut in the upcoming film, marking the first time fans can get their hands on one.

"Teaming up with Spider-Man, we knew we had to deliver something epic and iconic to fans around the world," said Leslie Vesper, senior director of marketing, Frito-Lay North America. "So we thought in a humorous way we could help Peter Parker keep his identity secret. We also know that there's a strong overlap between our core Doritos consumers and Spider-Man fans, so we wanted to create something fun that truly brings both worlds together and for a good cause."

"We're excited to collaborate with Doritos on this innovative campaign in support of Spider-Man: Far From Home," said Jeffrey Godsick, EVP, Brand Strategy and Global Partnerships, Sony Pictures Motion Picture Group. "This unique promotional partnership perfectly ties in with the themes of the film, and we are excited to see the never-been-done before replica of the Spider-Man suit camouflaged in a Doritos bag. No doubt this will get people talking."

Incognito Doritos will only be available via a social giveaway sweepstakes sponsored by Doritos, and one special-edition version will be auctioned off on eBay to benefit Capes4Heroes, which creates personalized superhero capes for kids with disabilities or illnesses or who just need to feel empowered. Doritos will also make a separate donation.

Starting now, fans can tweet @Doritos to tell us what super power Doritos gives them using #IncognitoDoritos and #entry…before they disappear on June 30. And starting on June 20 and continuing through June 27, fans can also join in on the superhero action by bidding in the eBay auction at IncognitoDoritos.com

Incognito Doritos are part of the brand's overall partnership with the upcoming film Spider-Man: Far From Home. The collaboration also includes specially marked bags of Doritos that contain codes that can be entered for an opportunity to win unique Spider-Man: Far From Home inspired prizes, including a grand prize European trip for two. Consumers can enter on-pack codes at doritos.com and participate in the "Spidey-Sense Challenge," an online game where users playing as Spider-Man will run a series of web shooter training courses in various cities. Fans can purchase the custom coded bags in-store or on Amazon.com/Doritos while supplies last.

Doritos believes there's boldness in everyone. We champion those who are true to themselves, who live life fully engaged and take bold action by stepping outside of their comfort zone and pushing the limits. Doritos is one of the many brands that makes up Frito-Lay North America, the $16 billion convenient foods business unit of PepsiCo (NYSE: PEP), which is headquartered in Purchase, NY. Learn more about Frito-Lay at the corporate website, http://www.fritolay.com/, the Snack Chat blog, http://www.snacks.com/ and on Twitter at http://www.twitter.com/fritolay.

About Spider-Man™: Far From Home

Following the events of Avengers: Endgame, Spider-Man must step up to take on new threats in a world that has changed forever.

PepsiCo products are enjoyed by consumers more than one billion times a day in more than 200 countries and territories around the world. PepsiCo generated more than $64 billion in net revenue in 2018, driven by a complementary food and beverage portfolio that includes Frito-Lay, Gatorade, Pepsi-Cola, Quaker and Tropicana. PepsiCo's product portfolio includes a wide range of enjoyable foods and beverages, including 22 brands that generate more than $1 billion each in estimated annual retail sales.Guiding PepsiCo is our vision to Be the Global Leader in Convenient Foods and Beverages by Winning with Purpose. "Winning with Purpose" reflects our ambition to win sustainably in the marketplace and embed purpose into all aspects of the business.  For more information, visit www.pepsico.com

Capes4Heroes makes personalized superhero capes for kids with disabilities, kids with life threatening illnesses, and kids who just need to feel empowered.  These capes give deserving kids an extra boost of strength and courage and make them feel like the superheroes they truly are!

Founded in 2008 by Barbara Casados, Capes4Heroes is headquartered in Danville, California. To date, Capes4Heroes has personalized and delivered over 25,000 capes to children all over the United States. With support from partners and sponsors, heroes have received their capes at superhero parties, camps, Children's hospitals and through their online nomination process.  Their goal is to distribute capes to 5,000 more children during their 2019 East Coast Cape Crusade.  For additional information, visit https://capes4heroes.com/

Put It on Our Tab: Lay's Celebrates New Flavor Icons Chips with...