WASHINGTON, Oct. 2, 2020 /PRNewswire/ -- Former Mongolian Ambassador to the United Nations and architect of Mongolia's nuclear-weapon-free status initiative Jargalsaikhany Enkhsaikhan told an international forum on September 30 that both the U.S. and North Korea need to adopt bold conceptual approaches to resolve security threats on the Korean peninsula, including deterrence that excludes nuclear weapons and a commitment to denuclearizing the Korean peninsula as part of a Northeast Asian nuclear-weapons-free zone (NEA-NWFZ). He said an international, credible mini Marshall Plan might be a win-win solution for the Korean peninsula as well as for overall regional security and development.

Addressing security experts from South Korea, China, Japan, Great Britain, Finland, Russia, India, Mongolia and the United States in a virtual conference, "Free and Unified Korea: Northeast Asia Regional Collaboration on Denuclearization and Economic Integration," Enkhsaikhan said the NEA-NWFZ treaty could also have legally binding provisions on providing economic assistance to the DPRK. "The U.S. president talks about the tremendous potential of the DPRK's economic development and prosperity, while other states of the region believe that the DPRK, if allowed, can also play an important economic role in the region."

Nuclear-weapon-free zones are legally binding international agreements that ensure total absence of nuclear weapons in the region that are verified by credible international monitoring. Globally there are five established NWFZs—in Latin America and the Caribbean, the South Pacific, Southeast Asia, the entire African continent and Central Asia—which include some 50 percent of the world's land area, 119 states and almost 2 billion inhabitants.

Forum participants discussed prospects of adapting the NWFZ concept for the Korean peninsula and the Northeast Asian region that would include security guarantees from Russia, China and the USA, as well as binding commitments to non-nuclear deterrence and development of a "post-Cold War framework" of regional cooperation.

"For the last seventy years, the resumption of hostilities on the Korean peninsula has been of concern to the international community," said Dr. Robert Gallucci, chief U.S. negotiator during the North Korean nuclear crisis of 1994 and former Assistant Secretary of State for Political Military Affairs. "Simply put, the expansion of [NWFZs] to additional countries reduces the salience of nuclear weapons as an element in the calculations of national security."

Mongolia is recognized internationally as a nuclear-weapon-free state, maintains friendly relations with all the states of the region, including both Koreas and "can be an impartial 'good office' provider or mediator in efforts to resolve the security issues on the Korean peninsula," Enkhsaikhan said.

A concurrent roundtable, "Regional Economic Integration Strategies," examined prospects for economic development in Northeast Asia, with the case study of Mongolia's transition from a centralized command economy to a free market, with trade ties throughout the region. "As governments and large multilateral institutions move slowly," said John Dickson, president of the World Trade Partnership, "it is imperative that contingency plans be considered to enable a peaceful, mutually productive framework for the economic integration of the Korean peninsula."

Reminding participants of the forum's unique premise that denuclearization and economic development should be pursued along with Korean unification, Dr. Jai Ryu, founder and chairman of the One Korea Foundation, said "Our efforts for denuclearization, peninsula unification, and regional economic integration are not three separate goals, but three interconnected and interdependent facets of the same vision."

The forum concluded with an agreement by the organizers to create an ongoing regional secretariat for the NEA-NWFZ discussion with the goal of contributing to a free and unified Korea.

The meeting was the second in a series of expert forums in 2020, sponsored by the Global Peace Foundation, Action for Korea United, One Korea Foundation, and Blue Banner. The forums advocate peaceful, principled Korean unification based on the Korean Dream approach, drawing on the ideals, shared values and history of the Korean people to build a free and unified Korea that advances regional peace and security, human rights, family reunification and shared prosperity for all Koreans. 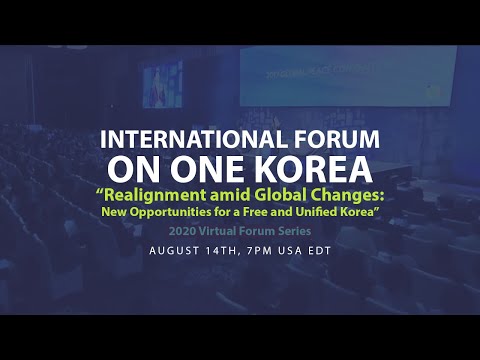