COLUMBUS, Ohio, Aug. 18, 2020 /PRNewswire/ -- Physna, Inc., the world leader in geometric deep-learning technology, is excited to announce the launch of Thangs: The world's first geometric search engine and most powerful online community for 3D model creators. With more than one million indexed 3D models at launch and many more to come in the next few months, Thangs puts groundbreaking tools and machine-learning capabilities in the hands of designers, engineers and enthusiasts around the globe. 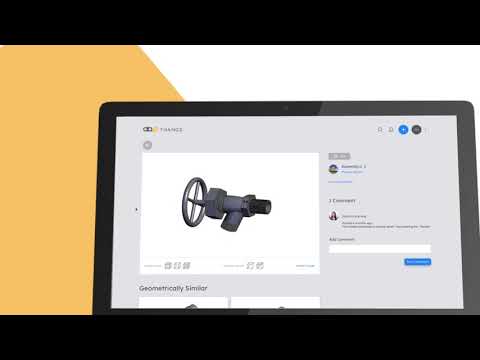 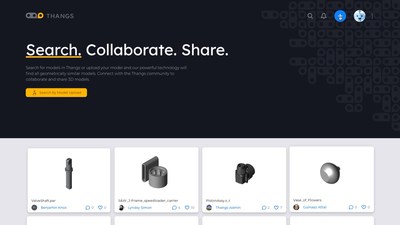 Thangs gives creators access to powerful search, collaboration and AI-powered predictive tools that have never been available before in the world of 3D data. Free to join and easy to use, Thangs democratizes the world of 3D models and creates a global index of the physical world.

Thangs: Google + GitHub for the World of 3D Models

Engineers, industrial designers and 3D-printing enthusiasts understand the massive challenges of working with 3D data. The most important aspects of their work must be done manually, and the lack of efficient and intuitive tools often makes them far less productive than software developers.

Thangs fixes that. It brings industry-leading search and collaboration capabilities to the world of 3D data, giving hardware developers access to the same vital resources that have long been available to software developers. What Google has done in indexing 2D data such as text and images, Thangs is doing for physical objects and 3D models. Thangs allows users to find parts based on their (potential) relationship to other parts. For instance, simply by uploading a 3D model, a Thangs user can find where that part could be used, or what parts are available from suppliers that fit that model as components.

Thangs also comes with smart collaboration tools that can do for the world of 3D models what GitHub did for software development.

Thangs finds 3D models quickly, identifies them accurately, understands the relationships between models and components and makes your own 3D models smarter. In addition to its powerful search capabilities, Thangs introduces collaboration tools that 3D model creators have long been waiting for, such as automated version control and easy collaboration on team projects.

The Thangs platform will grow its capabilities – and its launch index of one million 3D model files – over time based on community feedback and the continuous evolution of its core technology. Here's what the Thangs community can expect right away.

Search for models and see how they are related: Thangs' powerful geometric search engine allows users to find models with a wide range of search terms based on the object's physical properties, measurements and features. Thangs also identifies similarities and differences between 3D models, recognizes how parts fit within complex assemblies and makes accurate predictions about each object's function, cost, materials, performance, compliance and more.

Find compatible parts and suppliers: The ability to find compatible parts with ease allows creators to go from design phase to build phase faster than ever before. Thangs analyzes each 3D model's physical properties and shows how it relates to other 3D models online, including parts that fit within its assembly and partial designs. It even makes predictions that reveal related part suppliers.

Unleash your productivity: Thangs gives you more time to create by eliminating time-consuming tasks and duplicate designs. You'll never have to track files down manually, and you'll never have to recreate designs due to hard-to-find files. Thangs finds similar and duplicate 3D models (even parts or shapes within models), automates version control and eases collaboration with others around the world.

Collaborate in a much smarter way: Thangs makes it easier than ever to join forces with others and work on models together. Shared folders automate version control and bring clarity to complex collaborations. Thangs users can comment on 3D models, "like" models to save them to their profile and receive notifications when other users interact with their own designs.

Make meaningful connections: Thangs is accessible to non-engineers, but it also creates valuable connections between professionals and independent creators. After uploading your 3D models, Thangs creates a smart portfolio of your work accessible from your user profile. Just as GitHub has become a resume in the world of software, Thangs is your resume in the world of 3D models.

Thangs is powered by Physna's industry-leading geometric deep-learning engine, which comprehends the "physical DNA" of objects in ways that have never been possible before. By understanding the physical structure of 3D models across a variety of file types, Thangs reveals in-depth information included within 3D designs, including complex assemblies and parts within parts.

Thangs is on track to become the world's largest 3D database in under a year, as it indexes public models from around the world automatically. Every 3D model uploaded to Thangs also helps its core technology understand the physical world even better.

With Thangs, creators can go from the design phase to the build phase faster than ever. Search results are fast and accurate. Deeper data about each 3D model is revealed. Identifying similarities and differences between 3D models is automatic, making version control easier than ever. And creators have access to convenient collaboration tools that they've never had before.

"Thangs is Physna's first open product, but it uses some of the same powerful technology at the core of our enterprise offerings," said Paul Powers, CEO of Physna. "Our enterprise product is widely recognized as the technological leader in 3D search and analysis, and we're democratizing some of its capabilities through Thangs. This product is built to be powerful enough for a leading aerospace CAD engineer, yet simple enough for literally anyone to use. Reality is three-dimensional, and it's time for the digital age to be as well. Thangs gives everyone not only access to 3D data, but utility from it as well using some of the most cutting-edge technology available today."