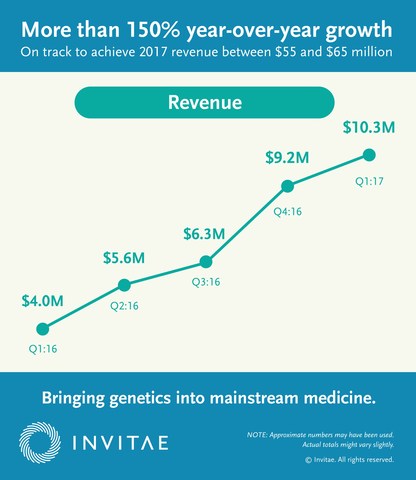 Cash used in operating activities in the first quarter 2017 amounted to $22.0 million, as compared to $24.0 million in 2016. At March 31, 2017, cash, cash equivalents, restricted cash, and marketable securities totaled $101.5 million, $4.2 million more than the comparable amount as of December 31, 2016, reflecting net proceeds of approximately $39.7 million, resulting from a loan agreement secured in March 2017 and the subsequent extinguishment of $12.1 million in previously outstanding debt.

"We are winning the race to scale in our industry," said Sean George, chief executive officer of Invitae. "By providing more affordable genetic testing, we are opening up access for patients to address a wide spectrum of health issues, from rare diseases to common cancers, fueling increased utilization of our expanding platform. Now in-network with a majority of major payers, we expect the rise in demand for Invitae's services in the first quarter will translate into significant revenue growth throughout the remainder of the year."

Webinar and Conference Call Details: Management will host a webinar and conference call today at 4:30 p.m. Eastern / 1:30 p.m. Pacific to discuss financial results and recent developments. The dial-in numbers for the conference call are (877) 201-0168 for domestic callers and (647) 788-4901 for international callers, and the reservation number for both is 11040513.

About InvitaeInvitae Corporation's (NYSE: NVTA) mission is to bring comprehensive genetic information into mainstream medical practice to improve the quality of healthcare for billions of people. Invitae's goal is to aggregate most of the world's genetic tests into a single service with higher quality, faster turnaround time, and lower price than many single-gene and panel tests today. The company currently provides a diagnostic service comprising approximately 1,500 genes for a variety of genetic disorders associated with oncology, cardiology, neurology, pediatrics, and other rare disease areas, as well as a clinical whole exome analysis service. Additionally, the company has created a Genome Network to connect patients, clinicians, advocacy organizations, researchers, and therapeutic developers to accelerate the understanding, diagnosis, and treatment of hereditary disease. For more information, visit our website at invitae.com.

Safe Harbor StatementsThis press release contains forward-looking statements within the meaning of the Private Securities Litigation Reform Act of 1995, including statements relating to the company's expectations regarding full-year 2017 revenue; the company's belief that it is winning the race to scale in its industry and opening up access for patients to address a wide spectrum of health issues, which is leading to increased utilization of its expanding platform; that being in-network with a majority of major payors and the rise in demand for its services in the first quarter will lead to significant revenue grow throughout the remainder of 2017; that additional payer contracts will be executed during the remainder of 2017; that exome testing can help clinicians make or confirm a diagnosis and develop an appropriate medical management plan; and that research continues to point to the broader utility of genetic information and precision of the company's services. Forward-looking statements are subject to risks and uncertainties that could cause actual results to differ materially, and reported results should not be considered as an indication of future performance. These risks and uncertainties include, but are not limited to: the company's history of losses; the company's ability to compete; the company's failure to manage growth effectively; the company's need to scale its infrastructure in advance of demand for its tests and to increase demand for its tests; the company's ability to develop and commercialize new tests and expand into new markets; the risk that the company may not obtain or maintain sufficient levels of reimbursement for its tests; the company's inability to raise additional capital on acceptable terms; risks associated with the company's ability to use rapidly changing genetic data to interpret test results accurately, consistently, and quickly; risks associated with the company's limited experience with respect to acquisitions; security breaches, loss of data and other disruptions; laws and regulations applicable to the company's business; and the other risks set forth in the company's filings with the Securities and Exchange Commission, including the risks set forth in the company's Annual Report on Form 10-K for the year ended December 31, 2016. These forward-looking statements speak only as of the date hereof, and Invitae Corporation disclaims any obligation to update these forward-looking statements.

NOTE: Invitae and the Invitae logo are trademarks of Invitae Corporation. All other trademarks and service marks are the property of their respective owners.