SAN FRANCISCO, May 9, 2018 /PRNewswire/ -- Invitae Corporation (NYSE: NVTA), one of the fastest growing genetics companies, today announced financial and operating results for the first quarter ended March 31, 2018. Based on the growing momentum in test volume and substantial revenue growth, the company is increasing its volume guidance from accessioning 250,000 samples to accessioning more than 275,000 samples in 2018. Additionally, the company is raising its revenue guidance from at least $120 million to more than $130 million in 2018. 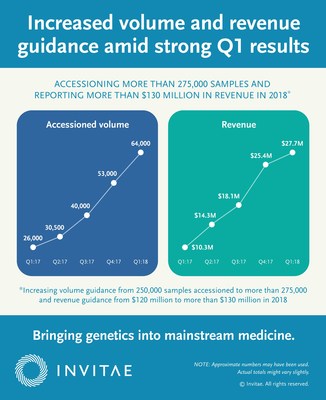 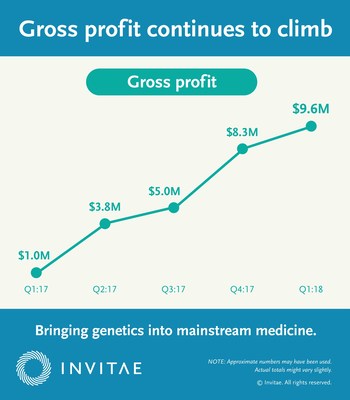 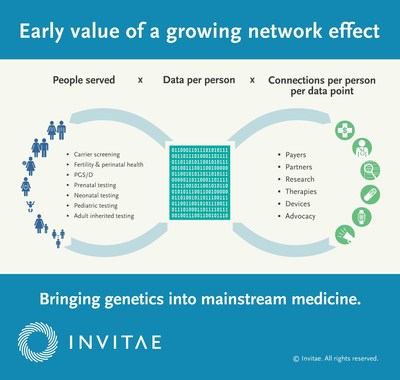 "Given the investments we've made in content and customer experience, we are now poised to become the leading provider of genetic information, as well as the partner of choice for therapeutics companies and others in the broader healthcare continuum," said Sean George, co-founder and chief executive officer of Invitae. "With the resources, team and capital we have today, we have demonstrated the capability to disrupt the genetic information landscape, and we now plan to drive operating and financial leverage across the business and meaningfully reduce our cash burn by 40 to 50% as we exit 2018."

Cash used in operating activities in the three months ended March 31, 2018 was $32.9 million, compared to $22.0 million in the same period in 2017. At March 31, 2018, cash, cash equivalents, restricted cash and marketable securities totaled $60.6 million. Subsequent to the quarter's close, Invitae raised $53.5 million in net proceeds from an equity offering and has access to $20 million additional debt, bringing total available capital to more than $130 million.

Webinar and Conference Call DetailsManagement will host a conference call and webcast today at 4:30 p.m. Eastern / 1:30 p.m. Pacific to discuss financial results and recent developments. The dial-in numbers for the conference call are (866) 393-4306 for domestic callers and (734) 385-2616 for international callers, and the reservation number for both is 9158119. Following prepared remarks, management will respond to questions from investors and analysts, subject to time limitations.

About InvitaeInvitae Corporation (NYSE: NVTA) is a genetics company whose mission is to bring comprehensive genetic information into mainstream medical practice to improve the quality of healthcare for billions of people. Invitae's goal is to aggregate most of the world's genetic tests into a single service with higher quality, faster turnaround time and lower prices.

Safe Harbor StatementThis press release contains forward-looking statements within the meaning of the Private Securities Litigation Reform Act of 1995, including statements relating to the company's future financial performance and estimated guidance for 2018, including with respect to volume and revenue; the company's belief that it is poised to become the leading provider of genetic information and partner of choice; that the company has demonstrated the capability to disrupt the genetic information landscape with its resources, team and capital; and that the company will begin to see operating and financial leverage across the business and reduced cash burn by the end of 2018. Forward-looking statements are subject to risks and uncertainties that could cause actual results to differ materially, and reported results should not be considered as an indication of future performance. These risks and uncertainties include, but are not limited to:  the company's history of losses; the company's ability to compete; the company's failure to manage growth effectively; the company's need to scale its infrastructure in advance of demand for its tests and to increase demand for its tests; the risk that the company may not obtain or maintain sufficient levels of reimbursement for its tests; the Company's failure to successfully integrate or fully realize the anticipated benefits of acquired businesses; the company's ability to use rapidly changing genetic data to interpret test results accurately and consistently; security breaches, loss of data and other disruptions; laws and regulations applicable to the company's business; and the other risks set forth in the company's filings with the Securities and Exchange Commission, including the risks set forth in the company's Annual Report on Form 10-K for the year ended December 31, 2017. These forward-looking statements speak only as of the date hereof, and Invitae Corporation disclaims any obligation to update these forward-looking statements.