BEIJING, Jan. 10, 2020 /PRNewswire/ -- iQIYI, Inc. (NASDAQ: IQ) ("iQIYI" or the "Company"), an innovative market-leading online entertainment service in China, announced that the Company has become an official partner of the 77th Annual Golden Globe Awards in China. The ceremony was held on January 6, 2020 Beijing time. iQIYI participated in the annual global entertainment event along with other top entertainment companies including Netflix, HBO, BBC, USA Network, as well as top award nominees such as Scarlett Johansson and Chris Evans. iQIYI was one of the few platforms permitted to conduct official interviews and in-depth reporting on the Golden Globes Awards. Others included NBC, E-entertainment and TNT. 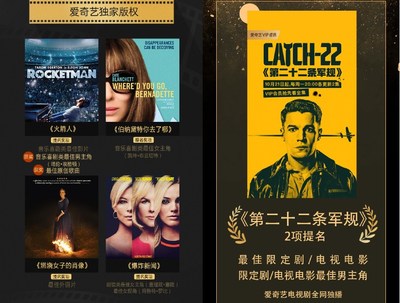 Known as the start of the award season, the Golden Globe Awards was founded in 1944 and is held once a year. It is considered as the most authoritative forward-looking award ahead of the annual Academy Awards. As the official partner and the screening platform in China, iQIYI reports on all things of Golden Globes through its in-depth reports and one-on-one talks with international celebrities including Wesley Snipes, Daniel Craig, Taron Egerton, Ramy Youssef and Nora Lum. Besides, iQIYI users were given access to a comprehensive selection of awarded films over the years.

At the same time, iQIYI launched a Golden Globes-themed page on its platform, presenting users with comprehensive information on the awards. Before that, iQIYI has secured copyrights of eight Golden Globes finalists, which include How to Train Your Dragon 3: The Hidden World, Toy Story 4, The Lion King, and five exclusive licensed content such as Bombshell, Rocketman, Where'd You Go, Bernadette, Portrait de la jeune fille en feu, and drama series Catch-22. In addition, iQIYI users can watch nearly 60 Golden Globes movies on its movie and drama series channels, including Green Book, Three Billboards Outside Ebbing, Missouri, The Shape of Water, Bohemian Rhapsody, Roma, Crouching Tiger, Hidden Dragon, as well as drama series The Handmaid's Tale, This is Us, Patrick Melrose.