BEIJING, March 19, 2021 /PRNewswire/ -- iQIYI Inc. (NASDAQ: IQ) ("iQIYI" or the "Company"), an innovative, market-leading online entertainment service in China, is pleased to announce that its DreamVerse Studio has recently released two interactive 4D virtual reality (VR) movies, Virus Crisis and The Mystery of Kunlun. With these two new movies, fans of the horror and adventure genres can experience first-hand how it feels to save the world from a biomedical crisis or raid a tomb for lost treasure. 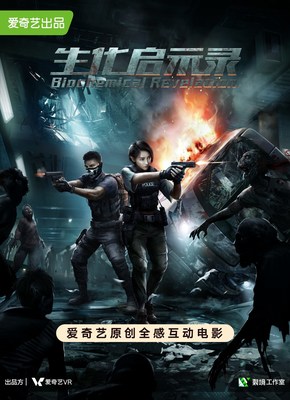 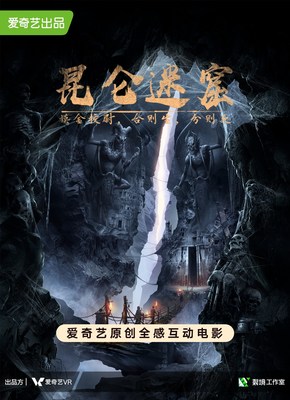 DreamVerse Studio produces full-sensory interactive movies which deliver revolutionary cinematic experiences that stimulate all five senses. Empowered by their professional, tech-centric production, highly integrated hardware, and a combination of offline and online solutions, the movies can transport viewers to a range of scenarios including an ancient jungle, a future wasteland, or a downtown shopping center.

As iQIYI's 4D entertainment studio, DreamVerse creates VR works, full-sensory technology, and other solutions to drive the evolution of the offline multi-sensory entertainment experience industry. Previously the studio has created several highly-acclaimed experiences such as The Last One Standing VR, Chinese Paladin: Sword and Fairy 4 VR, Robot Master, and Killing a Superstar. Among those, Killing a Superstar won the "Best VR Immersive Story" award in the VR Expanded Competition of the 77th Venice International Film Festival, becoming the first VR work from mainland China to win an award at an international A-list film festival. Currently, the studio's VR content is available at several VR offline experience stores in Shanghai, Beijing, and Suzhou.

Set against the backdrop of a high-risk spill that takes place in a fictional biochemical company, Biochemical Revelation tells the story of a senior inspector who encounters a major virus outbreak while transporting a virus anti-serum. The inspector must lead trainee police officers through a siege of zombies to deliver the anti-serum safely. Kunlun Caverns is a thrilling action-adventure film in the popular "tomb raider" genre about a group of raiders who must join forces to thwart an evil plan to use ancient knowledge to create an undead army.

Based on the first full-sensory interactive movie Robot Master, the studio has upgraded every facet of Biochemical Revelation and Kunlun Caverns, from production to the viewing experience. Both movies were created with triple A-level game production technology to present a visual spectacle including jaw-dropping scenes such as a tsunami of corpses, a subway packed with zombies, corpse-strewn insect caves, skyscrapers, and magnificent ancient ruins. In terms of the immersive full-sensory experience, both films are equipped with a device that allows players to experience smells such as the fresh air after rain or the aroma of tobacco when passing a non-player character lighting a cigar. Gesture recognition is used in scenes in which players must unlock a door, rescue teammates, or perform some other specific action, creating a more interactive game world.

Other highlights include new features aimed at catering to the younger consumers' needs for social networking. Both movies come with differentiated identity settings for several players who must combine their powers in order to win. In Virus Crisis, only the captain has the ability to use a light in dark scenes, so other players have to rely on the captain to repel the tide of zombies. Meanwhile, in The Mystery of Kunlun, close cooperation between players is required to solve puzzles. These new cooperative features serve the dual purpose of allowing players to become more immersed in the game world while also helping them to form close emotional ties with their teammates, meeting both of their entertainment and socializing needs.

As a pioneer in the field of VR, iQIYI has been working on building its software and hardware integrated VR ecosystem since 2016. Earlier this year, the Company announced that it had secured a multi-hundred million RMB in financing for its VR division iQIYI Intelligent, becoming the first domestic firm to have completed a Series B round of financing for VR. As noted by industry analysts, China's VR industry is currently at a new development stage where offline gaming ecosystem is driving the VR content growth, while an explosion in cross-platform content globally is expected within the next two to three years. Going forward, DreamVerse Studio will continue to lead the way for VR in China, with plans to create multi-sensory interactive works based on titles such as the Deer Squad and RichBoom later this year.