VANCOUVER, May 12, 2020 /PRNewswire/ - IsoEnergy Ltd. ("IsoEnergy" or the "Company") (TSXV: ISO;OTCQX: ISENF) is pleased to report the results of a review of the winter 2020 drilling program at the Hurricane zone.  A key highlight is the recognition of several areasxcellent potential to expand the mineralization.  Discovered in 2018 on the Larocque East property, the Hurricane zone is a recent discovery of high-grade uranium.  Larocque East is 100% owned by IsoEnergy and is located in the prolific Eastern Athabasca Basin of Saskatchewan (Figure 1). 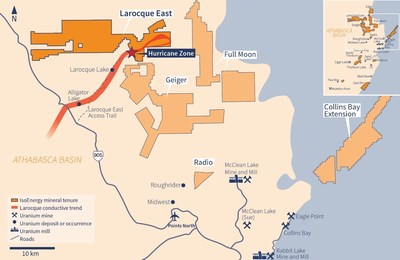 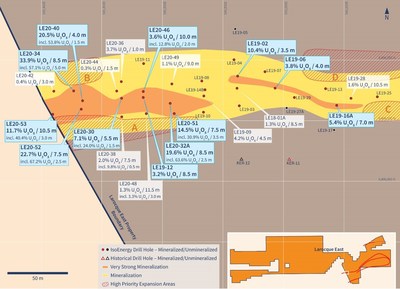 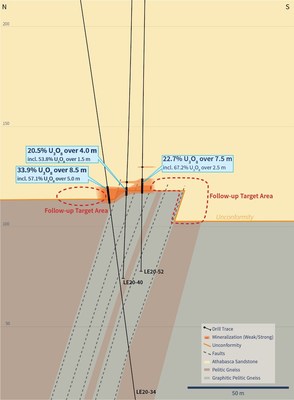 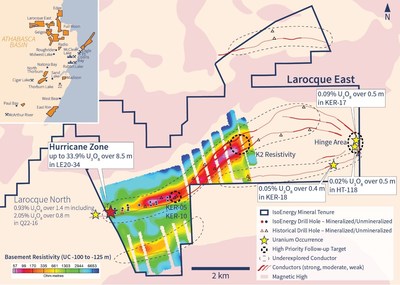 Craig Parry, Chief Executive Officer commented: "Our initial review of the winter Hurricane zone drilling results has been very positive.  Clearly, there is room for additional mineralization similar to that intersected during the recently completed program.  Given the results of the winter drill program and proximity to existing uranium mills in the area, we are going to accelerate the collection of geotechnical and hydrogeological data in order to optimize and fast-track study and development timelines.  An initial mineral resource estimate for the Hurricane zone will follow when the deposit's extents are better understood – likely sometime within the next 12 months."

Steve Blower, VP Exploration commented: "The winter drill program has confirmed that our Hurricane discovery has significant size and high-grade uranium potential.  Additionally, our exploration drilling has confirmed the fertile and prospective nature of the Larocque conductor trend and we are enthused by the exploration potential on the property to the east of Hurricane.  While the focus will now be on drilling out Hurricane, we also look forward to testing targets to the east where past drilling has intersected uranium mineralization.  We have now established a strong set of protocols that will enable us to operate at the project over the summer despite the Covid-19 pandemic and are well positioned to launch a summer drill campaign that will deliver news flow over coming months as we move towards delineating an initial Mineral Resource on Hurricane".

A program of 10,322m of core drilling in 24 drill holes was completed in March with two drills.  One drill rig concentrated on the western end of the Hurricane zone footprint, expanding the mineralization west to the property boundary.  A second drill rig began evaluating the potential for additional uranium mineralization well to the east (200m to 1,600m) of the Hurricane zone footprint.  Both of these efforts were successful.

All 14 drill holes completed at the western extension of the Hurricane zone were mineralized (Table 1).  Further, a new zone of very strong uranium mineralization characterized by very high-grade mineralization over thick intervals was intersected in several drill holes.  The best example is drill hole LE20-34, which intersected 33.9% U3O8 over 8.5m, including 57.1% U3O8 over 5.0m.  The location of the very strong mineralization relative to the rest of the zone is shown in Figure 2, along with several areas that are considered prospective for expansion of this material.  Importantly, all five of the westernmost sections are open for expansion to the north and/or to the south.  Figure 3 shows an example of this on section 4435E, where there is excellent potential for additional mineralization north of drill hole LE20-34, and also south of drill hole LE20-52.

Drilling to the east of the Hurricane zone evaluated the western portion of a 5km long basement conductive zone mapped by the 2019 DC-resistivity survey (Figure 4).  Strongly graphitic basement gneisses hosting brittle faulting were intersected in all of the widely spaced reconnaissance drill holes completed up to 1.6km east of the Hurricane zone during the winter program.  Several of these drill holes also intersected significant sandstone alteration with elevated sandstone uranium geochemistry and/or illitic sandstone.  Figure 4 shows that IsoEnergy's first pass drilling east of Hurricane has only covered the westernmost 1.4km of the 5km long DC-resistivity anomaly, which itself only covers one-third of the 15km of conductors within the Larocque trend that exists on the Larocque East property.  Further drilling east of the Hurricane zone is required.

Detailed geological and geochemical interpretations are now underway and will aid planning for a summer 2020 drilling program.  Highest priority will be given to those areas with the greatest potential for expansion of the zone of very strong mineralization.  Based on the results to date and to accelerate potential development timelines, initial geotechnical and hydrological data collection will be included in this summer's drilling program.  Once the full extent of the Hurricane zone is defined, an initial Mineral Resource estimate will follow – likely within the next 12 months.  However, the timing and amount of summer drilling may be impacted by the COVID-19 pandemic, as the safety of our work crews and our stakeholders in northern Saskatchewan is paramount.  Program plans will be announced in due course as the situation clarifies.

The Larocque East Property and the Hurricane Zone

The 100% owned Larocque East property consists of 25 mineral claims totaling 14,921ha that are not encumbered by any royalties or other interests.  Larocque East is immediately adjacent to the north end of IsoEnergy's Geiger property and is 35km northwest of Orano Canada's McClean Lake uranium mine and mill.

Along with other target areas, the Property covers a 15-kilometre-long northeast extension of the Larocque Lake conductor system; a trend of graphitic metasedimentary basement rocks that is associated with significant uranium mineralization at the Hurricane zone, and in several occurrences on Cameco Corp. and Orano Canada Inc.'s neighbouring property to the southwest of Larocque East.  The Hurricane zone was discovered in July 2018 and was followed up with 29 drill holes in 2019 and an additional 14 drill holes to date in 2020.  Dimensions are currently 575m along-strike, 40m wide, and up to 11m thick.  The zone is open for expansion along-strike to the east and on most sections.  Mineralization is polymetallic and commonly straddles the sub-Athabasca unconformity 320 m below surface.  The best intersection to date is 33.9% U3O8 over 8.5m in drill hole LE20-34.  Drilling at Cameco Corp.'s Larocque Lake zone on the neighbouring property to the southwest has returned historical intersections of up to 29.9% U3O8 over 7.0m in drill hole Q22-040.  Like the nearby Geiger property, Larocque East is located adjacent to the Wollaston-Mudjatik transition zone - a major crustal suture related to most of the uranium deposits in the eastern Athabasca Basin.  Importantly, the sandstone cover on the Property is thin, ranging between 140m and 330m in previous drilling.

The scientific and technical information contained in this news release was prepared by Andy Carmichael, P.Geo., IsoEnergy's Senior Geologist, who is a "Qualified Person" (as defined in NI 43-101 – Standards of Disclosure for Mineral Projects).  Mr. Carmichael has verified the data disclosed.  All radioactivity measurements reported herein are total gamma from an RS-125 hand-held spectrometer.  As mineralized drill holes at the Hurricane zone are oriented very steeply (-80 to -90 degrees) into a zone of mineralization that is interpreted to be horizontal, the true thickness of the intersections is expected to be greater than or equal to 90% of the core lengths.  This news release refers to properties other than those in which the Company has an interest.  Mineralization on those other properties is not necessarily indicative of mineralization on the Company's properties.  All chemical analyses are completed for the Company by SRC Geoanalytical Laboratories in Saskatoon, SK.  For additional information regarding the Company's Larocque East Project, including its quality assurance and quality control procedures, please see the Technical Report dated effective May 15, 2019, on the Company's profile at www.sedar.com.

IsoEnergy is a well-funded uranium exploration and development company with a portfolio of prospective projects in the eastern Athabasca Basin in Saskatchewan, Canada.  The Company recently discovered the high-grade Hurricane Zone of uranium mineralization on its 100% owned Larocque East property in the Eastern Athabasca Basin.  IsoEnergy is led by a Board and Management team with a track record of success in uranium exploration, development, and operations.  The Company was founded and is supported by the team at its major shareholder, NexGen Energy Ltd.

The information contained herein contains "forward-looking statements" within the meaning of the United States Private Securities Litigation Reform Act of 1995 and "forward-looking information" within the meaning of applicable Canadian securities legislation. "Forward-looking information" includes, but is not limited to, statements with respect to the activities, events or developments that the Company expects or anticipates will or may occur in the future, including, without limitation, planned exploration activities. Generally, but not always, forward-looking information and statements can be identified by the use of words such as "plans", "expects", "is expected", "budget", "scheduled", "estimates", "forecasts", "intends", "anticipates", or "believes" or the negative connotation thereof or variations of such words and phrases or state that certain actions, events or results "may", "could", "would", "might" or "will be taken", "occur" or "be achieved" or the negative connotation thereof.

Such forward-looking information and statements are based on numerous assumptions, including among others, that the results of planned exploration activities are as anticipated, the price of uranium, the anticipated cost of planned exploration activities, that general business and economic conditions will not change in a material adverse manner, that financing will be available if and when needed and on reasonable terms, that third party contractors, equipment and supplies and governmental and other approvals required to conduct the Company's planned exploration activities will be available on reasonable terms and in a timely manner. Although the assumptions made by the Company in providing forward-looking information or making forward-looking statements are considered reasonable by management at the time, there can be no assurance that such assumptions will prove to be accurate.

Forward-looking information and statements also involve known and unknown risks and uncertainties and other factors, which may cause actual events or results in future periods to differ materially from any projections of future events or results expressed or implied by such forward-looking information or statements, including, among others: negative operating cash flow and dependence on third party financing, uncertainty of additional financing, no known mineral reserves or resources, the limited operating history of the Company, the influence of a large shareholder,  alternative sources of energy and uranium prices, aboriginal title and consultation issues, reliance on key management and other personnel, actual results of exploration activities being different than anticipated, changes in exploration programs based upon results, availability of third party contractors, availability of equipment and supplies, failure of equipment to operate as anticipated; accidents, effects of weather and other natural phenomena and other risks associated with the mineral exploration industry, environmental risks, changes in laws and regulations, community relations and delays in obtaining governmental or other approvals.