Upon completion of the merger with eCobalt Solutions Inc., the Company mobilized an aggressive drilling programme at ICO in what remained of the 2019 field season. 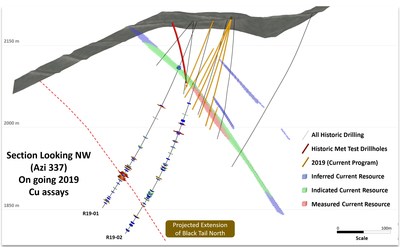 Whilst a key purpose of this drilling was to support the feasibility study ("FS") update, our exploration team wanted to explore the footwall at the RAM deposit to test a geological model identified by Jervois through detailed geological structural modelling. The Company is pleased to advise that the concept has been successfully validated, with both deep holes drilled into the footwall of the main RAM resource intercepting copper and cobalt. This type of mineralistion is analogous to the northern extension of the Blackbird mine lode known as Blacktail which was historically mined at the now closed operation adjacent to RAM.

Both deep core holes have intercepted Cu-Co mineralization which was previously undrilled and unknown. The two holes have been partially assayed for the Blacktail zone. Further samples from hole R19-02 are currently at ALS Elko labs in Nevada USA for analysis.

These two intercepts of Blacktail North confirm the exploration model and demonstrate the potential to add future mineral resources to the ICO. The deposit is open in all directions and will be thoroughly drilled in the 2020 field season once drill collar access has been established.

The results received so far are shown in Figures 1 and 2, Tables 1 and 2.

Physical drilling has now completed at the ICO, including drilling for metallurgical testwork and infill resource drilling, in addition to the exploration holes described above. Logging and sampling of core continues. Due to the importance of FS requirements for the other holes, no further exploration was undertaken of the footwall potential this season. The newly discovered Blacktail North zone will be tested from locations on the west side of the mountain to reduce drilling costs in the 2020 field season.

Jervois is excited by these initial developments. The transaction with eCobalt Solutions Inc. was predicated on the detailed due diligence of our team and confidence in ICO being ultimately capable of operating in an environmentally responsible manner at higher production rates than currently formalised via existing feasibility studies, and as permitted by the United States Forest Service. A domestic cobalt refinery within the United States will also be positively impacted by a mining operation delivering higher volumes of cobalt concentrate for a longer period.

Quality AssuranceCore samples or geochemical analysis are sent to ALS Elko Nevada, an independent and fully accredited laboratory in the USA for analysis for gold & multi-element Induction Coupled Plasma Spectroscopy. Core samples from the main Ram zone are sent to SGS Lakefield, Canada for analysis as per ALS Elko and for further metallurgical testing. Jervois also has a regimented Quality Assurance, Quality Control program where at least 10% duplicates and blanks are inserted into each sample shipment.

Competent Person's StatementThe information in this release that relates to Mineral Exploration is based on information compiled by David Selfe who is full time employee of the company and a Fellow of the Australasian Institute of Mining and Metallurgy and Dean Besserer, P.Geol. who is a consultant to the company and a member of The Association of Professional Engineers and Geoscientists of Alberta. Both David Selfe and Dean Besserer have sufficient experience which is relevant to the style of mineralization and type of deposit under consideration and to the activity which they are undertaking to qualify as a Competent Person as defined in the 2012 Edition of the 'Australasian Code for Reporting of Exploration Results, Mineral Resources and Ore Reserves'. David Selfe and Dean Besserer consent to the inclusion in the release of the matters based on their information in the form and context in which it appears.

Qualified Person's StatementThe technical content of this news release has been reviewed and approved by Dean Besserer, P.Geol., the Technical Advisor of the Company and a Qualified Person as defined by National Instrument 43-101

This news release may contain certain "Forward-Looking Statements" within the meaning of the United States Private Securities Litigation Reform Act of 1995 and applicable Canadian securities laws. When used in this news release, the words "anticipate", "believe", "estimate", "expect", "target, "plan", "forecast", "may", "schedule" and other similar words or expressions identify forward-looking statements or information. These forward-looking statements or information may relate to exploration work to be undertaken at ICO, the reliability of third party information, and certain other factors or information. Such statements represent the Company's current views with respect to future events and are necessarily based upon a number of assumptions and estimates that, while considered reasonable by the Company, are inherently subject to significant business, economic, competitive, political and social risks, contingencies and uncertainties. Many factors, both known and unknown, could cause results, performance or achievements to be materially different from the results, performance or achievements that are or may be expressed or implied by such forward-looking statements. The Company does not intend, and does not assume any obligation, to update these forward-looking statements or information to reflect changes in assumptions or changes in circumstances or any other events affections such statements and information other than as required by applicable laws, rules and regulations.