DALLAS, Dec. 10, 2019 /PRNewswire/ -- JSX, the acclaimed hop-on jet service that offers daily flights from private terminals for the cost of a commercial ticket, builds on its mission to bring joy back to the flying experience by collaborating with Prime Video's hit show – The Marvelous Mrs. Maisel – and treating twenty lucky superfans with "One Marvelous Night in Vegas" to celebrate the launch of Season 3. 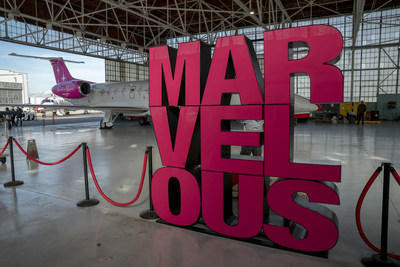 Just as Midge Maisel – the show's leading lady – takes to the skies in Season 3, on December 5, 2019, fans followed suit flying from Burbank to Las Vegas. Prior to the flight, guests had the chance for a one-of-a-kind photo opportunity in front of the JSX Maisel branded aircraft in Burbank, including exclusive access to the JSX lounge featuring Marvelous first-class service and amenities. Aboard a custom Maisel-wrapped JSX plane, guests were treated to a bespoke in-flight experience complete with a specialty Maisel cocktail, gift bags on every seat, a custom Flight Attendant pink scarf, and a curated "Maisel-style" in-flight announcement recorded for the group by Rachel Brosnahan. Once on the ground in Las Vegas, the red carpet treatment continued with an overnight stay at The Cosmopolitan of Las Vegas and an exclusive performance of VEGAS! THE SHOW, encompassing the true magic of Sin City.

"In 2016, we set out to reintroduce the simple joy of flying by launching a new air travel concept designed to make flying short distances faster, easier and more enjoyable," said Alex Wilcox, CEO of JSX. "Enhancing this, JSX is always looking for new and creative ways to surprise and delight our loyal customers. From partnering with Lisa Vanderpump and Friends to our latest collaboration with Prime Video's The Marvelous Mrs. Maisel, we love being part of the joy these icons bring to millions of fans and creating unique memorable ways to engage with each franchise."

JSX saves its customers up to an hour on each end of the trip by flying out of private terminals on spacious, comfortable 30-seat Embraer 135 aircraft while bypassing the long lines, crowds, and hassles associated with major airports. With JSX, passengers arrive at a private terminal just 20 minutes before their flight and can enjoy complimentary snacks and beverages (including cocktails while in-flight), 36 inches of legroom and up to three pieces of complimentary checked baggage. Tickets can be purchased by going to www.jsx.com.

ABOUT JSXFounded in 2016, JSX is a hop-on jet service that's faster on the ground, more comfortable in the air and competitively priced with flights starting from $89 each way. JSX flies more than 330 weekly flights and focuses on connecting highly desirable business and leisure markets within 500 miles which means customers can save up to two hours each time they fly by avoiding crowded airports and long drives. JSX offers many industry-leading features including:

JSX flights may be booked directly through www.jsx.com or through codeshare partner JetBlue on multiple online travel sites. TrueBlue members may earn points on JSX flights.

JSX's luxuriously appointed Embraer jets may also be chartered for group trips, corporate events or other travel. For a custom quote, contact 800-iFLYJSX.