Today Juventus is proud to announce a multi-year strategic global Partnership with blockchain-based fan engagement platform Socios.com and unveils plans to launch the 'Juventus Official Fan Token' to its global fan base. 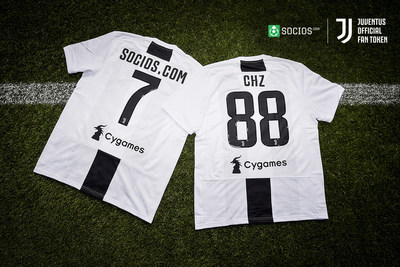 With more than 340million supporters worldwide and a global, digital fan base that exceeds 60 million across social media platforms, the launch of the Juventus Official Fan Token will evolve the Club's global fan engagement strategy and expand their global audience, in particular, bringing million of fans that are based outside of Europe closer to the real fan experience.

The tradeable Fan Token, will allow the Club's fans across the world to engage through a mobile voting and polling platform, through which the Club will ballot its fans, allowing the supporters' voice to be heard, and creating an emotional connection between the Club and its fans.

Juventus' fans will have the chance to purchase Tokens through an innovative scheme known as a Fan Token Offering (FTO) and Socios.com aim to release the Fan Token as early as Q1 2019.

Giorgio Ricci, Co-Chief Revenue Officer, Head of Global Partnerships and Corporate Revenues of Juventus says: "Juventus is glad to welcome Socios.com to our partners. At the Club we are always very careful and pro-active towards innovation and new technologies. Together with Socios.com we believe we can offer new opportunities to our worldwide fan base to engage in cutting-edge way with their favorite club."

Alexandre Dreyfus, CEO & Founder of Socios.com says: "As one of the biggest and most successful football clubs in the world, I am delighted that Juventus has chosen to work with Socios.com, and to seek the rewards that our innovative blockchain technology has to offer.

"Our long-term aim is to onboard more than 50 football clubs and we hope to inject an additional $300 million into the sports economy over the next few years. We have started at the very top, with some of the biggest names in football, and our ambition is to build the world's biggest global football community and marketplace for football fans alongside demonstrating that blockchain and cryptocurrency is the trusted technology of the mainstream."

The Juventus Official Fan Token will only be available through Socios.com, and will be tradeable against the platform's native token, $CHZ.

Socios.com helps football clubs achieve digital transformation through blockchain technology. Socios.com is powered by the chiliZ token ($CHZ), an ERC20 utility token on the Ethereum blockchain. Fan Tokens are specific to a team or a club, and are a finite, digital asset that provides access to an encrypted, immutable ledger of voting and membership rights ownership. The tokenized fan-voting platform uses Fan Tokens, which operate on a separate permissioned side chain. The Fan Tokens are limited in number, and are fungible, meaning their ownership can be traded, and their price is driven by the market. The platform is being developed to help sports teams increase fan engagement and achieve essential investment from fan-monetization. The venture was inspired by the fan-led management frameworks or 'socios' of some major football clubs. Dubbed 'Socios 2.0', the platform simply represents the digitisation of this model of management. Earlier this year, the team behind Socios.com raised more than $66 million in funding, including investment from some of the world's largest cryptocurrency exchanges (Binance) and leading Asian crypto funds.