KANAZAWA, Japan, May 8, 2019 /PRNewswire/ -- Researchers at Kanazawa University report in ACS Omega a promising combination of radioisotope-carrying molecules for use in radiotheranostics — a diagnosis-and-treatment approach based on the combination of medical imaging and internal radiation therapy with radioactive elements. 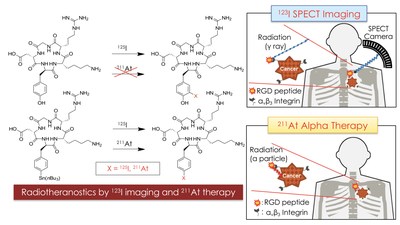 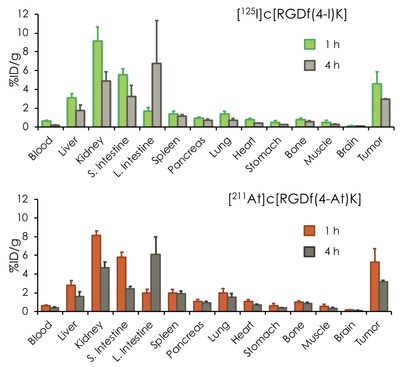 Radioisotopes — atoms displaying radioactivity — can be used for both diagnosing and treating cancer.  For diagnosis, radioisotopes that emit gamma rays are used because of their penetrating capability, while for treatment, isotopes emitting alpha particles, beta particles, or similar cytotoxic radiation are needed.  (Cytotoxicity refers to the ability to kill or damage cells; in this case, cancer cells.)  In recent years, an approach combining therapy and diagnosis both based on radioisotopes, called 'radiotheranostics', has gained significance.  The key idea is that both the diagnostic and the therapeutic isotope can be brought to a tumor by attaching it to the same carrier molecule.  Now, Kazuma Ogawa from Kanazawa University and colleagues have synthesized a radiotheranostic system with astatine (At-211) as the alpha-particle emitter and iodine (I-123) as the gamma-radiation source.

A few types of molecules can be used as radioisotope carriers.  Ogawa and colleagues were able to use a peptide (a biomolecule consisting of a chain of amino acids) as the carrier for both the astatine and the iodine isotope.  Specifically, they worked with a peptide containing the so-called RGD sequence of amino acids.  The RGD motif plays an important role in cell membrane binding; its cell-adhesive activity makes it a good component for designing molecules for targeting tumors.

The theranostic carrier molecules were synthesized through a series of chemical reactions, the last step being a halogenation — the replacement of a particular molecular component by a halogen.  (Both astatine and iodine are halogens, having similar chemical properties.)

After the successful synthesis of the At-211 and I-125 carrier molecules, the researchers tested their behavior in vivo.  They simultaneously injected the two compounds in tumor-bearing mice, and looked at the biodistribution of the radioactive isotopes — that is, in which parts of the body they occur, and how abundantly.  The main finding was that the At-211- and I-125-labeled RGD peptides displayed biodistributions that were very similar, with a high accumulation in the tumor — a prerequisite for operating as a theranostic system.  (Another iodine isotope, I-123, is foreseen to be the diagnostic radioisotope, but I-125 has a much longer half-life, making it easier to work with in the present experiments.)

The work of Ogawa and colleagues is an important step forward in the development of radiotheranostics. Quoting the scientists: "This method could be applicable to other peptides directly targeted to cancer. Moreover, future efforts should be focused on application of other radiohalogens … as positron emitters for PET [positron–electron tomography] imaging … ."

The goal of combining both diagnosis and treatment in one approach based on radioisotopes has led to the concept of 'radiotheranostics'. The key property of a radiotheranostic system is that both radioisotopes target the same area in the body, a tumor in the case of cancer — their biodistribution has to be the same.

Kazuma Ogawa from Kanazawa University and colleagues have now developed a radiotheranostic system, with an astatine isotope as the alpha-particle source and an iodine isotope as the gamma-ray source.  Importantly, both atoms are halogens; because they belong to the same group in the periodic table, they have similar chemical properties.  Because of this chemical similarity, the scientists could use the same carrier molecule for both isotopes (the carrier molecule delivers the radioisotope to the targeted body part).

As the leading comprehensive university on the Sea of Japan coast, Kanazawa University has contributed greatly to higher education and academic research in Japan since it was founded in 1949. The University has three colleges and 17 schools offering courses in subjects that include medicine, computer engineering, and humanities.

The University is located on the coast of the Sea of Japan in Kanazawa – a city rich in history and culture. The city of Kanazawa has a highly respected intellectual profile since the time of the fiefdom (1598-1867). Kanazawa University is divided into two main campuses: Kakuma and Takaramachi for its approximately 10,200 students including 600 from overseas.